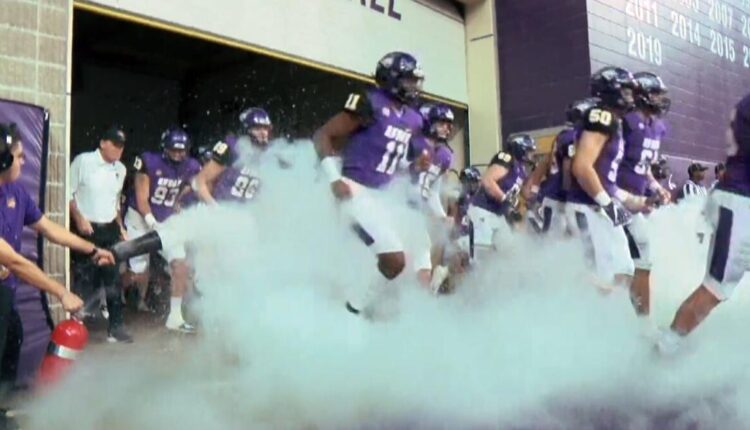 CEDAR FALLS(KWWL)–Mark Farley/UNI Head Football Coach, “There is a confidence when you play at home—there is an environment you feel more comfortable in. “And we need that for our football team–we are growing on offense—we need to recapture it on defense…”

In last week’s game at North Dakota the Panther offense made tremendous strides. Quarterback Theo Day directed an offense that produced 449 yards of total offense…with Dom Williams rushing for 103 yards 2 touchdowns–while Deon McShane and and Sam Schnee both collecting more than 100 yards receiving…Farley believes s an offense that can only get better.

Mark Farley, “Because they have depth they have talent–quarterback is getting better each week the first two weeks…and Deion McShane he came out the gates almost we still have Wolf and Qwan and Sergio a lot of names there but Deion has lit it up in the first two weeks.”

Farley said, “Sacks would have helped us the other week third down scrambles that got first downs for them and we had enough coverage ability early in the down…but as it transpired he’d get around the pocket and scramble and scramble and throw for a first down. Actually that was the play that ended the game on 3rd and ten.”

Now UNI will face an explosive Sacrament State team from the Big Sky Conference that rushed for nearly 380 yards two weeks ago in beating Utah Tech 56-33 in its season opener.

But Coach Farley believes this week–the Panther defense has to get back on track—and he says that starts with being at home.

“The crowd plays a factor on defense probably more than any other part of the game–because they are factored into the play–what happens in the play is how loud your crowd is during the play on defense….”

The UNI vs Sacramento game kicks off at 4pm on Saturday. The Panthers won last year’s game 34-16.