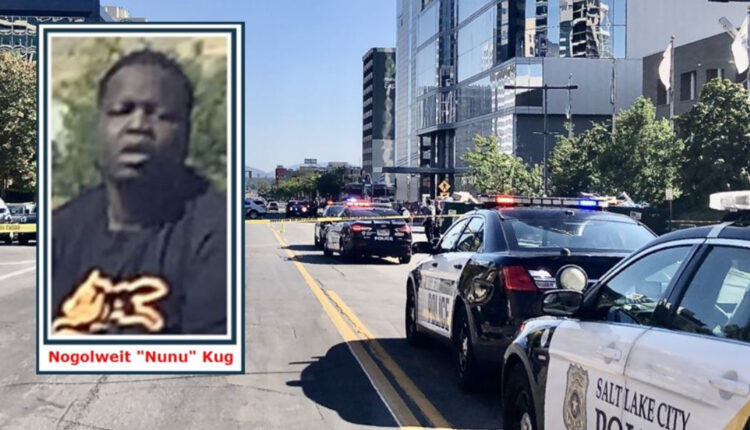 Joshua Riak, 21, was arrested Monday following a traffic stop on Modesto Avenue near Modesto Park, 1175 S. 1000 West, according to a news release from the Salt Lake City Police Department.

Riak was booked into the Salt Lake County Jail for investigation of murder and aggravated robbery, both first-degree felonies, in the death of Deliford Knight, 41.

Police have released a photo of Kug and are asking for the public’s help locating the man. Detectives say Kug should be considered armed and dangerous, and anyone who encounters him should call 9-1-1. The man may have left Utah, but his location and method of travel are unknown, police said.

“According to information provided to detectives, Knight and his friends have traveled to similar conventions in different states where they engaged in betting matches to defraud people out of money,” the release states.

Witnesses told police Riak became angry after losing money to Knight in a “shell game” and followed him out of the convention center and onto West Temple, according to a probable cause statement filed Monday in Salt Lake City’s 3rd District Court.

“While on West Temple, the three suspects started fighting with Knight, assaulting him, and tried to get back the lost money,” the police statement says. “At some point, Kug, while in the presence of Buk and Riak, took out a gun and shot Knight.”

Police say Riak and Kug also stole a cellphone and cash from Knight’s pockets before leaving the area in a vehicle.

After being taken into custody, Riak “admitted to being involved in the aggravated robbery and removing items from the victim after he had been shot and was on the pavement,” according to the probable cause statement.

Police say Riak is on probation in Alabama on a previous felony charge. The man had told his probation officer he planned to “rent a car and drive to Alabama” Monday, court documents state.

Anyone with information about the shooting is asked to call Salt Lake City police at 801-799-3000.

How extreme heat in Central California can impact mental health

Author Fair to be held at the Modesto Library | community