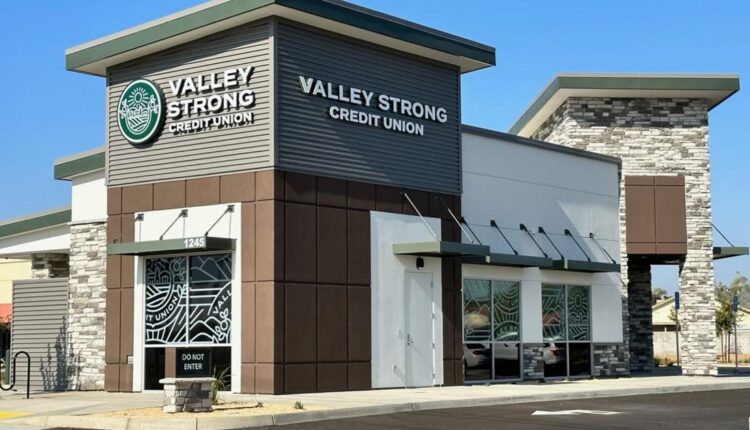 The growth spurt at Kern’s largest financial institution continues with the soft opening this week of a new branch in Dinuba and word that it plans to open another location late next year in western Bakersfield.

Both developments announced this week by Valley Strong Credit Union bolster its presence in existing markets rather than push its geographical bounds, as it has done largely through mergers and acquisitions since kicking off a rebranding and expansion drive in early 2020.

Its new branch at 1425 W. El Monte Way in Dinuba fills a geographical coverage gap and gives Bakersfield-based Valley Strong a fifth location in Tulare County, one with full-service traditional banking to complement the mobile and online access it offers customers. With an ATM and drive-up teller services, the branch’s lobby is open from 9 am to 5 pm Monday through Thursday, 9 am to 6 pm Friday and 9 am to 1 pm Saturday.

In Bakersfield, Valley Strong plans to open a location at the corner of Heath Road and Stockdale Highway serving The Ranch at Stockdale River Ranch. There the branch will join tenants including a Dewar’s Candy Shop, Me-n-Ed’s pizzeria, Wooddale Market and a Sully’s Chevron station.

“We are proud of our ongoing efforts to serve our members and communities throughout California,” Valley Strong President and CEO Nick Ambrosini said in an email statement. “While changing consumer habits and technology often get much of today’s limelight, many still prefer the traditional banking model — including branch ubiquity and face-to-face service — so exploring opportunities to open new locations remains a key part of our strategy going forward. ”

Not including two administrative offices in the Bakersfield area, the credit union now operates 31 branches across the Central Valley serving 293,000 members, many of whom joined after Valley Strong last year joined with Stockton-based Financial Center Credit Union, which came with six branches, and Fairfield’s three-branch Solano First Federal Credit Union.

Valley Strong’s assets have grown to about $4 billion, more than twice its size three years ago and well ahead of the goal it outlined in January 2020 of reaching $3 billion in assets by 2025. By other measures of its growth, the credit union had just 16 branches at the end of 2020, when it counted 190,000 members.

The credit union’s plan at Stockdale River Ranch will put it within a community that has been master-planned by Bolthouse Properties. The developer said it sees Valley Strong’s tenancy within a 15-acre commercial and retail development as helping to meet the needs of residents in a relatively new and underserved part of town.

“As Bakersfield continues to expand west, Bolthouse Properties recognizes the importance of providing goods and services at The Ranch that will meet the everyday needs of neighboring residents,” Executive Vice President Bruce Davis of Bolthouse Properties said in a news release Thursday. “It’s a privilege to partner with Valley Strong, who also recognizes this opportunity and shares our desire to serve this community.”

Only On: Modesto nuns haven’t had heat or hot water since May, what gives?