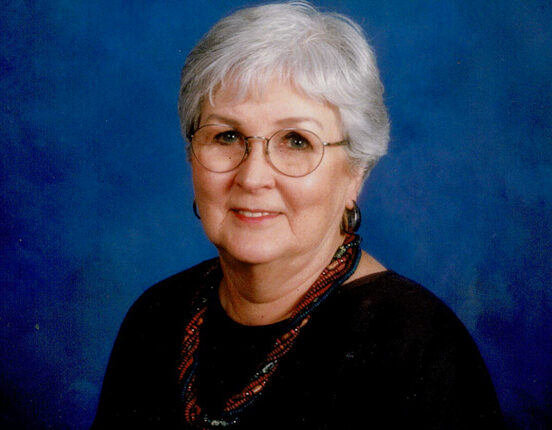 Virginia Myrl Slentz left her Earthly home to join her Heavenly Father on Nov. 7, 2022 at the age of 95.

Myrl was born February 21, 1927 in Comanche, Oklahoma to Reverend HG Bohannan and Beulah Rutherford Bohannan. As a child of a minister, she lived many places throughout Oklahoma and Texas. In 1944 she moved to Kilgore, Texas where she graduated high school. In 1947 she married JR Slentz. They moved to Denver City, Texas in 1953. She continued to call Denver City home until she moved to Fort Stockton in 2015.

She was a loving, caring stay at home Mom to her three children where she was involved with their school, sports and church activities.

In 1975, after her children had graduated high school, she went to work for the Denver City Chamber of Commerce as the executive vice president. She so loved her community of Denver City and enjoyed promoting and organizing various city and community events. She considered her greatest accomplishment during her 28 years with the Chamber to be the initiation of the purchase of 54 acres of land now known as the Sante Fe Addition.

In 1997, after years with the Chamber and serving her community, she retired to spend time visiting her children and grandchildren and taking care of her two little Yorkies, Missy and Cindy. After retirement she especially enjoyed her home and sitting in her backyard visiting with her dear friend and neighbor, Bob Thurston.

She was a lifetime member of the Church of the Nazarene where she served as church secretary and member of the fellowship committee for many years.

In 2015 she moved to Fort Stockton to be near her daughter and family.

She was preceded in death by her parents, a sister Charlsie Sanford Parenti, and a grandson, Samuel Steven Slentz.

A celebration of life was held Saturday November the 12th at the Church of the Nazarene in Denver City. Burial followed at Denver City Memorial Park.

“I have fought the good fight; I have finished the race; I have kept the faith”

Her family would like to thank Yolanda DeLaRosa for her excellent care and friendship, as well as all the staff at McCamey Convalecent Center.

Donations may be made in her memory to the Denver City Church of the Nazarene or to the SPCA (Society for the Prevention of Cruelty to Animals) or to a charity of your choice.