Warriors remain winless on the road, fall 122-115 to Sacramento 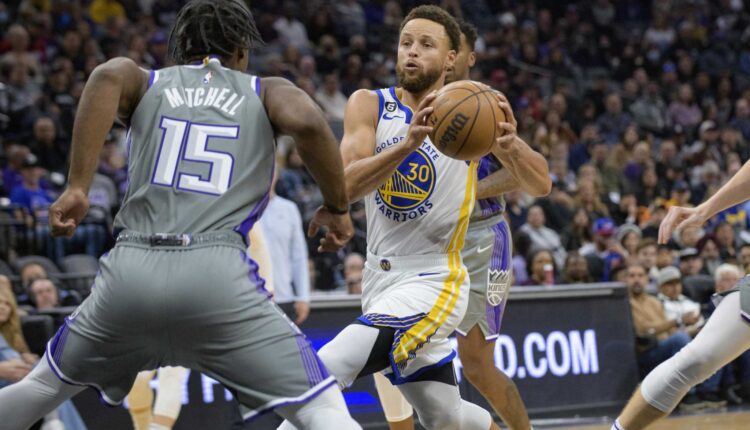 SACRAMENTO — The Golden State Warriors led the Sacramento Kings by 13 points after one quarterback behind a red-hot Stephen Curry, an aggressive Jordan Poole and a surprisingly formidable defense. What transpired over the next 12 minutes of play, however, is probably the biggest reason why the defending NBA champions remain winless on the road in seven tries.

“You just have to understand that your margin for error on the road, and this league, is way less if you want to win games,” Draymond Green said. “So it’s just something we have to figure out

In a 122-115 loss, things began to unravel for the Warriors in the second quarter while Curry sat. Golden State led 32-21 when Klay Thompson subbed in for him with 1:58 left in the first quarter. By the time Curry returned with 8:04 left in the second quarter, the Kings were able to trim that lead down to five. Sacramento was then able to maintain that momentum through the rest of the quarter and led 64-62 at halftime.

“I thought in the second quarter it was the turnovers that hurt us,” head coach Steve Kerr said. “We weren’t executing well offensively and that hurt our defense, put us on our heels some.”

The Warriors were outscored 38-23 in the quarter, had eight of their 18 turnovers, shot just 2-of-10 from 3-point range and committed eight fouls, which led to 11 free throw attempts for the Kings. It marked the 12th time this season Golden State has surrendered at least 30 points in a quarter.

Leading 98-91 entering the fourth quarter, the Kings stayed in front at 107-98 when Curry checked back in with 9:03 left. He fueled a rally with a pair of 3-pointers and when Thompson dropped in a 24-footer the Warriors had taken the lead on the strength of a 13-2 run. The momentum didn’t last, however, as the Kings returned the favor with a 13-4 game-ending run to drop the Warriors to 5-8.

Domantas Sabonis led five kings in double figures with a dominant 26-point, 22-rebound outing. De’Aaron Fox added 22 and Keegan Murray 21 for Sacramento (6-6), which has won three straight and six of eight after an 0-4 start.

The Kings thrived off Warriors mistakes, as they turned 18 Golden State turnovers into 26 points. Curry and Poole each had four, Green and Kevon Looney three apiece.

“We’ve always been a high-turnover team,” Kerr said. “Even winning championships, we’ve been a team that turns it over. But there’s kind of a time and a place for some. You accept some and then others you know you have to clean up. And so we’ll continue to work on that.”

With 27 points, Curry was held under 30 for only the third time this season. Poole finished with 18 points and Andrew Wiggins 26.

Last Monday, Curry took 24 shots and dropped 47 points on the Kings. Sunday, Curry attempted just 17 shots, thanks in large part to the Kings’ defensive adjustments. They sent double teams Curry’s way throughout the game and sometimes threw box-and-1 looks at the Warriors’ star.

Despite receiving that defensive focus, Curry isn’t looking to rest. He told reporters after the game that he “absolutely” plans to play in Monday’s home game against San Antonio.

This is the first time the Warriors have started 0-7 on the road since the 1989-90 season. No defending champion since the 2011-12 Dallas Mavericks has lost seven straight road games at any point in a season, per ESPN Stats & Info.

“I think we’re taking steps in the right direction, I feel like this game was better than our last few road games,” Looney said. “So we just have to keep growing as a team, keep getting better and I think the wins will come.”.

Added Curry: “Just have to keep figuring it out in terms of trying to put together a complete game knowing the other team is going to feed off their home crowd and probably play better than you expect.”