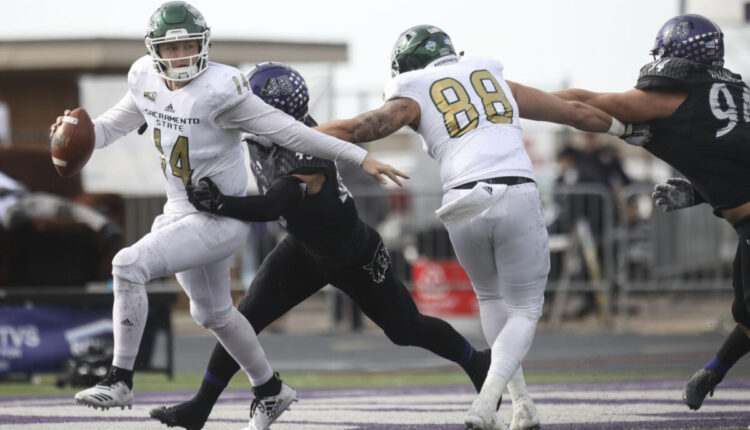 Sacramento State quarterback Wyatt Clapper (14) is sacked by Weber State’s Landon Stice (45) near the end zone, narrowly escaping a safety, in the second half Saturday, Nov. 3, 2018, at Stewart Stadium in Ogden.

No. 5 Weber State football plays in the third of three consecutive games against teams ranked in the top 10 when No. 2 Sacramento State comes to Ogden on Saturday.

The two teams haven’t played since 2019 and it’s been since 2018 that the Hornets have played at Stewart Stadium.

To learn more about the Hornets, I asked five questions of Cameron Salerno of The Sacramento Bee.

1. First, give me a big-picture feel for what Troy Taylor has done at Sacramento State. In two full seasons, he’s led the Hornets to two Big Sky titles and a third is possible. Sac State is 20-1 in Big Sky games in his tenure. What are a few of the key things he’s done to instantly catapult his team to national relevance like this?

Salerno: The first thing Troy Taylor has done is recruit local. It sounds so simple but Sacramento and Northern California high school football is top-notch. Sac State went from getting average talent to some of the best players in the region. That helps a lot. Taylor hired a really good staff and most of them were from Folsom High School, which is the top high school football program in Sacramento.

Taylor has done a great job of building a good culture and maintaining relationships with the other area coaches. That’s what the main factor was/is for Sac State’s success. I’ve grown up in Sacramento my entire life. Seeing Sac State go from a Big Sky afterthought to a national championship contender in the FCS has been unreal. The city is buying in. Sac State had over 15,000 fans for the Montana game and over 17,000 for the Idaho game. That has never happened before outside of a game with UC Davis, Sac State’s biggest rival.

2. So in that 20-1 mark, that 1 is Weber State almost exactly three years ago, a game WSU won convincingly the last time the two teams met. Is there a sense that matters to anyone, or is it more about the context of this season that matters?

Salerno: I remember that Weber State-Sac State game vividly. Sac State’s quarterback at the time, Kevin Thomson, got knocked out early and didn’t return. Weber State dominated that game and after Thomson got hurt, he was never the same.

This is a huge game because if Sac State can win this week, there’s a clear path to 11-0 and the top seed in the FCS playoffs. Weber State is the only team Sac State has had trouble with in the Taylor era. Not to sound cliche, but I don’t think the players are thinking about that too much. There are only a few players who were on that roster in 2019. Everyone knows that Weber is the final game of the Big Sky gauntlet. Every game from here on out becomes the biggest game of the season for obvious reasons in the context that every win is closer to another Big Sky title.

3. One of Sacramento State’s wrinkles is starting Jake Dunniway at QB but subbing in Asher O’Hara for a wicked run game package. Has there seemed to be a rhyme or reason as to when Taylor calls on O’Hara and this power run game?

Salerno: Asher O’Hara is so dynamic. The 1-2-3 punch of O’Hara, Cameron Skattebo and Marcus Fulcher in the run game is one of the best in the country. Taylor has stuck with the two-quarterback system and it’s worked. Brian Berger, Sacramento State’s football SID pointed out to me yesterday that Dunniway has thrown a touchdown pass and O’Hara has run for a score in every game.

O’Hara is Sac State’s closer. He had the game-winning touchdown in OT vs. Montana and against Idaho the following week. Sac State’s passing game isn’t as good as last season, but the running game has helped bring the offense to the next gear. If it ain’t broke, don’t fix it.

4. The Hornets aren’t as known for what they do defensively, but they have playmakers who are certainly doing plenty enough to win games. Who are the standouts making plays on defense?

Salerno: Armon Bailey has been Sac State’s defensive anchor this season. He had three sacks last week vs. Idaho and had a strip-sack to seal the Hornets’ win. The other guy who generated a lot of hype before the season was outside linebacker/nickel back Marte Mapu. He’s been very good this season and has a case to be All-Conference again.

I told people before the season they would have to be patient with the defense. I think Sac State only returned two or three starters from that side of the ball, so it’s been an adjustment. Linebacker Brock Mather has made plays and had a pick-six vs. Eastern Washington last month. Despite all of this, Sac State’s defense is third in PPG allowed (in the Big Sky), which is impressive. Andy Thompson, Sac State’s defensive coordinator, is one of the best in the business.

5. It’s snowing in Ogden as I type these questions. Saturday will be cold and rainy. The Hornets have O’Hara and running back Cam Skattebo, certainly, so what effect would a wet, cold day have on Sac State’s strengths and weaknesses?

Salerno: Sac State LOVES to run the football. It’s been cold and wet in Sacramento this week, but nothing compared to how it is in Utah right now. I don’t remember the last time Sac State played in the snow but it has to be a while. It’s pretty obvious that Sac State is going to live and die by the run, which has worked this season and why those conditions could favor Sac State. The Hornets rank second in run defense (in the Big Sky), so that could also help if Weber State wants to run the football.

I honestly think this is a great matchup. Weber State and Sac State are two of the three best teams in the Big Sky. A win for either side will be huge for conference championship hopes.

Haven’t Seen Your Doctor in a Few Years? You May Need to Find a New One