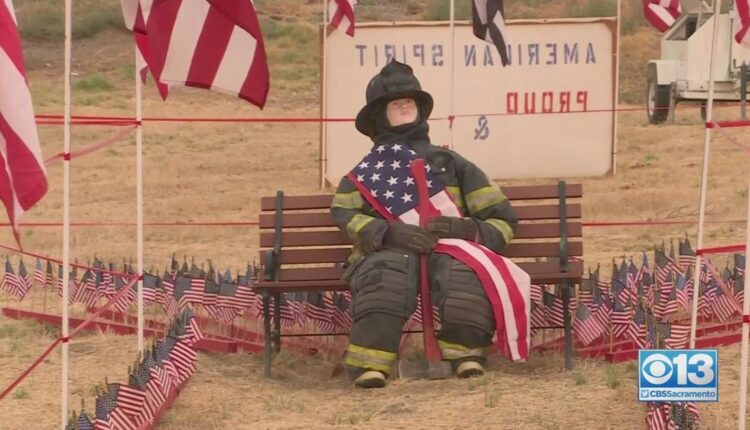 SACRAMENTO — Christina Vinson pours her heart into an annual 9/11 tribute in West Sacramento.

“We have to drive rebar into the hard ground over 300 times for each of these flagpoles that you see here,” said Vinson.

Building the tribute takes about a year leading up to Sep. 11.

There’s one flag for each of the nearly 3,000 people killed in the attacks.

“We have a Flight 93, a Pentagon … we also have a firefighter area for the firefighters lost that day as well as police and EMT,” Vinson said.

And then there’s Scott Raab, who didn’t just fly the flag; he wore it on a military uniform.

“When 9/11 happened I came downstairs, the TV was on. My ma, she couldn’t believe what was happening,” said Raab.

Raab said he signed up for the Navy shortly after.

The Navy veteran is now the outreach director for Move America Forward, a Sacramento nonprofit that sends care packages to troops on 9/11.

“It’s more important than ever to remember the events of 9/11 because at any time, something like that could happen again, and it’s only because of our troops overseas that it doesn’t,” said Raab.

“Teaching them about the history of what happened here is important. This is my generation’s pearl harbor,” said Vinson. “That’s why I feel strongly about this field.”

Both organizations count on volunteers and donations not just on 9/11 but year-round.

Marlee Ginter is an Emmy Award-winning investigative journalist. She joined CBS13 in January 2020 from WOOD TV8 in Grand Rapids. Prior to that she worked at KOMO TV in Seattle, WA, WISH TV in Indianapolis, IN, WSPA TV in Spartanburg, SC and WTOC TV in Savannah, GA.

Freezing and near freezing temperatures felt across the Sacramento Valley