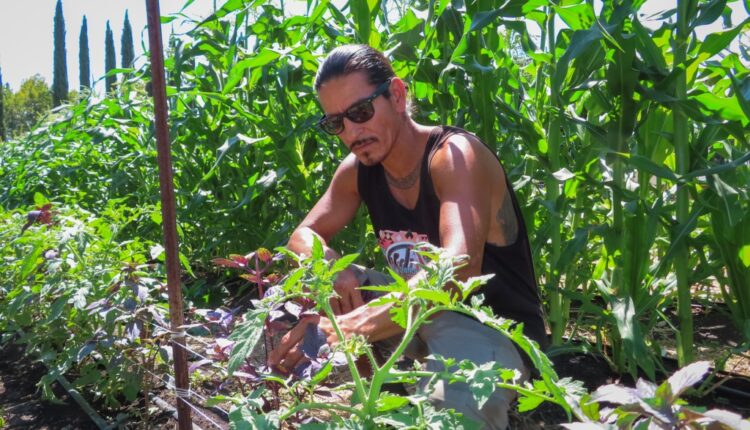 After nearly 20 years of incarceration, West Sacramento native Alfred Melbourne set out to begin his nonprofit farm organization aimed at bringing his community together and providing an engaging opportunity for West Sacramento youth to get involved in.

Three Sisters Gardens was created in 2018 by Melbourne and is based on traditional native teachings of “protecting our mother earth and respecting all living things.” His main goal was to give back to the community by inspiring and empowering youth through gardening.

“Like the three sisters legend of companionship plantain,” the organization’s website stated. “Three Sisters Gardens believes that our communities can begin to heal and thrive when all components – the youth, adults and elders – are working together.

The nonprofit donates 40% of its crops to local food programs and homes, according to its website.

Alfred Melbourne shows how many different foods – such as tomatoes, cherry tomatoes, green bell peppers, corn and more – can be grown on one parcel of land Tuesday at 5th & C Street Farm in West Sacramento. (Gerardo Zavala/Daily Democrat)

Melbourne – who is part of the Hunkpapa Lakota tribe – explained that growing up in the Bryte and Broderick area of ​​West Sacramento was about being tough and that there was a lack of good role models in the community.

“After having spent 18 years incarcerated, the lights went on for me and I just knew that there had to be a different way,” Melbourne recounted. “When I came home in 2016, it was about creating change and being the change out here in the community and giving these youngsters an opportunity.”

With help from tribe elders, Melbourne cleaned up a small parcel of land that would become the first of several farms comprising Three Sisters Gardens.

“From one small little field it quickly turned into two, then three and now we have four spaces out here connecting us with so many community members that we wouldn’t have met had we not had these spaces,” he stressed. “I tell a lot of folks that it’s more than just lettuce, we’re growing community. It’s giving us connections to the city council, county supervisors and a lot of confidence to go and speak up for what we know we’re missing out here.”

Four years later and the nonprofit’s main goal is now to “connect the elders, the adults and the youth” to create a thriving community, which Melbourne argues is much needed in his community that is classified as a food desert.

“We just need to ground them again, actually get their hands back in the soil and bring the elders out that have the knowledge and the wisdom to share and the adults that can help…be that solid in-between to make a connection.”

While there are many obstacles the farm is currently dealing with, Melbourne argues that one of the main challenges is that the Center for Land-Based Learning – the organization that runs the Urban Farm Business Incubator Program Melbourne is a part of – has access to much of the resources, knowledge and tools that would benefit organizations like Melbourne’s.

“We are ourselves also a nonprofit organization from this community so it becomes very competitive when we are going after the same pot of money,” he explained. “Being a participant in that program, there are certain guidelines, certain things that we have to abide by…but we’re trying to do our own thing because our mission and visions are different.”

Melbourne said his goal is to provide food directly to the community that he’s from, noting that his community has been far behind other communities in West Sacramento and in the county.

“The challenges are that much greater when we see a larger organization that could help us a lot more than seeing us as competition,” stressed Melbourne.

Melbourne believes that the Center and Three Sisters Gardens should have a better working relationship on a level playing field than partners, although their relationship is currently as lessor and lessee due to the nature of the program.

Sridharan Sethuratnam, California Farm Academy Director for the center since 2016, explained that most people who participate in the farm business incubator program do so as individuals. However, the center made an exception when they learned about Melbourne’s nonprofit’s interest in joining the program.

Sethuratnam noted that while it is possible for small farm businesses to expand after participating in the program, the difficulty to do so stems largely from the lack of land available and the cost of viable land when it does become available.

“What they do after is a huge problem and it’s a problem that just cannot be solved by nonprofits alone because most of the ag land is already taken,” he highlighted. “For instance, in Yolo County, all the best lands are gone and if they come up for sale they’re really expensive.”

He used an 18-acre parcel of land in Woodland currently being sold for around $800,000 as an example.

“Nobody has the money to buy it,” he argued. “This is a societal issue and society needs to band together with farmers, service providers, nonprofits and other entities to see how we’re going to transform this.”

While the center and Melbourne sometimes don’t see eye-to-eye on certain aspects of their relationship, Sethuratnam reemphasized that the center is happy to work with Melbourne and is proud of all the work he has done to improve his community.

“On the social side of things, what he’s doing is much needed,” he remarked.

Melbourne has also been quick to call attention to his community’s needs by reaching out to elected officials, most recently when he attended US Agriculture Secretary Tom Vilsack’s visit to the Yolo County Food Bank in late July.

Melbourne asked Vilsack how he intended to reach farmers like him who are not experienced with the process and paperwork involved in applying for grants or for help from programs like the Local Food Purchase Assistance Program Vilsack was announcing.

Vilsack’s response to Melbourne’s question was that, as part of the American Rescue Plan, the Department of Agriculture received resources to hire “cooperators” – groups of organizations with connections to historically underserved producers and small-sized farming operations – to provide technical assistance.

“Initially, we awarded $75 million to 20 different large-scale operators that are currently now making those connections and providing that technical assistance,” Vilsack emphasized.

“What he told me was that they’re spending a lot of money on some other people to come out here and help us get the money but I still haven’t seen any of it,” Melbourne recounted. “We know that they’re hiring a whole bunch of people to fill a bunch of positions when they could just take that money and give it directly to us and we can hire people to help us navigate these things.”

“Just give it to us and watch what we do,” he argued.

Additionally, Melbourne said that he and other indigenous people have been tokenized in the past and sees programs like these as another political attempt to tokenize small farmers without actually providing the help they promise.

“They talk about equity this, equality that and with these words should come funding, should come resources, should come tools but, again, we’re not seeing any of it,” he stressed. “We’re just the face of what they’re saying they’re going to do when their actions fall short of their words.”

To learn more about Three Sisters Gardens or if interested in making financial contributions, visit 3sistersgardens.com.