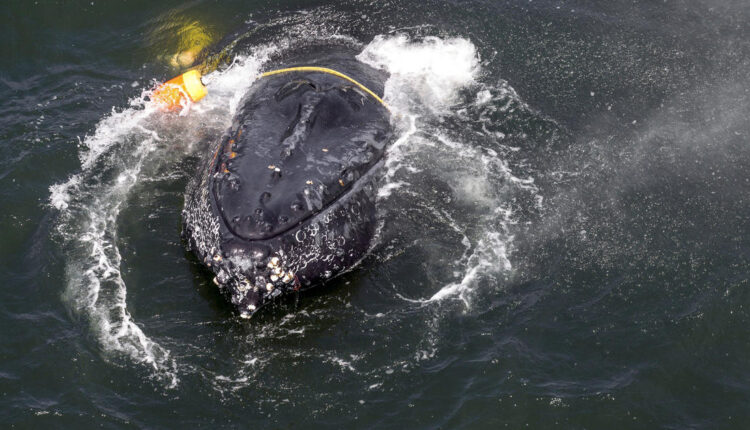 SAN FRANCISCO — For the fourth year in a row, the start of the commercial Dungeness crab season in California will be delayed to protect humpback whales from becoming entangled in trap and buoy lines, it was announced Monday.

The California Department of Fish and Wildlife announced that it was delaying the start of the commercial season, which traditionally begins Nov. 15, until further notice for waters between the Mendocino county line and the border with Mexico.

Authorities first announced a delay late last month. The situation will be reassessed on or before Dec. 7 and if conditions allow commercial crabbing could be permitted on Dec. 16, the department said.

The crab industry is one of California’s major fisheries and the shellfish is especially popular around the holidays, said Geoff Shester, California campaign director and senior scientist at the nonprofit conservation group Oceana.

“A lot of people eat crab instead of turkey out here for Thanksgiving,” he said.

However, humpback whales can get caught in the vertical ropes connected to heavy commercial traps, which they can drag around for months, leaving them injured, starved or so exhausted that they can drown.

The fish and game department said there have been 15 confirmed entanglements of humpback whales by fishing gear off California this year, including three involving Dungeness crab gear.

Humpback whales migrate north annually from Mexico’s Baja California peninsula where they birth calves. In spring, summer and fall the humpbacks feed on anchovies, sardines and krill off the California coast before heading back south.

Aerial surveys taken on Nov. 9 showed there were still at least 39 whales in one ocean zone while commercial whale-watching trips have reported one or two dozen a week in other areas, the fish and wildlife department said.

In addition to the delay because of whales, the commercial Dungeness crab season in Mendocino, Humboldt and Del Norte counties was delayed until Dec. 16 because tests showed the crab meat was of poor quality, the department said.