What Sacramento landmarks did Starbucks include in the localized mug 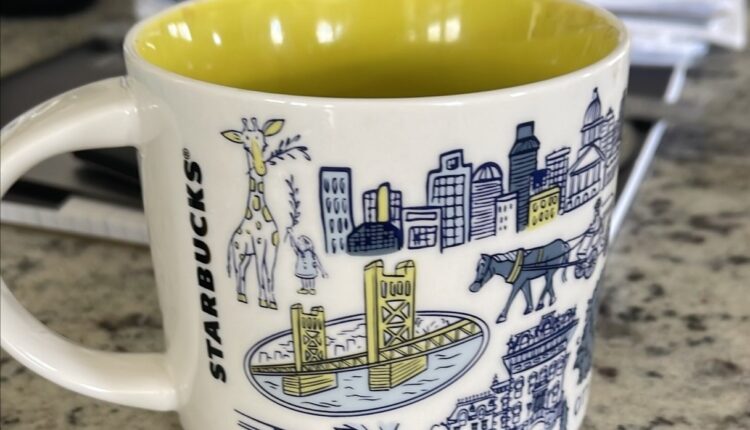 (KTXL) — When Starbucks launched its “You Are Here” collection in 2013, Sacramento was one of the select cities where collectible mugs can be purchased locally.

The Sacramento-designed mug is an homage to the city with icons that include the Tower Bridge, a landscape of the city’s skyline, the Delta King, a train, a gold panner, a giraffe, a grizzly bear and trees.

Both slogans that have appeared on the locally-famous water tower, “City of Trees” and “America’s Farm-to-Fork Capital,” are also displayed on the mug.

Which Starbucks in California have unionized?

According to Starbucks spokesperson Alli Colzani, the designers of the mug are from the Bay Area, but connected with family in Sacramento for recommendations for the mug’s icons.

Colzani was unable to share the names of the designers but mentioned that the designers usually tap into their personal networks as well as Starbucks employees from the different cities to ensure there’s a local perspective on the mugs.

“The mugs are designed by a variety of artists who design each location to bring to life the local vibrance of each community,” Colzani said in an email. “Some designers put in personal touches as part of the designs, including friends and family.”

Why doesn’t the Delta King Hotel move from its place on the Sacramento River?

The gold paneer represents the gold rush and the rich history of Sacramento and California, Colzani said. The giraffe is meant to represent the Sacramento Zoo.

As for the train, Delta King and Tower Bridge, those icons represent Old Sacramento’s Waterfront being a prime trading spot for merchants and miners in the city’s early days.

“Supplies and mail were then brought by river and sea, across deserts and through mountains to get provisions to people throughout the Golden State,” Colzani said. “To create quicker and more reliable transportation, the first passenger train west of Mississippi was constructed in 1855 from Sacramento to Folsom.”

When the collection was launched, Starbucks released specialized mugs in 36 cities and 23 states including Sacramento, Boston, Hawaii, Pike Place Market in Seattle, Philadelphia and Miami. It currently features 400 global destinations.

The collection evolved to include the “Been There” line, which has 300 destinations around the world, according to Colzani. Disney and Star Wars designs are also available at participating Disney locations.