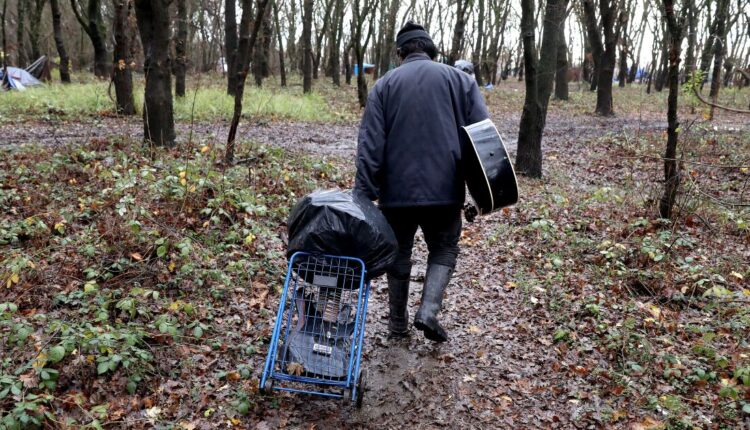 More than 375,000 customers lost power in Northern California as the latest powerful winter storm pushed through the region, elevating the danger for flooding and bringing intense winds that downed trees.

Wind gusts topped 60 mph in some parts of the Sacramento region, according to the National Weather Service, causing a massive loss of power. Utility officials have been working to restore power but said it will take time.

Pacific Gas & Electric, which has 130,000 customers without power, deployed 4,000 crew members dedicated to storm restoration, which includes their own personnel, contractors and mutual aid from Southern California and as far away as Wyoming and Canada.

“We are just getting repeatedly pounded by storm after storm,” said Tracy Correa Lopez, a spokeswoman with PG&E. “Flooding is an issue. The number one issue right now is access to a lot of these areas.”

Flooding, downed trees and unstable soil contributing to falling rock and debris flows are all likely to pose hazards for crews seeking access to turn the power back on, Correa Lopez said.

The NWS urged residents to be cautious and secure items because the intense winds will continue into Sunday evening. “Widespread power outages, downed trees and difficult driving conditions will be possible,” it said.

Californians should brace themselves for yet another series of destructive storms this week that will likely bring flooding and destructive winds to an already drenched and damaged region.

Forecasters warned of a “relentless parade of cyclones” barreling out of the Pacific toward California, which was expected to intensify the risk of flooding in parts of the state this week. A flood watch remains in effect for the Sacramento and San Joaquin valleys and nearby foothills until 4 pm Wednesday.

The first of five approaching atmospheric rivers — a stream of storms that will continue until about Jan. 19 — arrived this weekend. Heavy rain and mountain snow began late Friday night in Northern California and spread to Central California on Saturday, with some parts of the state expecting more than a foot of snow through early Sunday.

Forecasters expect this next storm moving in Sunday night to be more powerful than the last one, which walloped much of Northern California. Aside from some periodic breaks, much of the week is expected to bring heavy rain with more storms on the horizon, said Hannah Chandler-Cooley, a meteorologist with the National Weather Service in Sacramento.

Damaging winds, with gusts anywhere between 45 to 60 mph, are expected Sunday night until Monday morning in the Sacramento and San Joaquin valleys, Chandler-Cooley said. Southern Sacramento is expected to be hit hardest.

“Make sure you have provisions on hand in case you have long-term power outages and a go-kit or evacuation kit if there is flooding in your area,” she said.

Two to three inches of rain are expected in the region and anywhere from 2 to 8 inches in the foothills near Sacramento.

“Not only are the winds strong but the ground is already saturated,” Chandler-Cooley said. “It’s really easy for trees and powerlines to fall.”

In Sacramento, officials are preparing for an onslaught of 2 to 4 inches of rain on Monday. The city will extend emergency shelter services through Thursday as it prepares for more storms to hit the region.

This storm system that hit the region over the weekend brought significant wind and rain and topped trees all over the city, Sacramento Mayor Darrell Steinberg said in a prepared statement.

“We are gearing up for the next wave of storms and urging all of those still outdoors to please go to a respite center or at least get to higher ground away from trees and bodies of water,” he said.

Saturday evening, an unidentified unsheltered woman was killed when a tree fell on her tent. The Sacramento Fire Department said that it responded to a call around 6:45 pm for a traumatic injury as rain and dangerous winds began in the capital. Later, the department said the woman had not survived the injuries.

City officials confirmed the woman was unhoused and living along one of the many wooded river levees that have been the focus of outreach efforts in recent days, as advocates and social workers have attempted to warn people of the dangerous storms approaching and offer options for shelter. Those levees routinely flood during large storms.

“The fact that a human being lost her life in last night’s storm is heartbreaking,” Steinberg said. “Our outreach teams have been working along the levee and elsewhere in the city to urge people to go to one of our respite centers or at least get to high ground away from large trees.”

As of Sunday afternoon, the coroner had not released the woman’s identity.

Falling trees have been an unexpected hazard for Sacramento during this series of storms. While the City of Trees often sees them fall during rains, the number that have been uprooted is in the hundreds. Late Saturday night, winds howled through with a force that left giant redwoods, oaks and eucalyptuses with their roots torn from the ground, their trunks blocking streets, crushing homes and downing power lines.

Sacramento officials said they received nearly 700 reports of debris and fallen or uprooted trees blocking the roads since the New Year’s Eve downpour.

More than 200 of the reported incidents were cleared as of Friday, with officials citing the need for urban forestry professionals and more cranes to clear the backlog.

“Our city crews were well prepared for the challenge and have cleared hundreds of trees and thousands of storm drains,” Steinberg said. “We have stood up respite centers for unhoused residents and arranged shuttles to transport them.”

Trees continued to fall in the Bay Area on Saturday. In Castro Valley, a large eucalyptus tree fell on a home, trapping a person inside. The person was taken to a hospital for treatment, firefighters said. Two adults and four children were displaced.

San Jose officials were gearing up for what could be the worst flooding to hit the San Francisco Bay Area’s most populous city since the surprise flooding in 2017 of Coyote Creek, which runs through the heart of San Jose and forced more than 14,000 residents out of their homes and flooded hundreds of homes.

At the same time, the Guadalupe River in San Jose, at Almaden Expressway, was expected to exceed minor flooding levels at 9.5 feet and, by the afternoon hit a moderate flooding level of 11.5 feet. At 9.5 feet, river water is expected to “overtop upstream of Alma Avenue Bridge into the Elks Lodge,” located just south of the Tamien station of the Caltrain commuter rail system.

San Jose officials on Sunday planned to send workers to communicate evacuation orders to unhoused residents along the Guadalupe River and Coyote and Penitencia creeks.

“Threat to life is likely during these storms,” ​​the weather service said in a bulletin. “Soils remain saturated, which means a high risk of flooding and shallow mud slides. Expect rapid rises in creeks and streams as well as rises in mainstem rivers. Periods of strong winds with gusts of 40 to 60 mph [potentially higher in the mountains] could lead to downed trees/power outages.”

The National Weather Service warned they were watching many rivers for possible flooding including the Russian River in Sonoma County at Guerneville, forecast to reach moderate flood stage, and at Geyserville; Mark West Creek near the community of Mirabel Heights; Laguna de Santa Rosa at Stony Point Road west of Rohnert Park.

Other waterways of concern include Alameda Creek in northeastern Fremont and in the hills east of the city; Pacheco Creek southeast of Gilroy; San Lorenzo River north of Santa Cruz; the Pajaro River and Corralitos Creek around Watsonville in Santa Cruz County; and the Salinas River south of Salinas; the Carmel River along the Carmel Valley; the Big Sur River; and the Arroyo Seco south of Soledad.

In Mendocino County, the Navarro and Garcia rivers are already flooding highways. The Eel River near Arcata in Humboldt County is being closely monitored. In the Central Valley flooding is expected on the Cosumnes, Mokelumne and Tuolumne rivers. Bear Creek, which bisects Merced, could reach record flood levels, to 27.1 feet by Tuesday morning; the record is 24.65 feet in 2006.

In the Sacramento Valley, a weather system was expected to bring half an inch to 2 inches of rain, winds blowing up to 50 mph and potentially a thunderstorm before tapering off Sunday afternoon, said Katrina Hand, a meteorologist for the National Weather Service in Sacramento .

The deluge will continue, Michael Anderson, state climatologist for the Department of Water Resources, said in a briefing Saturday evening. “Monday and Tuesday is the second of five more storms and also the one that has our largest concerns right now,” Anderson said.

The “warmer, wetter and stronger” storm arriving Monday was forecast to dump 2 to 4 inches of rain on the Sacramento Valley and 3 to 7 inches on foothill and mountain areas, Hand said.

Hand said this system would be “particularly concerning,” as soil remains saturated and rivers and creeks are overflowing from the past week’s rainfall. The weather service has issued a flood watch for much of the interior Northern California area continuing through Wednesday afternoon, she said.

The Sierra was expected to see heavy snowfall starting Saturday night, which, combined with strong southerly winds, could create “near-whiteout conditions” in the mountains, Hand said.

In Capitola, a small town gracing the northern shores of Monterey Bay with a population of about 10,000, cleanup efforts are continuing. The damage already totals in the millions — including $10 million to $15 million for the Capitola Wharf, according to early county estimates — and many locals fear the toll will worsen with more rain in the forecast.

Public work crews “immediately” began to clean up after the first wave of storms and are scrambling to prepare for the deluge Monday night.

Beyer said businesses are assessing damages caused by the storm but said it is too soon to analyze the wreckage with another storm approaching.

“The primary concern is how long it will take to rebuild, and how other businesses will be affected in our tourism-based economy,” Beyer said in an email. “Hopefully, the damages won’t be as severe. We’ll just have to see.”

Officials in Santa Cruz County not only are watching waves batter coastal communities, they are keeping an eye on saturated soil in the mountains — which is becoming increasingly vulnerable to slides as rains continue.

Then there are the rain-swollen rivers. Typically, those rivers would rush downstream into the ocean. But given the size of the storm surge, water is getting pushed back as it tries to escape — flooding lowland areas along creeks and rivers, said Melodye Serino, a deputy county administrative officer.

She said residents are taking these lulls in the weather to assess and prepare. But that’s hard to do when it’s unclear where the threat is going to come from: rain, storm surge, flooding or all three.