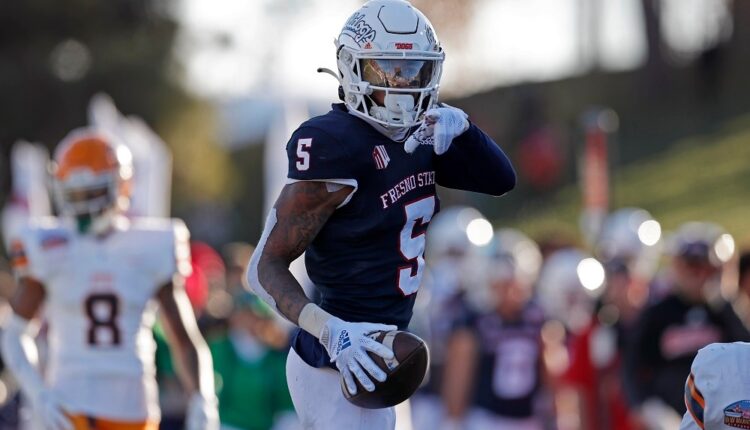 The Bulldogs wide receiver is the top-ranked pass catcher on our preseason countdown of the Mountain West’s best headed into 2022.

A local athlete leads the way.

Fresno State football has a history of getting the most from offensive talents within its backyard: David and Derek Carr, Bernard Berrian, Lorenzo Neal. While the current Bulldogs roster are stacked with athletes who rose to prominence from with the San Joaquin Valley, wide receiver Jalen Cropper is the best example of that pipeline in action and appears on our annual list of the Mountain West’s top athletes for the second year in a row.

Born in Parlier, California, Cropper spent time at two area high schools in nearby Sanger and Clovis before committing to the Bulldogs and then seeing a fair amount of action as a true freshman in 2019, five starts in ten overall games, doing literally a bit of everything: He finished that season with 652 all-purpose yards, three rushing touchdowns, and a passing score.

Given a more prominent role in 2020, Cropper would earn an all-conference honorable mention with 37 catches, 520 yards, and five touchdowns. In 2021, he emerged as one of the best pass catchers in the Mountain West with 85 receptions for 899 yards and 11 touchdowns, throwing a second career touchdown and running for two more scores for good measure. According to Pro Football Focus, that gave him an overall grade of 79.0 which ranked fifth among conference wide receivers and first among those back for 2022.

Needless to say, the Red Wave is excited to see what Cropper can do next to propel Fresno State toward another conference title. The real shame of it is that defenses won’t look forward to it at all

Here’s the 4 touchdowns for Jalen Cropper vs UNLV (all in 2nd half).

Cropper’s four receiving touchdowns tied the single game program record. He joins Davante Adams, Jim Molich and Charlie Jones as the only ‘Dogs to do so. @jcropper_5 pic.twitter.com/oUE2xAIifm