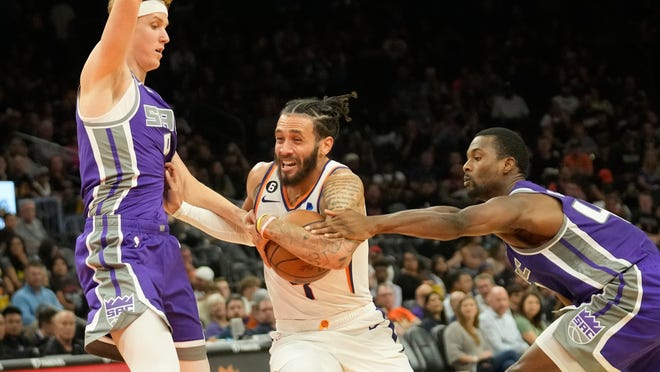 The Phoenix Suns were without their starting five and three reserves for Wednesday’s 105-104 loss to Sacramento at Footprint Center to round out preseason play.

The Suns had two chances to win at the end, but Washington Jr. missed a jumper and Biyombo failed to tip in the ball at the buzzer.

Phoenix went 1-2 in its final three preseason games against NBA teams after dropping the first one to Adelaide 36ers of Australia’s NBL.

The Suns open the regular season Oct. 19 against Dallas in a rematch of last season’s Western Conference semifinals they lost to the Mavericks in seven games.

Coach Monty Williams said Saric is dealing with a personal family matter, but expects him back for the Oct. 19 openers.

“He should be back before opening night for sure,” Williams said.

As for Johnson, Payne and Shamet, Williams isn’t as committed to saying all three will be ready to go by next week.

“It’s hard to say definitely,” Williams said. “They’re moving in a good place. Cam (Johnson), he dribbled today, which was a good sign.”

Johnson was dribbling with a wrap on his right thumb, but Payne and Shamet weren’t on the court during the media viewing portion of Wednesday’s shootaround.

“Cam Payne hasn’t been able to do as much with his hand,” Williams said. “Cam Johnson has done more and Landry’s pretty much day-to-day. We should have a better report this weekend, but it seems like they’re trending in a good place.”

While Johnson and Payne each suffered their injuries in the preseason win over the Lakers in Las Vegas, Shamet scored 21 points, hitting 5-of-7 from 3.

He was feeling good after that, but remembers experiencing tightness in the hip in ensuing practices.

“It was either one or two days before our last game (Monday at Denver),” Shamet said. “Just went downhill. It went from tight to strain.”

Shamet said he doesn’t foresee the injury being anything “too too serious” or long term.

“Just want to respect it right now while we can,” he said. “Get right.”

Of the three offseason signings, Landale has jumped off the board the most.

He averaged double figures in the preseason after putting up just 4.9 points as a rookie last season in San Antonio. Been very active, made hustle plays and scored around the basket with post moves to take advantage of mismatches.

On Wednesday, Landale played the four with Bismack Biyombo at the five. He guarded smaller players and continued to find his offense with 17 points.

Landale said he’s talked to Ayton about playing the four and likes the idea of ​​feeding Ayton inside. If Landale consistently finds his shot from 3, the Suns may like that even more.

Damion Lee has been solid and Josh Okogie is working his way back from a strained left hamstring, but Landale has been the best offseason acquisition.

Building up stamina, then what?

Williams wanted to get the minutes of his key players close to what they’d be in the regular season during training camp.

Felt he achieved that in Monday’s game at Denver as Paul, Booker, Ayton and Bridges each played between 27 and 29 minutes.

So Williams decided to rest those four Wednesday nights, but the Suns don’t play again until their season opener next week against Dallas at home.

“It’s just weird how everybody tries to mimick the condition and then you don’t play for a while,” he said. “We have to do it in practice. We’ll have at least one day when we come in and just play a game and then the other days we’re going to play a lot anyway. So we’ll do our best to keep all of our guys sharp and conditioned, but as far as game condition, every team is going to have five or six days, maybe seven, before they open up.”

“What a great experience and opportunity for them to play,” Williams said. “So that was the main reason why we signed those guys.”

Arms is a rookie out of Texas Tech who was in training camp with the Nuggets after playing for their summer league squad. Lee played for the Pistons last seaon.

Have an opinion on the current state of the Suns? Reach Suns Insider Duane Rankin at [email protected] or contact him at 480-787-1240. Follow him on Twitter at @DuaneRankin.