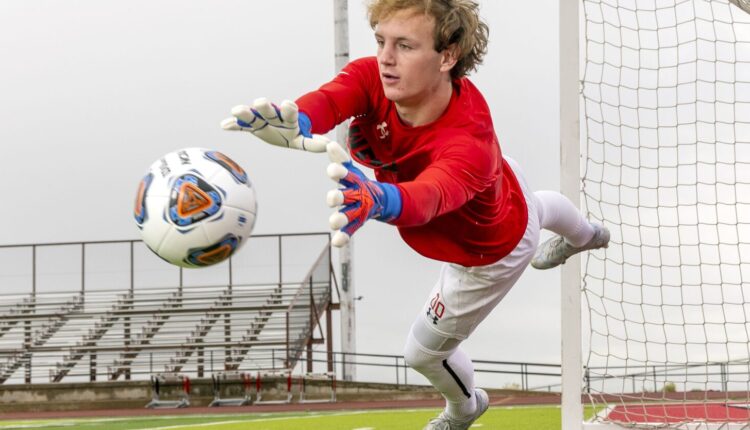 For the longest time, Stockton Short and his family weren’t really soccer people. Their focus — and his focus while growing up — was always on the football field and the basketball court when it came to athletics.

The Weber High goalkeeper said that he never really played seriously competitive soccer until his sophomore year of high school.

Standing at 6-foot-3 with superb athleticism, Short possesses all the intangibles that a great keeper needs. Realizing that soccer was the sport that he felt the greatest connection to, Short decided to make the sport his main priority and set a goal to become the best goalie he could.

Championships at the regional and state level, broken records and the 2022 Deseret News Mr. Soccer award.

“Getting a Mr. Soccer award or any Mr. ‘athlete’ award is something that young athletes dream about their whole life,” Short said. “It means a lot to me and I hope it’s a motivation to other goalkeepers out there that they can win the award if they perform and give it their all.”

Weber head coach Gavin Flitton said he was initially surprised when he was notified that Short would be receiving the award, not only because it had never gone to a goalie, but also because the Warriors’ playoff run came up short this year. Flitton, however, said that the more he thought about it, the more he realized that Short the obvious choice.

In two years starting in goal, Short averaged just 0.3 goals conceded per game and recorded a shutout in 25 of his appearances (tied for third most in state history). Short conceded one or less goals in 35 of his 36 career games (97%).

With Short covering the goal, the Warriors set a state record last season with only three goals conceded in 19 games, and Short himself set the single-season state record for most clean sheets in a season (16).

The Warriors went undefeated, winning the school’s third state title after a 6A championship game that saw Short make a title-clinching save in a penalty shootout.

Short followed up the historic season with a senior season that saw him record as many shutouts as goals conceded (9) — the lowest total in the 6A classification.

“I looked back at his season, and high school career, and I realized that no kid deserves this award more than Stockton,” Flitton said.

“What he did for the Weber High program and what he’s done for goalies in general in the state — there was no doubt in my mind that he should be the one getting (the award). … It makes you proud as a coach, but I can’t really take that much pride in it because it’s all him.”

In his first season as Weber’s head coach, Flitton said that when he started to work with the players, Short’s abilities became apparent immediately. Short displayed what Flitton called “incredible athleticism” as he showcased his ability to read and react to opposing attacks, which, of course, translated into real games.

But Flitton said that it was the senior goalkeeper’s coachability that made the most significant impression on him. Flitton said he challenged Shortly to get better with the ball at his feet, and by the end of the season he was routinely making plays with the ball.

Short was quick to acknowledge that he’s been blessed with an ideal frame and skill set to thrive as a goalie, but considering that he came onto the soccer scene as late as he did, Short said he had to put in continuous training work in order to play at the level he is at today.

“Being a keeper isn’t easy and being fundamentally sound and consistent is a challenge,” Short said.

“Consistency is the top priority of a goalkeeper, because what’s the point of playing really well one game if you make three mistakes the next game? So my hard work and training really helped smooth out my play and allow me to play at the level I did. … Hard work will beat talent any day.”

Flitton — who didn’t have a goalkeeper coach on his staff — said Short’s commitment to improvement showed at practices, where Short essentially acted as the Warriors’ goalkeeper coach, leading his keeper teammates through drills while the rest of the team and coaches focused on outfield training.

Though Short committed himself to developing on the soccer pitch, he kept himself busy during the offseason by making himself into a three-sport athlete for the Warriors.

The senior was a starting receiver on Weber’s 10-win football team, where he recorded 711 yards (second most on the team despite it being his first year of high school football) on 40 catches, before going on to secure a key role on the school’s basketball team.

Short said that his participation in both football and basketball undoubtedly paved the way for him to improve and thrive as a goalkeeper.

Although he performed exceptionally well in goal for two years, Short was quick to emphasize that he wouldn’t be receiving the award if not for the outstanding defensive play he received from his teammates throughout his high school career, saying that there were a handful of games where he had to do “the bare minimum” and only touch the ball a few times.

But game in and game out, Short was always there backing-up his defenses when they needed him the most — with last season’s 6A championship game being the foremost example.

“Utah has some great high school soccer players, don’t get me wrong, but he had a career that’s unheard of, and the fact that it is unheard of and stands out so much just shows that he does deserve to be Mr. Soccer ,” Flitton said.

Short will continue his soccer career on a full-ride scholarship at Utah Tech, and even though he has plenty of games ahead of him, the record-breaking goalkeeper has already earned himself quite the legacy in the Beehive State.