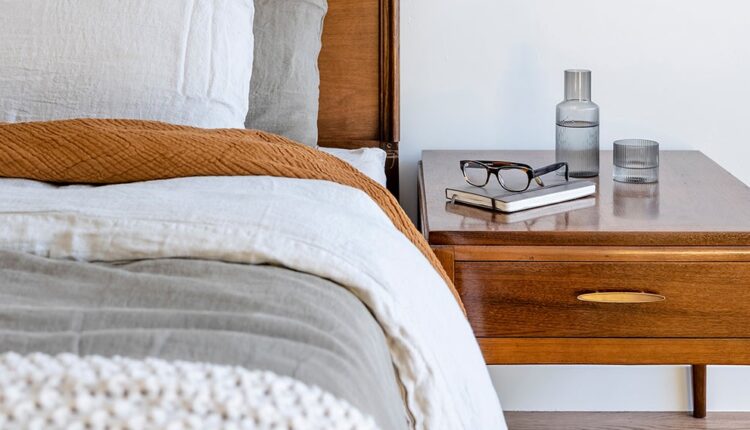 Megan Lim and her husband, Chris, chose the smallest house on their block because of the block itself. “They call it urban suburbia,” says Megan. The neighborhood the couple and their then 4-month-old daughter, Juniper, moved into back in October 2019 is close to all the action in downtown Sacramento, California, but it also has that quintessential neighborhood feel. “There’s a mom’s group on social media, and I picked up free diapers the other day. People are always giving away toys; it’s just very family friendly,” Megan adds. So even though the 920-square-foot house was by no means their dream home, can you blame them?

It didn’t take long before the couple realized they were outgrowing the space (and this is even before they welcomed their second child, Phoebe, this past February). Not wanting to leave their beloved neighborhood, they tasked Christina Valencia and Kele Dobrinski, the wife-and-husband designers behind local firm Colossus Mfg. and hosts of HGTV’s Mash-Up Our Home, with bringing the house up to par with the rest of the street. But first the duo had to navigate their clients’ very different interior styles. 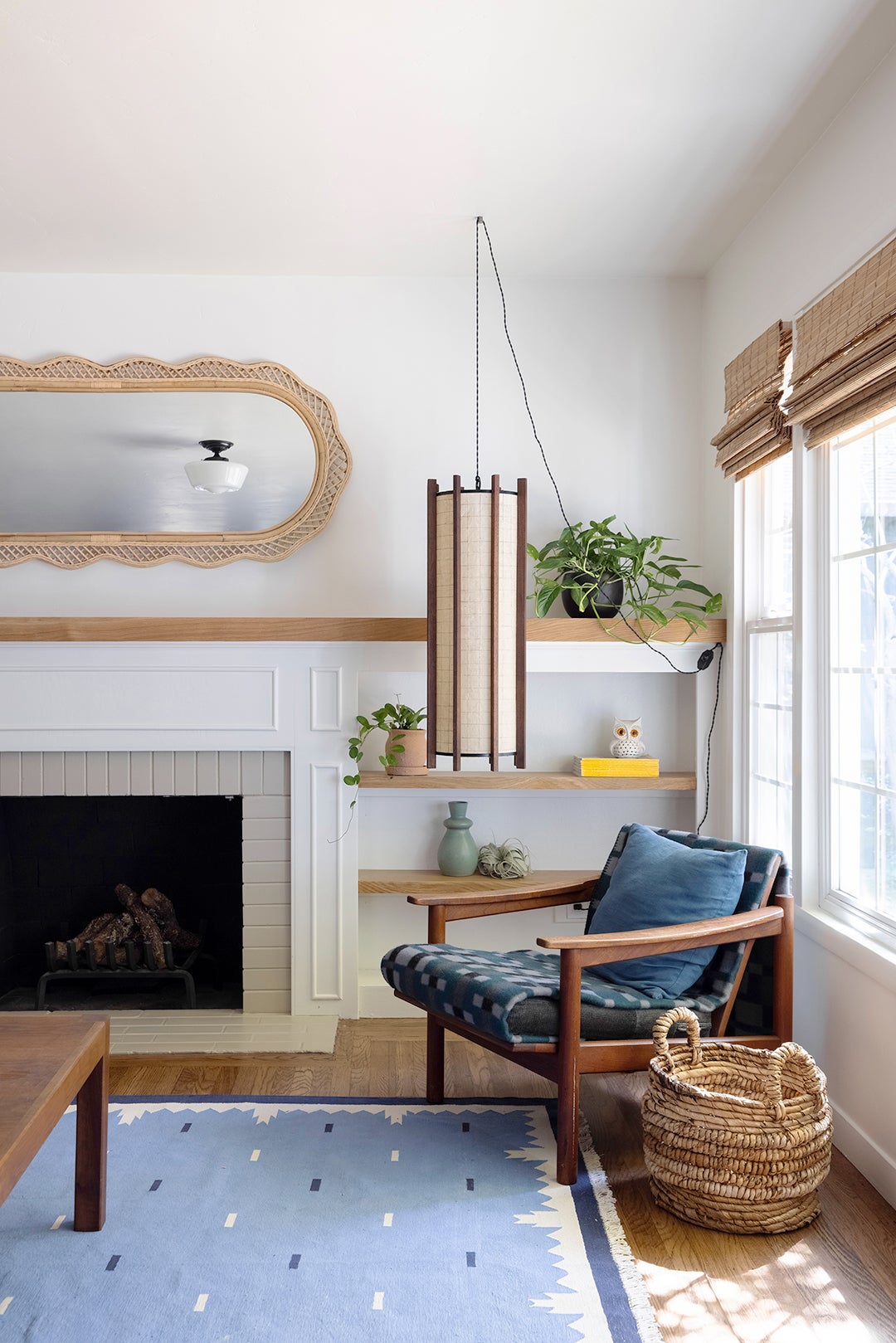 “I think my husband thinks my design style is messy and cluttered—I like to say organized chaos,” says Megan with a laugh. She is an editor at a local lifestyle magazine and very much a lover of colorful tchotchkes; Chris, an elementary school teacher, prefers a streamlined space with little embellishment. “When we get home from the grocery store, he’ll go and reorganize everything [in the refrigerator],” shares Megan. “And he’s really good at it.”

At this point, Dobrinski and Valencia have become pros at helping couples with different aesthetics strike a balance. “It’s a lot of getting down to the root of what they’re looking for and how they want to live,” Valencia explains. And it’s not that hard to figure out because after all, “there’s a reason they live together in the first place.” The couple’s bedroom is the perfect example of how to find harmony. 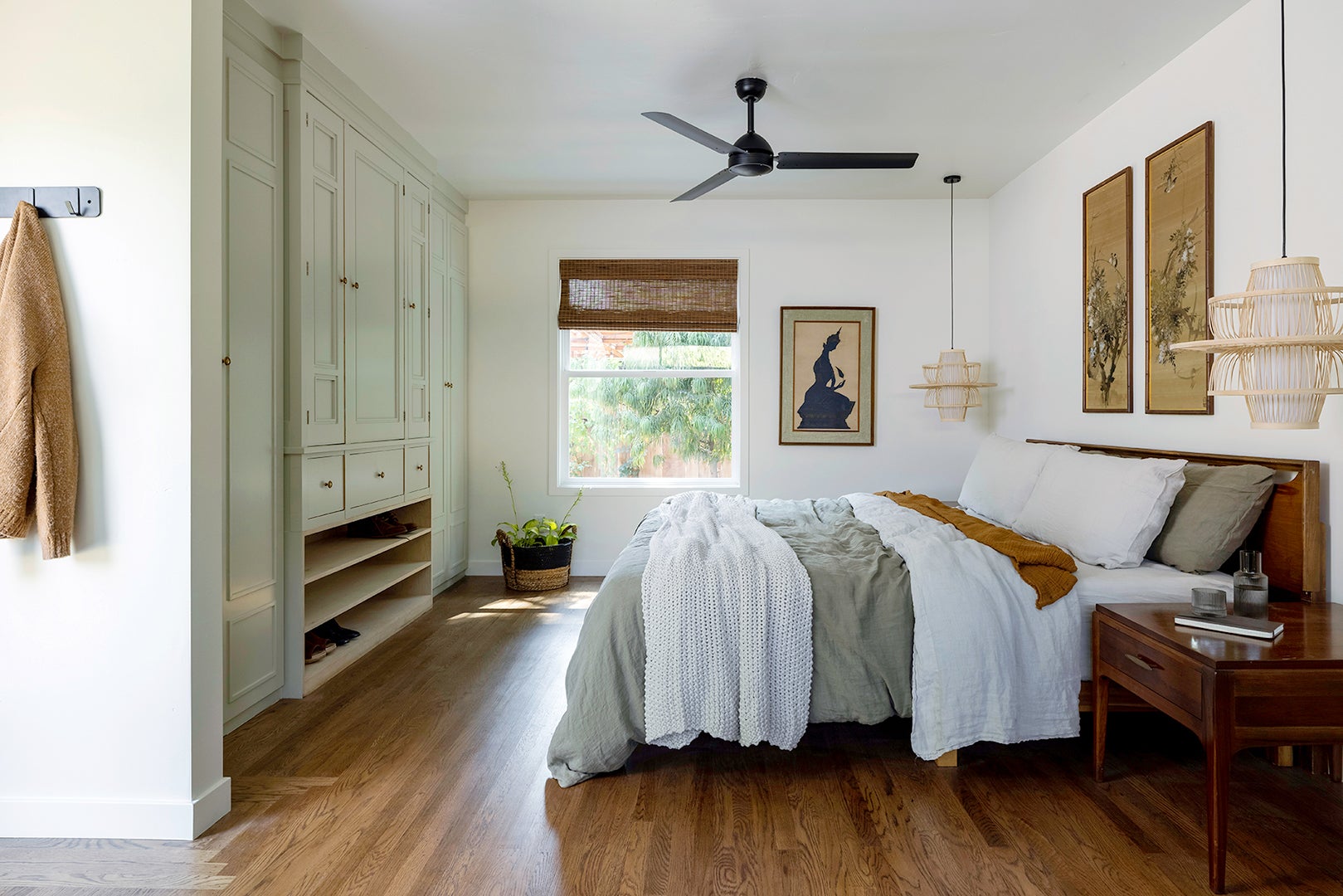 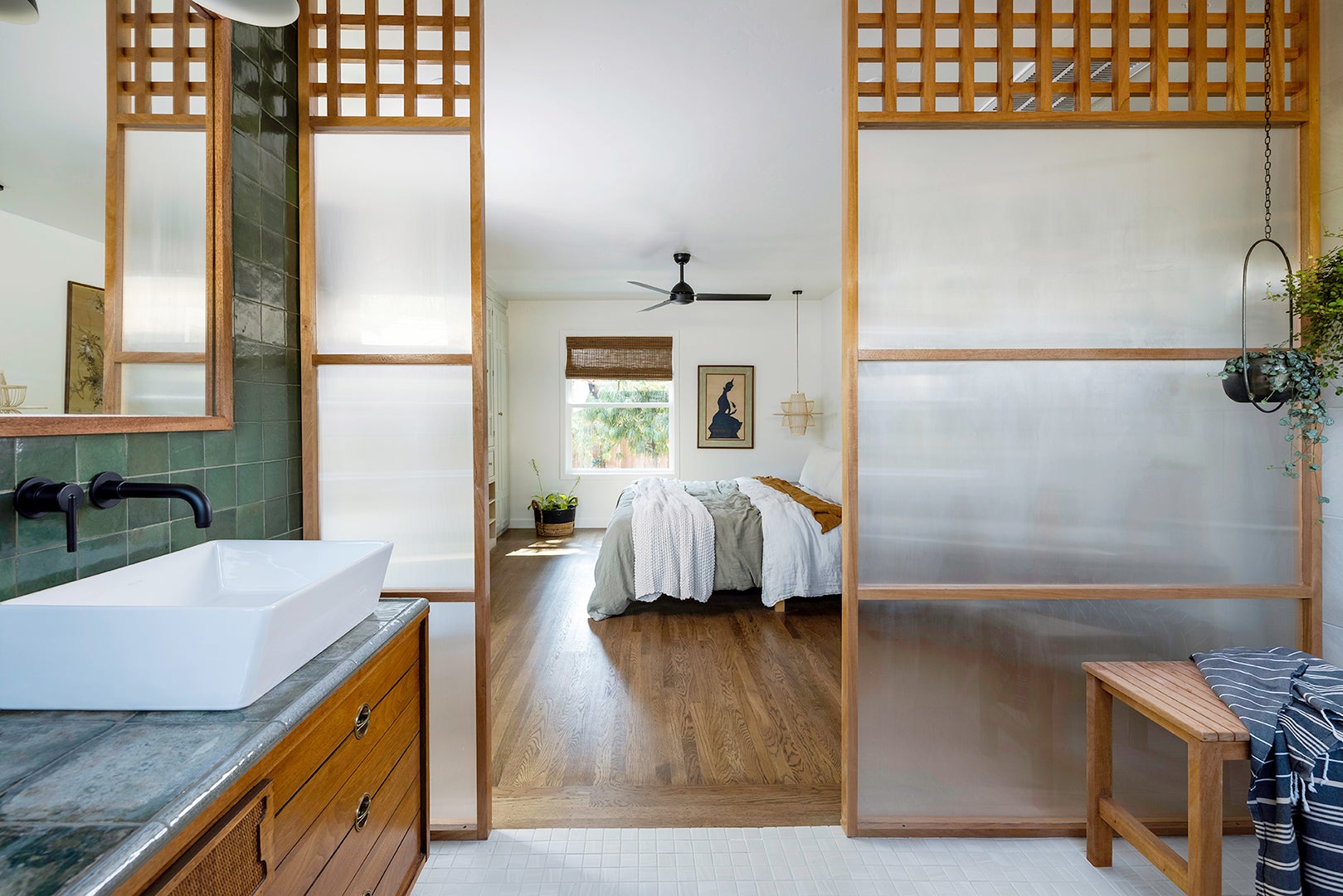 The jumping-off point for the brand-new 320-square-foot addition (they took up part of the backyard to carve out the room) was to make it feel like a nice boutique hotel suite, hence the open-concept shower-vanity area. Never fear: The toilet is in a separate closed-off spot. “We’re super-open in our relationship just generally; we’re not very private, so it works for us,” explains Megan. 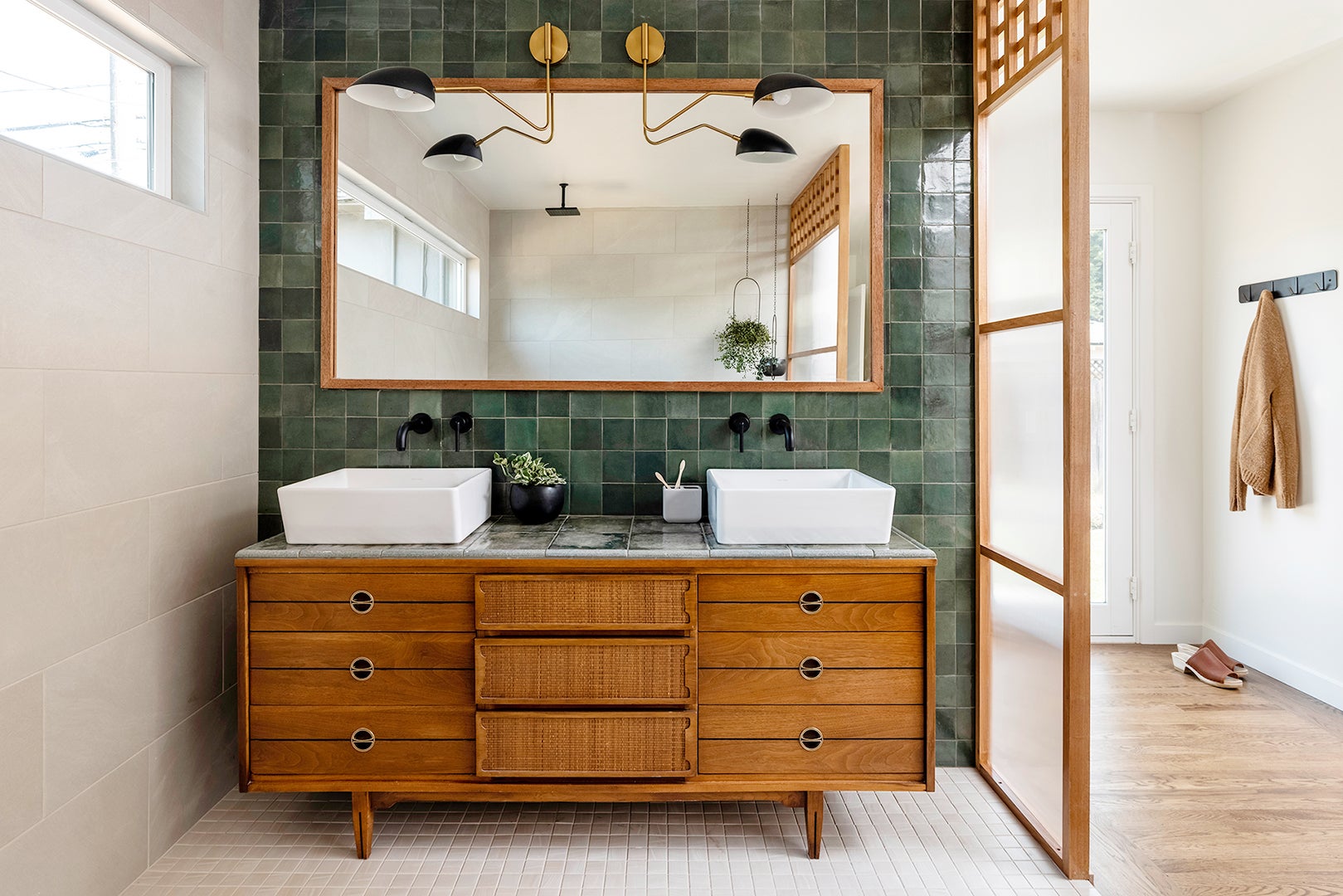 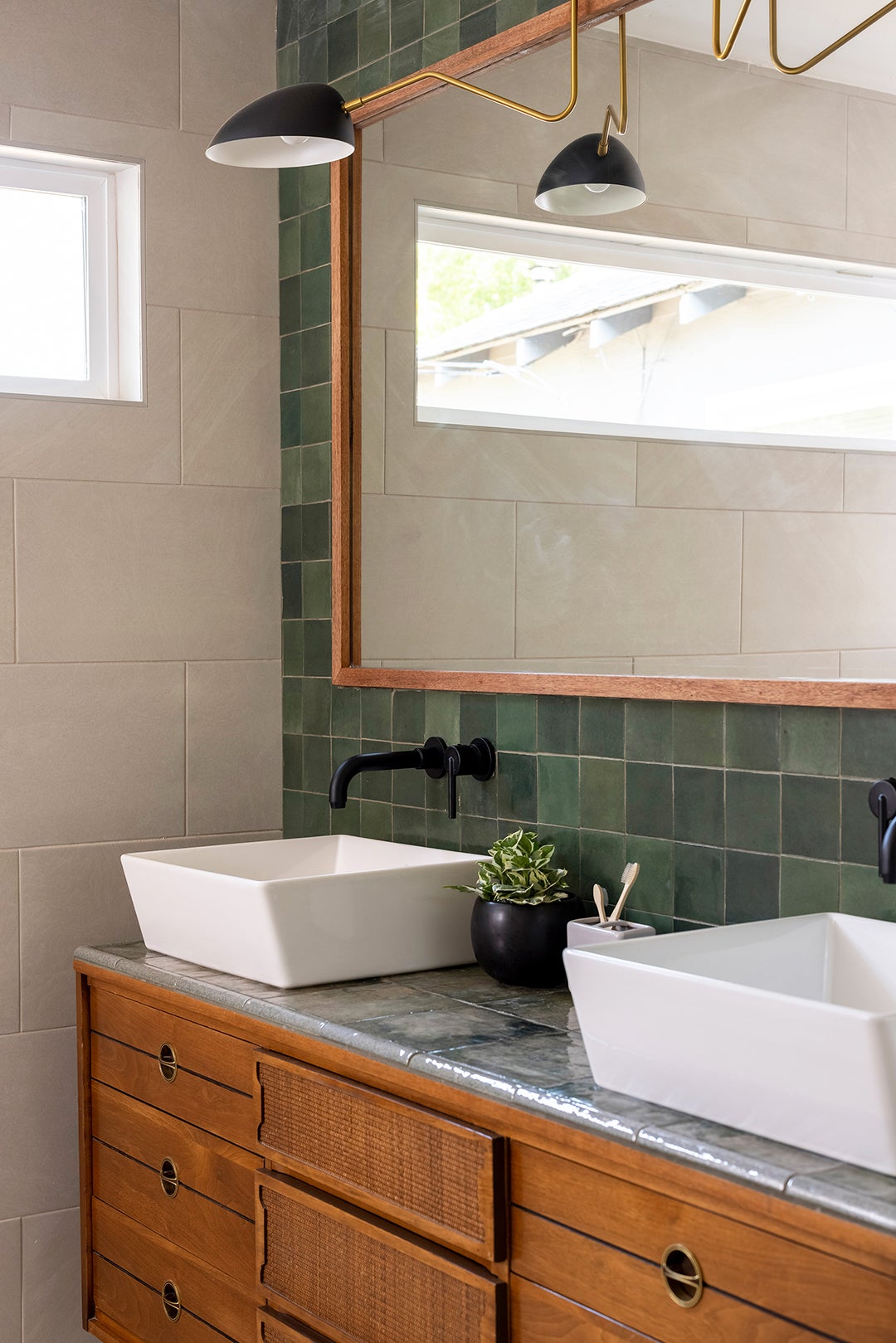 The sleek partitions that partially block the area from view feature opaque fluted acrylic panels as opposed to glass, which Dobrinski feared might become damaged if the wood framing were to move around due to the moisture in the room. The designers opted for mahogany as an extra precaution because of just that: it’s often used as decking, so they knew it would be able to stand up to water and humidity. The old dresser-turned-double vanity adds a storied element to the space. They reimagined the furniture by topping it with a tiled countertop and sinks and trimming some of the interior drawers to make way for the plumbing. 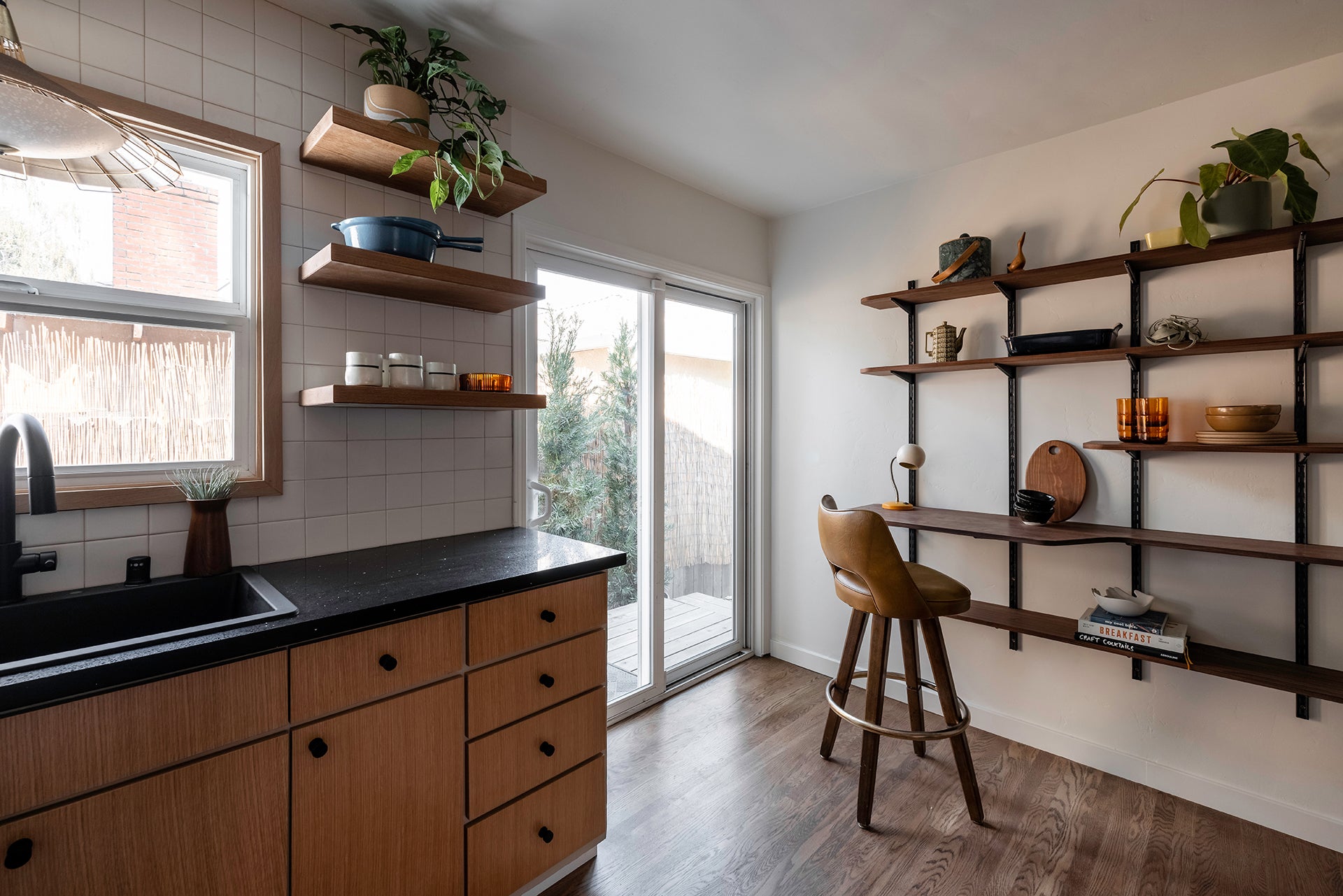 Tackling on a whole new section of the house was no small expense, so Valencia and Dobrinski had to get scrappy in the kitchen. “This is by far the most budget-efficient kitchen remodel we’ve ever done,” attests Dobrinski. By sticking with the existing galley’s cabinet boxes and just replacing the doors with white oak fronts, they gave the space a clean look (yes, even the countertops stayed the same). 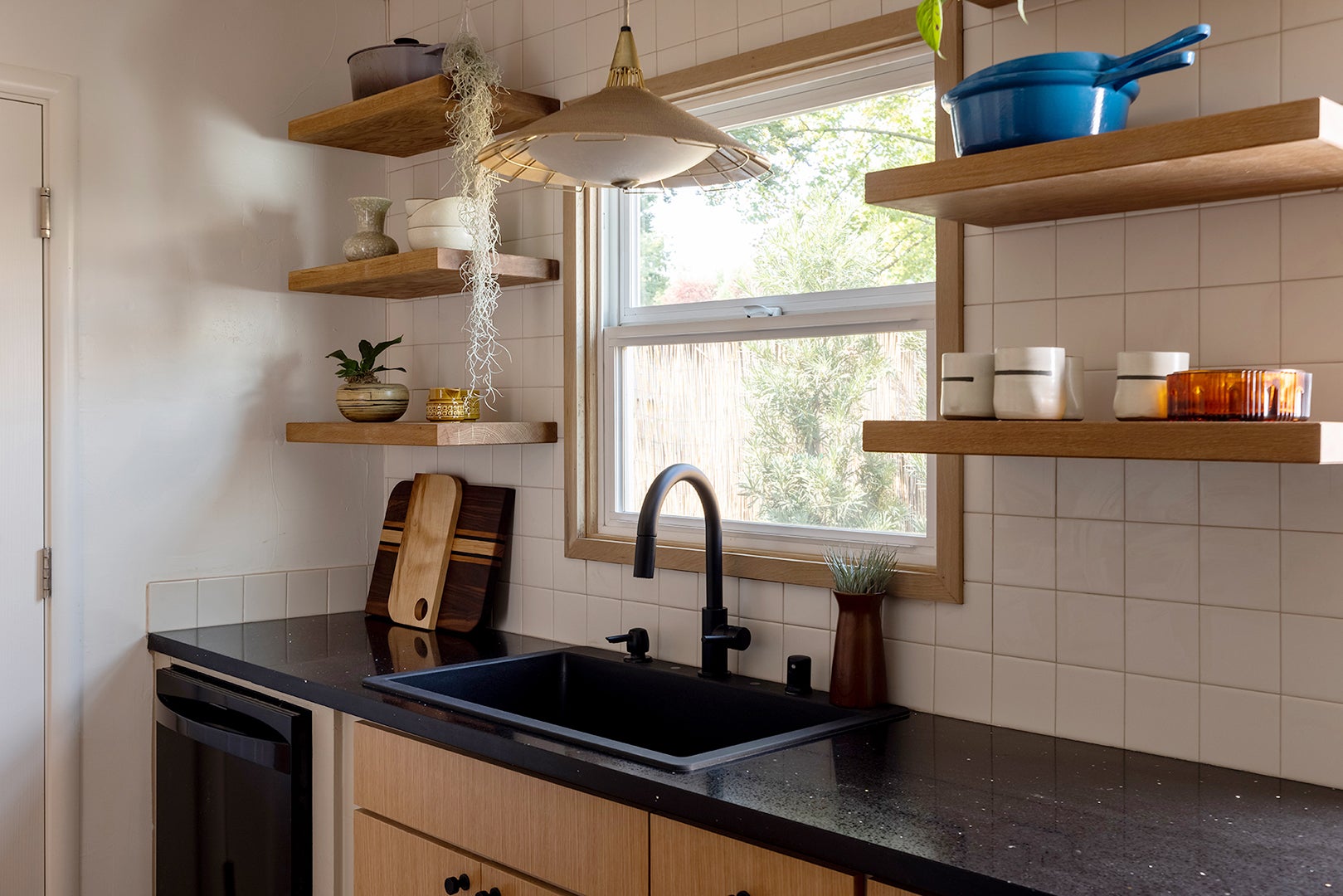 Since the main cooking area is out of view from the living area around the corner, the designers custom-designed a shelving unit with a flip-down countertop–slash–breakfast bar. The spot has become a favorite for Megan during her recent maternity leave. “I’ll sit there on my laptop or open mail, and I can see Juniper playing in the living room,” she says. 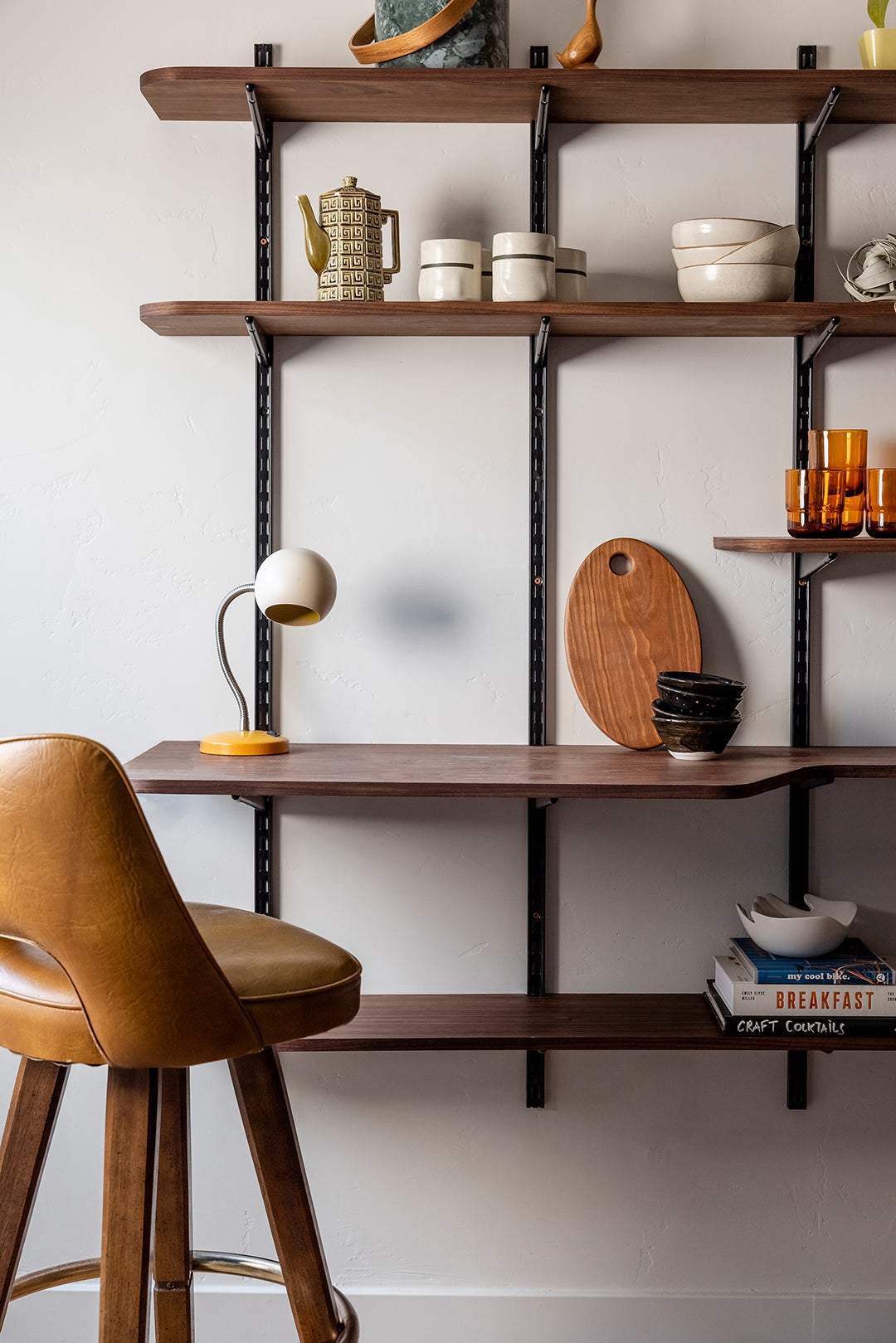 While the living area looks like it’s just intended for conversation, there is a TV hiding out behind the colorful wall tapestry, so if ever Juniper needs to be occupied by Peppa Pig, they can just roll it up. Even in the primary bedroom, the Lims placed a small television in the center of their built-in wardrobe, “that way all the media stuff isn’t in your face,” says Megan. 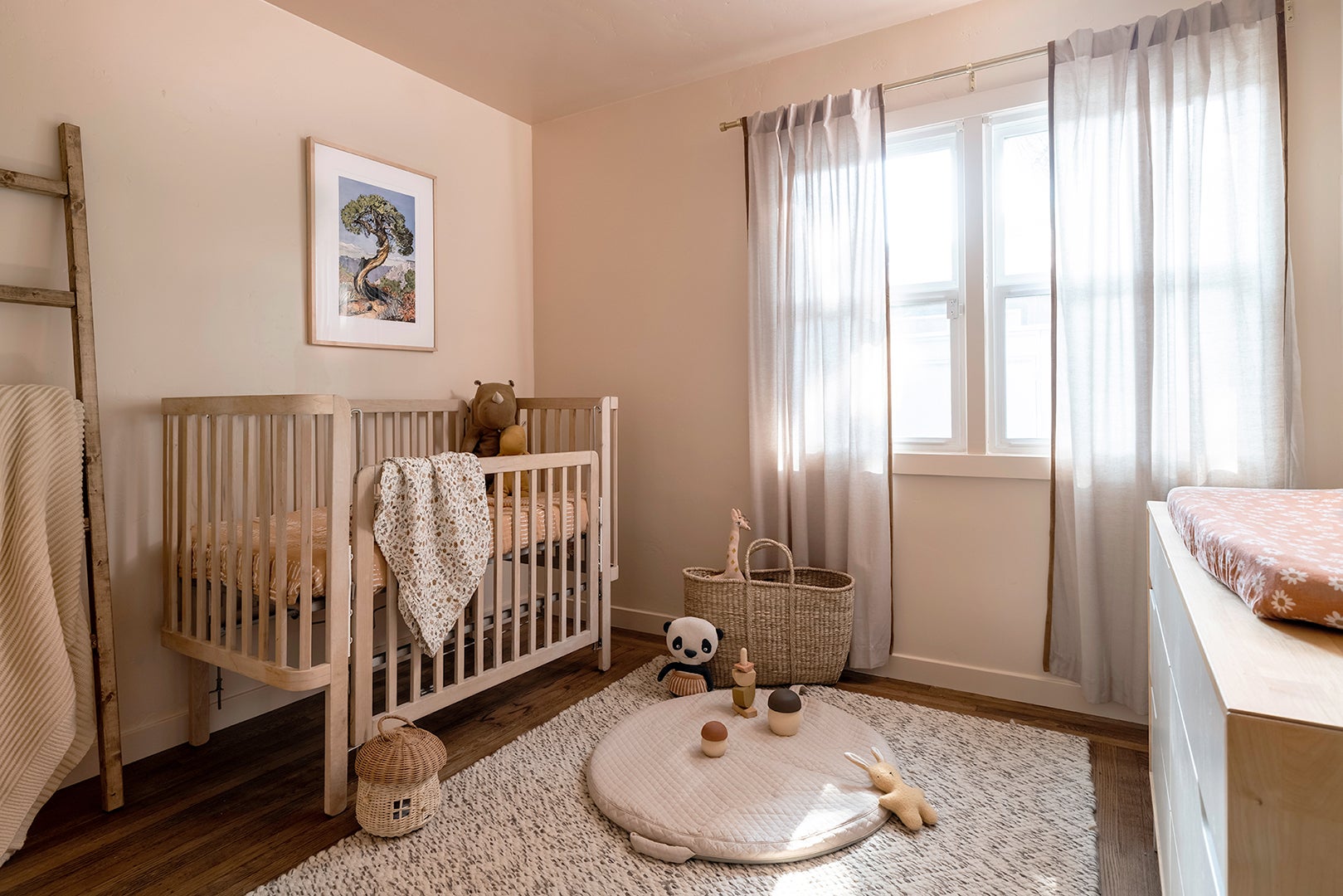 It was halfway through the renovation when the Lims learned they were expecting their second little one, so adding a nursery last minute, filled with essentials from local store Bitte, was a must. The crib at the core of the soft blush pink space? “That’s actually mine from when I was a baby,” Dobrinski points out. The designers had snagged it from his parents, stripped it down, and used it for their own children—and now it gets a third life at the Lims’ house. It’s the neighborly thing to do.

Go to local vintage shop: Nicole, the owner of The Den, has a great eye, and the shop is filled with fun and funky treasures. —Valencia

Object in my home that gets the most use: Our pour-over coffee maker (we have a toddler and infant in the house, sooo…). — Megan

Biggest splurge(s): Adding the en suite, followed by hardwood flooring throughout the house, a quality mattress and sheets, and recessed lighting in our kitchen and living room. — Megan

Where we buy plants: Indoor plants really help breathe life into a home and finish off a space, so we turned to Propagate Plants to infuse the Lims’ home with lots of greenery. —Valencia

Best save: Most of our decor including knickknacks, lamps, and glassware are family heirlooms or were purchased secondhand. We love a good thrift store find! — Megan

Other highly recommended craftspeople we worked with: We love working with Block and Bowl on woodworking projects. Thomas can really make anything we dream up for him. For some of our more intricate projects that involve machine-based or laser-cut woodworking, Julian Sandpaper has been an awesome partner. —Valencia