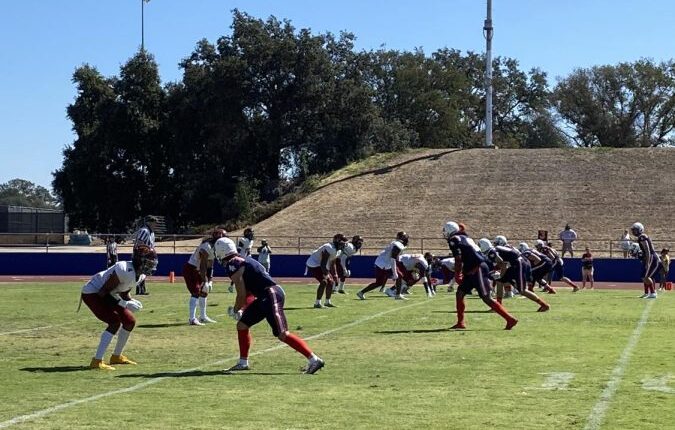 Beavers bring home the first win of the season, with the final score of 13-15

American River College’s football team is back on the field. The team played its first game of the season at home against Sacramento City College on Sept. 3.

The ARC football team brought home the win, with a final score of 13-15.

“We got it! We got away with the win and it’s a great day to be a Beaver,” said Jon Osterhout, ARC’s head coach.

The defensive line played a fundamental role during the game. Its performance was a standoff for most of the game. They forced a fumble on third down. ARC’s defense held SCC to minimal first downs to allow excellent field position for the offense.

Robert Freeman returned a 40-yard punt during the first quarter, the ARC team was leading 0-3, thanks to a field goal by Zach Schreiner.

During the second quarter, SCC led with a touchdown making the score 7-3.

“The team had some adversity during this game,” Osterhout said. “We didn’t play real clean football and we were inefficient on the offensive side of the football.”

Osterhout also said that for the team this is just a reason to work harder and go back to the drawing board.

The players were thrilled by the win, however, they said they knew that there were things that didn’t work out.

“It feels good to get the ‘W’, but we did not play our best game at all,” said Avant Jacobs, running back for ARC. “Throughout the week, we had a good game preparation, but we didn’t execute it to the best of our ability.”

The offensive line had few tries to move forward. After several attempts, during the second quarter, they scored a touchdown. Thanks to a completed pass from Carlisle and an amazing catch by Grayson Barnes, ARC’s tight end.

At this point, ARC was leading 7-10. However this lead didn’t last long, in fact, SCC scored another touchdown. They gained possession inside the red zone.

In the third quarter, ARC got a safety.

During one of the last plays, Carlisle threw a long pass to Ian Simpson that gave them a chance to hit a 50-yard field goal by Schreiner.

This was the play that led ARC to its first win of the season.

As the Beavers were taking the field they could be heard chanting the team’s mantra, “I got your back!”.

“We’re striving to help each individual create the best version of themselves possible,” Osterhout said. “Get them to play the game the correct way within the confines of what we asked them, and usually the outcome results [in] favor [of] American River College.”

The players are aware of what they need to work on and improve for the next game.

“For the next game, I think we have to dive more in the huddle, knowing exactly what we are doing,” Jacobs said. “And becoming a little bit more focused, I feel that can change a lot.”

The team’s next game is away against Fresno City College on Sept. 17 at 5 pm