Arrest made while suspect was ‘hunting’ 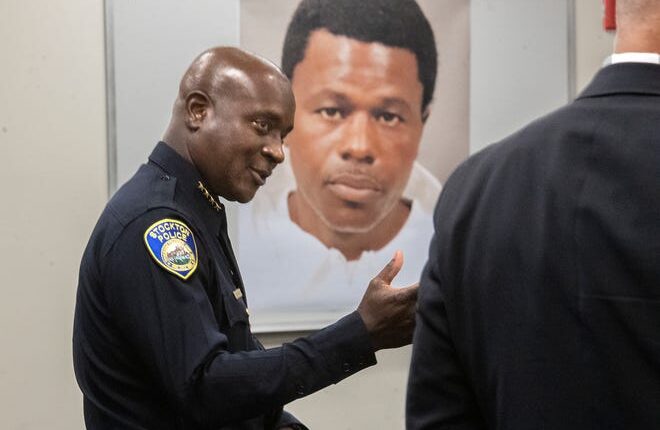 STOCKTON, Calif. – An arrest has been made in the serial killings in central California, police said Saturday, providing relief for a community living in anxiety as a gunman continued to kill for more than a year.

Stockton police said they received tips from the community that led them to the suspect, Wesley Brownlee, 43. Investigators were monitoring Brownlee’s movements and followed him as he was driving around 2 on Saturday. They “determined early this morning he was on a mission to kill. He was out hunting,” Stockton Police Chief Stanley McFadden said at a press briefing Saturday afternoon.

“We are sure we stopped another killing,” McFadden said, adding the suspect was wearing dark clothing, a mask and was armed with a handgun.

Police have linked seven shootings, six of which were fatal, to the case using ballistics and video evidence. The attacks stemmed back to last year.

In April 2021, a man was fatally shot in Oakland. Days later, a 46-year-old woman was wounded in a shooting at Stockton. Then, more than a year later, more shooting deaths were reported. Five killings in Stockton were linked to the case, happening between July 8 and Sept. 27 — all happening within a few miles of each other.

The six fatal victims were all men; one woman was also shot and survived, a key witness for authorities as they probed the case. Several of the victims were homeless.

The suspect was captured on video at multiple crime scenes but authorities were mystified without any leads or suspects, causing local leaders to implore residents to be vigilant and avoid being outside alone late at night.

McFadden said Saturday that investigators were aided by residents who provided tips and “old-fashioned police work.” After tipsters provided a person of interest, officers started monitoring the suspect at his home. Early Saturday morning, police followed him as he left in a vehicle. His behavior appeared similar to what investigators determined was a “pattern” before his previous killings, McFadden said.

The suspect was driving “around parks, around dark places, stopping, looking around, moving again,” McFadden said.

Authorities said the suspect has a previous criminal record but did not elaborate. He was scheduled to be arranged early next week, when charges will be announced, San Joaquin County District Attorney Tori Verber Salazar said.

Authorities did not provide a motive in the slayings Saturday.

Communities where the killings happened have been living in fear while officials investigated the string of murders. Stockton police went door-to-door and canvassed homeless encampments to warn residents to take precautions, such as traveling with others and staying indoors when possible.

The first fatal victim believed to be linked, Juan Vasquez Serrano, 39, was shot multiple times in Oakland at about 4:15 am on April 10, 2021.

The woman who was shot and survived said she was in her tent on April 16, 2021 when in the middle of the night after 3 am, she heard someone walking around outside. When she came out of the tent, she was met with someone holding a gun, who said she fired several shots, wounding her.

When she advanced toward her attacker, who was wearing dark clothes, a hood and a protective face mask, the suspect lowered the gun.

“She said there were no words mentioned at all,” McFadden said last week.

None of the victims were robbed or beaten before they were shot, and police said they didn’t seem to know each other. The attacks appeared to be ambushes, McFadden said.

While five of the seven men killed were Latino, McFadden has said the killings don’t appear to be hate crimes.