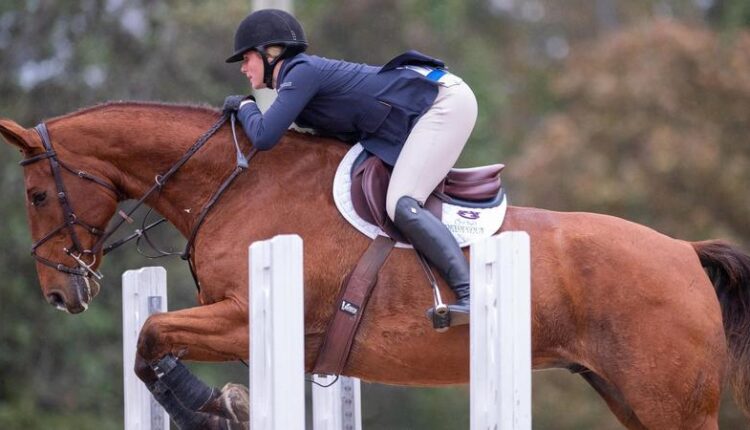 Fresno, Calif. – The No. 5 Auburn equestrian team closed out its California trip with a 16-2 victory at No. 9 Fresno State Saturday afternoon. The win moved the Tigers to 2-1 on the year.

“The team rode great both days on this trip,” head coach Greg Williams said. “When the scores don’t go your way, it’s easy to get discouraged or doubt your abilities. This team did none of that and came out just as hard today. Coach Jessica Braswell and Coach Taylor Searles continue to keep pushing this team to achieve higher goals.”

Auburn took three of four possible Most Outstanding Performer awards on the day. Junior Ellie Ferrigno was named MOP in Fences, while sophomore Mary-Grace Segars won Flat. Freshman Alexia Tordoff added another MOP award to her list on the year, winning the honor in Reining.

The Tigers came out of the gate ready and took a 9-1 lead after Fences and Horsemanship.

Auburn first swept the Bulldogs in Fences, 5-0-0. Ferrigno started off with an 83-76 MOP victory vs Ana Bertozzi. Sophomore Sophee Steckbeck scored 73 points in her win, while classmate Segars defeated her opponent, 78-73. Senior Ava Stearns earned an 81 to best her opponent by 13 points before fifth year Emma Kurtz edged Sara Tuck, 75-72.

Horsemanship finished 4-1-0 vs. Fresno State to help the Tigers gain a big lead heading into the break. Junior Madison Parduhn had the slight advantage over her opponent, 72.5-72. The Bulldogs took the next point, but senior Olivia Tordoff followed with another 72.5-72 victory for her first of the season. Freshman Caroline Fredenburg scored 74.5 points in her win, while senior Maddie Spak improved to 3-0-0 with a 74.5-72.5 victory.

Following the intermission, Reining went 4-0-1 against the Bulldogs. Senior Boo Kammerer led off with a 65-64.5 win before Tordoff put together her MOP ride, 69-67. Freshman Caroline Buchanan tied her opponent, 67-67, before junior Isabella Tesmer’s 66.5 was good for a win. Junior Kate Buchanan concluded the event with a 66-65.5 win over Shelby Robinette.

Flat closed out the day with a 3-1-1 mark vs. Fresno State. Ferrigno kicked things off with a 72-72 tie and Steckbeck followed with a seven-point win, 70-63. Segar’s MOP ride gave her a 78 and a five-point victory. Kurtz finished things off with a 70-68 edge over Bertozzi.

The Tigers kick off their home slate next weekend, hosting UT Martin on Oct. 22. The two teams will face off at 11 am CT at the Auburn University Equestrian Center.

Arrest made while suspect was ‘hunting’