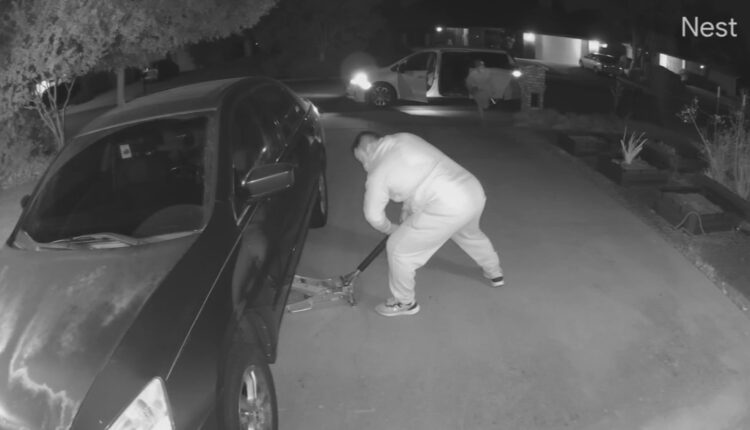 FRESNO, Calif. (KFSN) — Authorities are asking for the public’s help tracking down these suspects captured in the early morning of October 22 in northeast Fresno.

“He sees two guys walking to his driveway, one immediately takes a jack, starts lifting up his car, his buddy comes through with a drill, climbs underneath,” Fresno County Sheriff’s Office’s Tony Botti says.

The two men in the video are seen leaving, but the crooks were not done just yet, they returned about an hour later in their white minivan to finish the job… and they didn’t seem to care how loud they got in the process.

“Climbed underneath, sawed that catalytic converter off in about two minutes, then they were gone,” Botti says.

Mechanics say, if yours is stolen, you’ll know it.

“It will sound like, when you were a little kid and you had your bicycle, the baseball card in the bicycle spokes, a loud fluttering sound,” A1 Auto Electric service manager, Darryl Hosepain says.

This week, the Department of Justice performed a series of raids in a multi-million dollar catalytic converter theft ring.

“We’ve also identified 10s of 1000s of catalytic converters that have been taken as well, it’s a larger problem than we initially thought,” FBI special agent Justin H. Change says.

At least 21 people across five states were indicted in what authorities say was a more than half-a-billion-dollar scheme.

The FBI says, all the stolen parts ended up at a DG Auto Parts in New Jersey.

According to court documents, some of those catalytic converters were taken in California.

For the victims, the replacement cost is not the only problem.

To combat the problem, two laws will go into effect on January 1 limiting who may sell and purchase catalytic converters by verifying vehicle parts.

“Thieves, if they want your cat they’re going to get your cat, they’re going to find someone to take that for the precious metals that are inside the catalytic converter, so I don’t see that as being much of a deterrent,” Hosepain says.

“Trump True Believers” make up around 15% of US voters