“Trump True Believers” make up around 15% of US voters 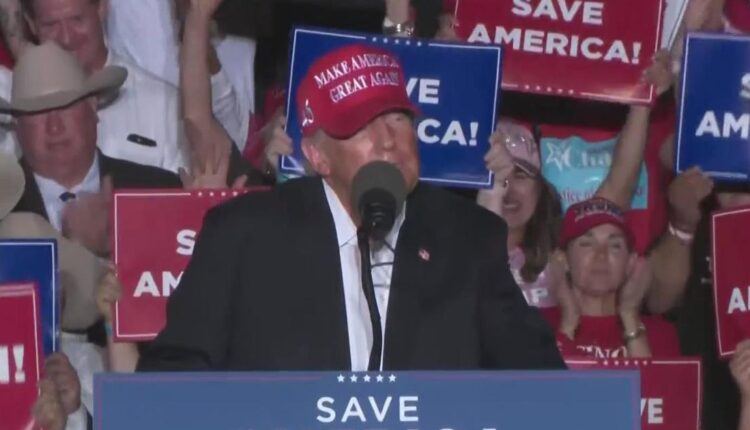 SACRAMENTO — Former President Donald Trump’s influence is being felt up and down the ballot in midterm races across the country and here at home.

His group of followers identified by CBS News as “Trump True Believers” make up about 15 percent of US voters.

His name isn’t on any ballot, but the former president is testing his political muscle, in part by the candidates he’s endorsing in the midterms.

“I think we need a check, someone who’s going to sort of reign things in,” said Placer County Assemblyman Kevin Kiley.

Kiley is among three area Republicans backed by Trump. While he wouldn’t speak specifically to his presidential nod, he does think Republicans have an edge with voters who are looking for change.

“We have a super majority in Sacramento right now,” Kile said. “We have one-party rule in Washington, DC, and it hasn’t worked out well.”

Incumbent Congressmen Doug LaMalfa and Tom McClintock have Trump’s support, too, according to ballotpedia.org. Both have questioned the results of the 2020 election — a position experts say carries significant sway.

“They don’t care about the specifics. They just believe Biden shouldn’t be president,” said UC Davis Communications Professor Magdalena Wojcieszak. “They see the Democratic Party and the Democrats as an enemy, not a political opponent.”

Wojcieszak said these Trump True Believers are a block of voters who are mostly white, “MAGA Republicans” and live in rural areas. She said they’re a potent force in the GOP that could swing the election.

“I don’t think it’s overblown at all that election deniers are a threat to democracy,” said Kathryn Olmsted, a UC Davis history professor.

Olmsted is a history professor who studies conspiracy theories. She says the former president’s grip on these voters centers around a sense of community and collective power.

“They see themselves as rebels, as freedom fighters, who are mobilizing each other and supporting each other against the ruling elite,” Olmsted said. “That’s tremendously attractive ideology because it makes people feel important.”

And that feeling has fed some fierce rhetoric away from mainstream media and across social media platforms, fueling debate on other divisive topics, they feel, are part of a liberal agenda.

“The true believers think there is this conspiracy directed against them by a liberal elite to force them to accept LGBTQ rights,” Olmsted said. “And force them to allow abortions in their state.”

Whether Trump’s appeal will pave the way for a 2024 presidential run is still unclear, but experts believe Trumpism is here to stay — at least for a while.

“Many historians believe that we’re living through an unprecedented era, and historians don’t like to say that,” Olmsted said.

The latest CBS News tracker poll shows Republicans have a slight edge in taking back the House. The Senate is still a tossup.

Fresno Unified expands winter break camps for up to 10,000 students