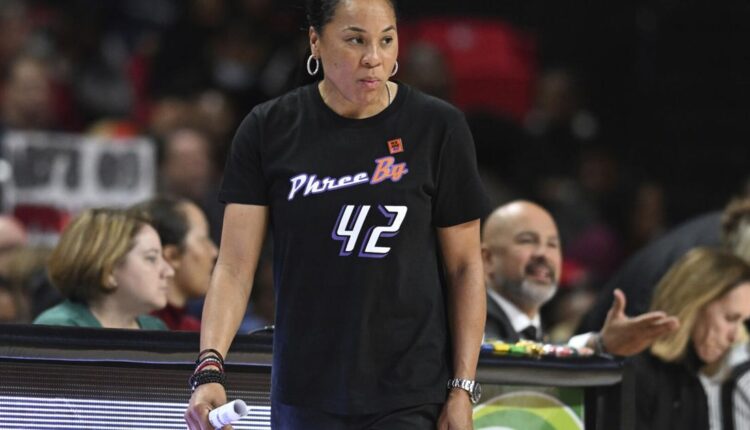 Shortly after the Indiana Fever won the WNBA draft lottery — with Boston expected to be the No. 1 pick — the South Carolina star led her team to a fairly routine victory in its first real test of the season. The defending champions held off a gritty Maryland team that was playing without its own potential lottery pick. Diamond Miller was out with a right knee injury.

Abby Meyers scored 21 points to lead Maryland (1-1), but aside from her ability to score from the midrange and beyond the arc, the undersized Terrapins had a tough time offensively. Perhaps no stat summed up this game better than the Gamecocks’ 11-0 advantage in blocked shots.

STOCKTON, Calif. (AP) —- Kiki Iriafen had game-high totals of 15 points and eight rebounds, leading Stanford to a victory over Pacific.

Iriafen was one of three players who scored in double figures for Stanford, including Hannah Jump (14 points) and Ashten Prechtel (11).

Iriafen scored twice inside during a 14-0 run midway through the second quarter that allowed Stanford (3-0) to pull away, and the Cardinal added to their lead steadily the remainder of the game.

Pacific (1-1) put up more shots than Stanford in both the first and second quarters, but was limited to just 25% shooting from the field at halftime and just 23.6% overall. The Tigers were led by Liz Smith’s 13 points and six rebounds.

AUSTIN, Texas (AP) — Taylor Jones had 21 points and five blocks in her debut for Texas after transferring from Oregon State, and the Longhorns defeated Louisiana.

The Longhorns opened their season without their best player, point guard Rori Harmon, who wore a protective boot on her right foot. Texas released a statement before the game that gave no details on Harmon’s injury and said her status is day to day.

Indiana pulled away in the second quarter as UMass Lowell went nine-plus minutes without a field goal. The Hoosiers went on a 23-3 run during the drought and led 49-17 at halftime.

Lilly Meister had 10 points for Indiana (2-0), which plays No. 5 Tennessee on Monday. The Hoosiers finished with 34 points off 20 turnovers.

Cayla King, who had 33 points with a school record nine 3-pointers on opening night, and Kitley combined for eight points as the Hokies closed the half with a 9-2 run to open a 31-23 lead. Kitley had 12 points, but Virginia Tech (2-0) only shot 36%.

Bucknell stayed close by shooting 48% but only shot 35% in the second half.

NORMAN, Okla. (AP) — Madi Williams had 25 points, five rebounds and four assists and Oklahoma made 14 3-pointers in a victory over SMU.

Williams was 10 of 14 from the field, including 3 of 3 from distance, to reach 20-plus points for the 31st time in her career. Williams was one of six Sooners with at least two made 3-pointers.

The Tigers opened the season with a school-record 125 points in a 75-point win, the second-largest margin of victory in school history. They followed that up with a 70-point win, shooting 53% with a 59-30 rebounding advantage.

Frannie Hottinger scored 25 points and Mackenzie Kramer had 21 for Lehigh (0-2),

PRINCETON, NJ (AP) — Maddy Siegrist scored five of her 32 points after reentering the game with four fouls and Villanova closed on a 12-0 run to upend Princeton.

Siegrist was 12-of-17 shooting with three 3-pointers to pick up her 18th 30-point game and had 13 rebounds for her 39th double-double.

Villanova made 3 of 4 shots in the run plus 6 of 7 free throws while Princeton missed its last seven shots.

Cunningham had four 3-pointers and 18 points for Princeton (1-1).

Michigan scored the opening 12 points of the game and led 49-12 at halftime after forcing 20 turnovers and holding St. Francis to 5-of-21 shooting. The Wolverines finished the game with 19 steals, helping to score 46 points off turnovers.

Cameron Williams had 12 points and eight rebounds for Michigan (2-0), which hosts Western Michigan on Wednesday.