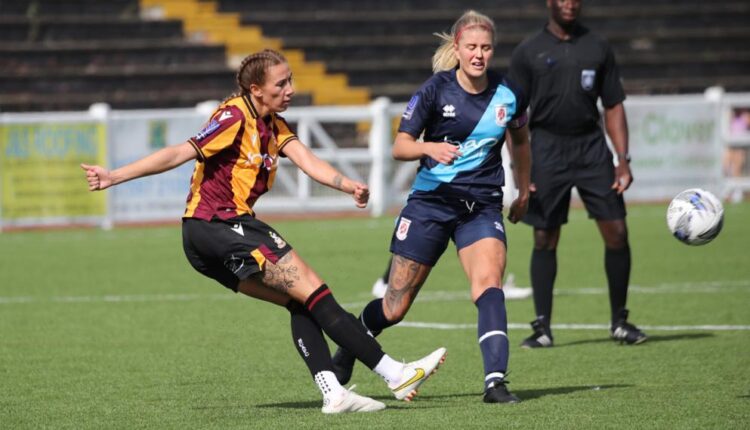 BRADFORD City AFC Women’s goal-winning heroine came in the unlikely form of their manager on Sunday – but she’s been doing it all season.

The Bantams traveled to just beyond Middlesbrough to face Norton & Stockton Ancients for a relegation-battle six-pointer.

They knew a win could take them off the foot of the Division One North table and leapfrog fellow strugglers Chorley, who were without a league fixture at the weekend.

And they did just that, with a 1-0 victory courtesy of defender, Charlotte Stuart.

Stuart has balanced orchestrating the team – having been appointed as first-team manager in August – and providing a potent outlet on the pitch as the side’s top-scorer with six goals.

That is half of City’s total haul for the season so far, highlighting its importance – and that was never more clear than in Stockton-on-Tees.

Bradford’s only win of the season before Sunday had come away from home, so there was some optimism they might be able to take something against a Norton & Stockton side who had amassed just five points at home so far.

There was little to write about in the first 15 minutes of the game just a few moments later the host’s keeper, Rachel Chisnall, had to make a save to deny an effort.

Norton & Stockton only managed their first shot on goal in the 27th minute, with a speculative volley from number 10, Bianca Owens.

The side’s entered half-time at 0-0 but it took less than 10 minutes into the second period for the deadlock to be broken.

The hosts had the first real effort of the half, in the 53rd minute, when Owens hit a free-kick and it came back of the keeper’s legs.

But there was nobody to tap in the rebound.

Just a minute later Norton & Stockton gave away the ball in City’s half and the visitors launched a devastating counter attack, which was finished off by Stuart.

There were then a flurry of chances for the home side, after a double substitution in the 61st minute – with Rachel Jackson and Laura Hockaday coming off for Estelle Clarke and Shannon Reed.

The latter made an impact in the 73rd minute, as she beat a defender on the right and crossed to the back post, but The Bantams defense stood firm to block a close range effort from Sophie Tierney.

Six minutes later, both Owens and Tierney went close but the visitors were at it again with some last ditch defending.

The final opportunity for Norton & Stockton happened in the 86th minute, but it came to nothing.

City held on for their second win of the season, with the three points taking them into 11th and leaving them just a single point off Merseyrail outside the relegation zone.

Northern Premier Division side, Brighouse Town, were also in action on Sunday, traveling away to face league leaders, Wolves.

They suffered a 2-0 defeat to the division’s top scorers.

Brighouse have now dropped into the relegation zone, after Boldmere St Michaels earned a 3-0 home win at AFC Fylde.

Sacramento could have a women-majority-led City Council