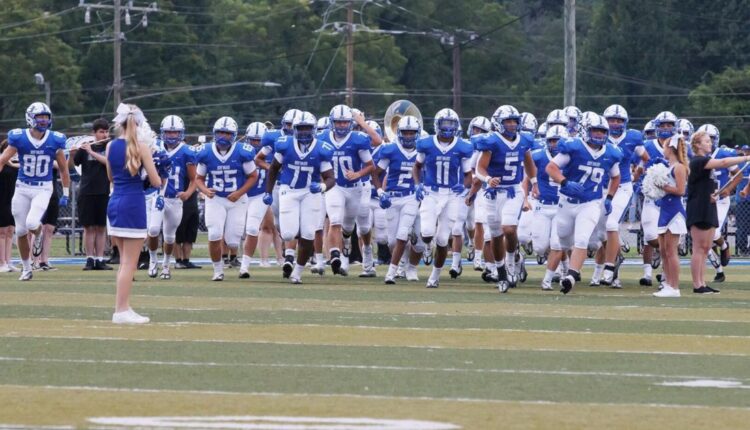 The Luke Coleman era of Brevard football got off to a rousing start with a Friday night 21 — 14 upset of longtime rival Pisgah Black Bears.

But it took a nerve wracking last-ditch red zone defensive stand — preceded by a gritty touchdown drive — to seal the game with a scant 10 seconds to go.

“Honestly, I knew we would win,” said an elated Coleman, who knew as much when he “looked at the kid’s eyes.” Brevard players, he said, had “worked their tails off” before the game, which in candor, was a big early season test pitting a larger 3-A school against a 2-A Brevard squad.

Not that everyone predicted the surprise outcome. One print prognosticator said the “… Black Bears should make fast work of Brevard this week.” But the Blue Devils had other ideas.

Brevard displayed a multi-back run-up-the-middle ground game and a swarming defense that gave up some plays but buckled down when things mattered most.

The Blue Devils were immediately on their heels after a Pisgah returned of the opening kickoff to the Brevard 32. Pisgah cashed in on a short field for the opening score at 7:05 of the first quarter.

That’s when Brevard backs and blockers said ‘not so fast.’

Starting at their own 25, the Blue Devils marched down field, biting big chunks of yardage although it took Jacob Stockton to rumble 12 yards to convert a critical third down to the Black Bear 14. Nahshon Griffin polished off the long drive on the next play with a tackle breaking run up the middle to knot the score at 7 — 7.

Brevard’s swarming defense came to play. Unfazed by Pisgah’s shotgun formation — and helped by Pisgah penalties that negated long gains — second quarter Brevard forced a short Black Bear punt. The Blue Devils featured a rotation of several backs that reeled off big chunks of yardage up the middle, including multiple clutch third down conversions of three yards or more.

It didn’t take long for Brevard to respond.

The proficient Blue Devil running carried the load as Brevard engineered their own 75-yard first-quarter drive. The drive featured slash-and-bruise runs into the middle-of-the-line of 7, 3, 6, 8, 12 and a final 14 yards by Griffin and a PAT to knot the game at 7 — 7 at halftime.

At the heart of that power running game was an offensive line Coleman calls “the motor,” a hole opening machine that gave backs room to do their thing. Brevard’s ground game by committee — the trio of PJ Deshauteurs, Jacob Stockton and Nahshon Griffin — rushed 39 times for a tough-nosed 249 yards, more than double the 135 for the Black Bears. Stockton led the stats with 11 carries for 85 yards. “I was so proud of how they competed,” said Coleman.

And compete they did, over and over.

Brevard got rolling to start the second half. A nice kickoff return by Griffin set up the Blue Devils at their own 43 and a nice drive, punctuated by a long pass to Dougher, put Brevard in business inside the Pisgah 20. The momentum, however, was short lived. A fumble on the next play gave the ball back to the Black Bears who proceeded to march down the field, aided by a pass interference call on a long yet under thrown ball, to score for a 14 — 7 lead.

But Brevard came back. Stockton and Deshauteurs made several drive-extending runs, but with the clock ticking down in the third quarter it all went for naught at the Bear 11 when a fourth down pass completion fell two yards short of the goal line and a first down just as the third quarter ended.

Pisgah escaped the shadow of the end zone thanks to a second pass interference call on another under thrown ball, but one play later the real fourth quarter fireworks were just starting.

The Blue Devil’s Isiah Phillips stripped the ball from a Black Bear back and Brevard had new life — and a short field — at the Pisgah 22. Four straight plays later running Stockton burst through a gaping hole to tie the score at 14 -14.

A toughening Brevard defense forced a short Pisgah punt with 5:10 to go and, from their own 31, the ground force of Deshauteurs-Stockton-Griffin became nearly unstoppable. The trio combined to push the ball to the 4 and Stockton waltzed the final yards untouched for the go-ahead touchdown with less than two minutes on the clock. 21-14 Brevard.

Forced to hurry up, the Black Bears used short sideline passes to move to the Brevard end of the field but Black Bear receivers inexplicably stayed inbounds as the clock continued to run.

A scramble by Pisgah’s quarterback reached the Blue Devil 21 with 34 seconds to go. That’s as far as Pisgah got.

Heavy pressure by the Brevard line caused an incompletion and a throwaway. Brevard hustled to keep a third down completion inbounds as the clock ticked away.

But on fourth and long, John Ogle broke through the line to stuff the Pisgah quarterback, causing a fumble Brevard recovered to seal the deal.

The final 16 seconds wound down and Brevard had their victory.

As jubilant students and fans rushed the field, Coleman and his staff were swamped with well wishers.

The upset in hand, the new coach notched his first victory and got praised that seemed well deserved.