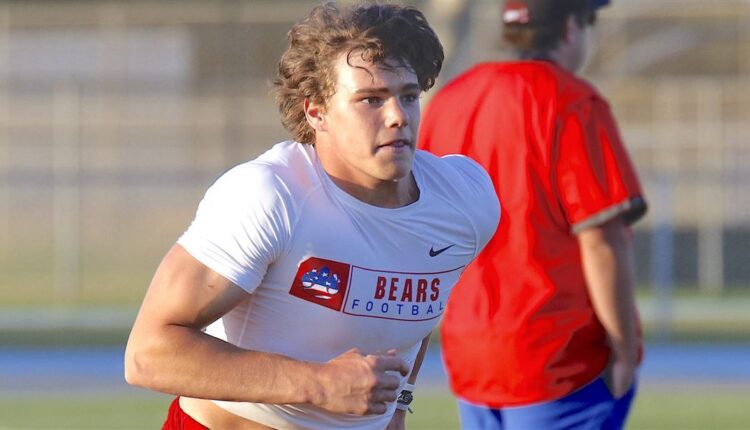 Studt was competing in the Fresno State 7-on-7 passing tournament on Saturday when linebackers coach Tim Skipper and defensive coordinator Kevin Coyle approached him.

“Coach Skipper and Coyle came over to me, asked what my grades were, and said, ‘We’d like to offer you a scholarship to play at Fresno State,’” Studt said. “It was everything, man. It put a huge smile on my face and made everything seem like it was worth it at the end of the day.”

If that’s the case, Studt will not just be patrolling the middle of the defense but catching passes next fall from best friend and Fresno State commit quarterback Jayden Mandal. Studt grew up attending Fresno State football games with Mandal.

“I got a video of me and Mandal from when we were about six or seven, and we’re up there in the stands jumping around and cheering,” Studt said. “Ever since I can remember, we’ve been coming to Fresno State. We’ve been coming to these games since we were small.”

Now grown, Studt fits the mold of heavy-hitting linebacker at 6-foot-2 and 220 pounds. He possesses the power to unleash a powerful first hit and push the pile backward, but his versatility is another strong suit. He moved around the field in Buchanan’s multiple defense last year, spending time coming off the edge and dropping back into coverage.

Studt liked the similarities in multiple defensive looks between Buchanan and Fresno State.

“I’ve always been big on not running the same stuff over and over again, and I think [Coyle] does a very good job of that,” Studt said. “It gives me a good clue of how we’re trying to take this road. Obviously, with the versatility of the defense, I really enjoy it and really like the way things are going on right now.”

Studt’s road of recruiting has just begun. He’s already received interest from San Diego State, Boise State and Washington, but Fresno State goes down in the books as being the first offer for Studt, a major factor for him.

“Offer No. 1 has a special place in my heart,” Studt said, “especially from the hometown school.”

Boating in Fresno Co. over the holiday weekend? What you need to know to avoid…