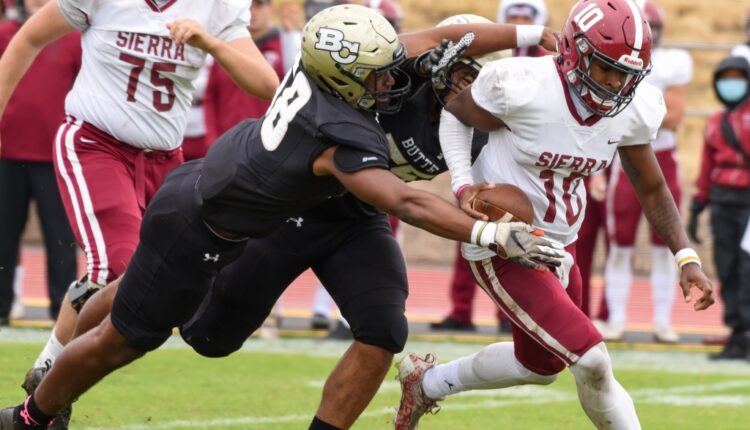 MODESTO — The Butte College football team scored 14 points in the first quarter and outscored Modesto Junior College 35-7 in the second half en route to a 49-14 win Saturday in Modesto.

With the win, the Roadrunners improved to 3-1 with one game remaining until the start of NorCal Conference play.

Butte’s scoring started on his second possession of the game, when running back Caleb Ramseur scored from 1 yard away following a 23-yard pass from quarterback Tanner Hughes to wide receiver Jailen Hammer. It was Ramseur’s second rushing touchdown of the season.

The Roadrunners also scored on their next possession when Hughes completed a 46-yard pass to DJ Jackson for a touchdown — Jackson’s first touchdown of the season.

Modesto trimmed the butte lead to one score with 22 seconds left in the half on an 8-yard rushing TD by Aiden Taylor.

On Butte’s first possession of the second half, the Roadrunners drove 50 yards and capped it with an 8-yard rushing touchdown by Christian Vaughn to take a 21-7 lead.

Hughes was intercepted on Butte’s next possession, and Taylor scored from 3 yards away to trim Butte’s lead to 21-14. Ramseur responded for the Roadrunners scoring his second TD of the game with 3:33 left in the third quarter, again from 1 yard away.

Just before the end of the fourth quarter Hughes completed his second passing TD of the game following a fumble forced by Butte’s Thomas Lane that Aiden Sullivan recovered. Hughes threw a 43-yard pass to Logan Blair with 22 seconds left in the third quarter to give Butte a 34-14 lead.

Following a Modesto punt, Butte scored on his first possession of the fourth quarterer on a 5-yard rush by Tanner Hughes that gave the Roadrunners a 41-14 lead.

With Butte leading 41-14, freshman quarterback River Sayre began the Roadrunners’ next possession behind the center. Sayre completed a 20-yard pass to Tre Patterson with 10:07 left in the fourth quarter to give the Roadrunners a 47-14 lead.

Butte’s final score came with 2:56 left in the fourth quarter when the Roadrunners combined to force a 9-yard sack on Modesto quarterback Cruz Marines in the end zone for a safety.

Hughes finished the game 9-of-13 for 204 yards and a pair of TDs, and Sayre went 2-of-3 for 27 yards and one TD. Ramseur led the Roadrunners in rushing yards with 79 yards on 17 attempts and a pair of touchdowns. Vaughn ran nine times for 74 yards. Deremy Stubbs had one catch for 55 yards, Jackson had one for 46 yards, Blair had one for 43 yards and Hammer led the Roadrunners in receptions with three for 40 yards.

On defense, Gabe Foster and Thomas Lane led Butte with six sacks each, and Elijah O’Neal had five tackles and three sacks. O’Neal now leads Butte in tackles with 25 and sacks with 12.

Butte now prepares for a second straight road game next week, when the Roadrunners will play College of San Mateo at 1 pm Saturday in San Mateo.