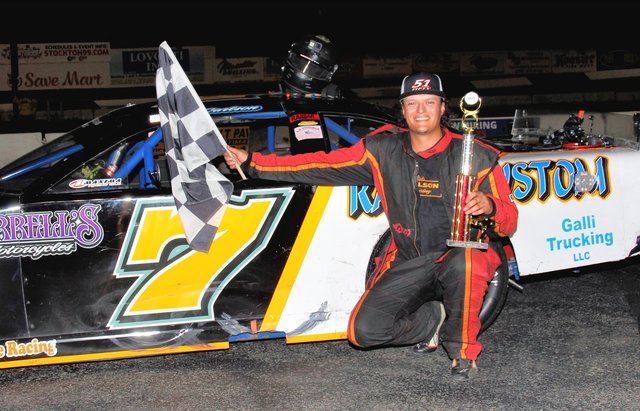 STOCKTON — Ty Carlson, of Stockton, snagged the lead in the opening laps of Saturday’s 50-lap feature for the Stockton Late Models and never looked back as he drove to his first victory of the 2022 season.

“It was firing off great tonight. We were on the same tires from the last race and I don’t know if that was a game changer, but we saved some money and

Ty Carlson holds the early lead in the Stockton Late Models at 99 Speedway on Saturday. JESSICA McANELLY/Jessie’s Fast Photos got the win,” Carlson said after the race. “I can’t thank my crew enough because I wouldn’t be up here without them.”

Lining up alongside of Stockton’s JoJo Stearns to lead the 11-car field to the green flag, Carlson quickly pushed to the front as several cars while Stearns, Stockton’s Gary Shafer Jr, and Escalon’s Sam Solari jostled for position behind him.

Two weeks ago Solari used a bump-and-run on Shafer to take the race win and on Saturday it appeared that Shafer returned the favor by hitting Solari coming out of Turn 2 of the second lap, sending Solari into a spin and bringing out a caution flag. Solari managed to stay off the wall and was able to restart the race from the back of the field, but only after showing his displeasure with Shafer by stopping directly in front of him on the front stretch.

“I guess Shafer thought he owed me one. When my car was running like his I drove like that too,” Solari said sarcastically. “I’m good with it.”

Shafer was also sent to the back for causing the spin and the pair spent the remainder of the race trying to get back to the front much to the pleasure of Carlson who cruised out in front as his advisories fought with each other behind him. Solari was able to move under Stearns to take over second with 12 laps to go, but without a late caution he could not close up on Carlson and settled for a frustrating runner-up finish.

“My spotter was telling me that they were battling behind me so I could slow down the pace, but I don’t think I ever let off,” Carlson said. “The car was great and I think we could have held them off, but I was still praying for no cautions at the end because you never know what could happen on a restart.”

Rounding out the top five were Stearns, Shafer and Stockton’s Larry Tankersley.

Donnie Darter, of Valley Springs, held off Stockton’s Jeremy Tucker and Salida’s Chad Holman to take a wire-to-wire victory in the 20-lap Bomber main, his sixth consecutive win in as many starts this season.

“We have put in a tremendous amount of work just to get this car out here this season,” Darter explained after the race. “We still have some bugs. The brakes were going away tonight, but all our hard work is paying off.”

When the race car of B-4 points leader Joe Flowers, of Manteca, broke in practice, his son-in-law Josh Cross made like Lassie and came to the rescue.

B-4 winner Joe Flowers holds up his latest trophy earned at Stockton 99. JESSICA McANELLY/Jessie’s Fast Photos After setting fast time in qualifying Cross gladly gave up his car and loaned it to Flowers for the 25-lap B-4 feature.

Flowers took full advantage of the opportunity by charging to the front of the 16-car field and holding off repeated challenges by Ethan Rumsey, Barrett Sugden and the pink Hello Kitty car of Andrew Rumsey, all of Stockton, for the rest of the caution filled race which eventually ended on a checkered-yellow two laps early.

Afterward, Flowers expressed his gratitude to Cross, the defending B-4 division champion, who has elected not to run fulltime this season, as they celebrated the victory on the front straight.

“Oh man, it was hectic out there. Rumsey ran into the back of me a couple of times, but it is all good,” said Flowers, who now has three wins this season. “I have to give a big thanks to Josh for letting me drive his car tonight for the points.”

Racing returns to the 99 Speedway on Sunday, July 3, with the annual Ron Strmiska Memorial Firecracker 125 featuring the Stockton Late Models, Bombers, B-4s, and B-4 Juniors as well as a huge fireworks show before the main event.