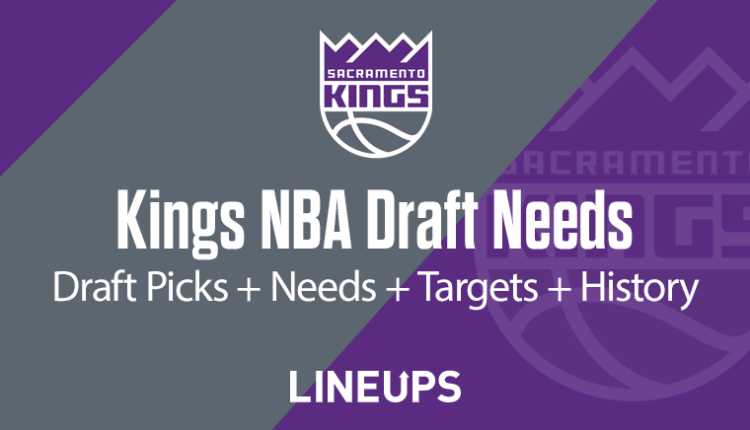 This draft will determine the direction of the Sacramento Kings for years to come. They own the 4th overall pick, but Sacramento wants to compete immediately since their last playoff appearance was in 2006. Do they trade the pick for an established veteran and forsake the chance to select a potential franchise player? Or do they recognize that their roster is miles away from competing truly and try to find a cornerstone in the draft?

The Kings have a number of free agents, although none are absolutely crucial to their rotation. Jeremy Lamb, Josh Jackson, and Damian Jones are unrestricted free agents. Meanwhile, Donte DiVincenzo and Neemias Queta are both restricted free agents. It’s unlikely DiVincenzo returns after he accused the Kings of benching him to slash his free agency value. They should, however, look to bring back Lamb and Jackson to boost their forward depth. Damian Jones would also operate as a solid 3rd center, and he is still relatively young. Sacramento has a club option for forward Trey Lyles. Considering Lyles played well for the Kings after they acquired him at the deadline, it’s safe to say they will pick up his option. Because he can stretch the floor, Lyles pairs well with Domantas Sabonis on the offensive end.

The Kings also have solid options in the frontcourt. Domantas Sabonis is a two-time All-Star who averaged 18.9 PPG, 12.3 RPG, and 5.8 APG in 15 games for the Kings last season. Sabonis can clean up the boards, and they will be able to run the ball through him as a point-center. His frontcourt partner – Harrison Barnes – is a two-way forward who can space the floor, play solid defense, and provide 14-18 PPG. Barnes won’t dominate a game, but he is a steady, reliable presence. Richaun Holmes provides scoring and rebounding off the bench at backup center. Holmes can be a capable starter in case of injury too.

Historically, a franchise needs a top 10 player to compete for a championship. Fox and Sabonis are talented, but they are not even top 30 currently. They have to function as a complement to the 1st option and not be that themselves. Unfortunately, players of this caliber are seldom on the market, and the 4th overall pick wouldn’t be enough to compete with other potential offers from franchises like the Hawks and Knicks anyways. Their role players are decent, but none of them scream productivity for a championship team. Overall, the roster projects as a mediocre team that doesn’t make the playoffs but also doesn’t secure a high pick.

The Kings were 25th in 3PT%, and the shooting guard position needs a serious upgrade this off-season. Because Fox (29.7 3PT%) and Mitchell (31.6 3PT%) are ball-dominant and poor perimeter shooters, it is difficult for them to play together. Sabonis and Holmes are also poor perimeter shooters, so focusing on spacing has to be the biggest priority. Justin Holiday is their best option at shooting guard currently, but he is better suited coming off the bench. If the Kings do not address this issue, their offense will be easily exploited, ineffective, and cramped next season.

If the Kings hold onto the pick, they have a number of options. Should they take the best player available, it would land them combo guard Jaden Ivey (assuming Paolo, Chet, and Jabari are gone). The fit would be awkward with Fox and Mitchell on the roster, so Sacramento may benefit from trading Fox and pairing Mitchell with Ivey. Their cap sheet would immediately clear up without Fox’s monster contract, and there would be a viable path for Mitchell to be the starting point guard.

If they are set to compete with the Fox and Sabonis duo, Keegan Murray is an NBA-ready forward who would immediately boost the starting lineup. Even with Murray though, Sacramento likely still misses the playoffs.

If the Kings choose to acquire potential over production, Leonard Miller is a tantalizing prospect with the 37th pick. He’s a 6’10” forward who has shown flashes of being a do-it-all forward. Sacramento can afford to be patient with the 18-year-old forward, which is exactly what he needs.

Christian Braun—a three-point specialist from Kansas—would aid their weak perimeter shooting. If Sacramento wants to contend now, Braun would be a great option at 37. He’s also shown the ability to shoot off the dribble and run the pick and roll in spurts.

Gabriele Procida is an athletic wing who can catch and shoot from deep. His high motor and transition game will give the Kings more options offensively. I love the fit here at 49. Sacramento could also target some power forward depth here.

With their last two 1st round picks, the Kings selected Davion Mitchell and Tyrese Haliburton despite having Fox on the roster. They are not afraid to take the best player available in their mind despite their need. If they stay at 4, I expect them to draft Ivey and worry about the fit later. After passing on Luka Doncic and Trae Young for Marvin Bagley, Sacramento is wary about missing the top available talent.