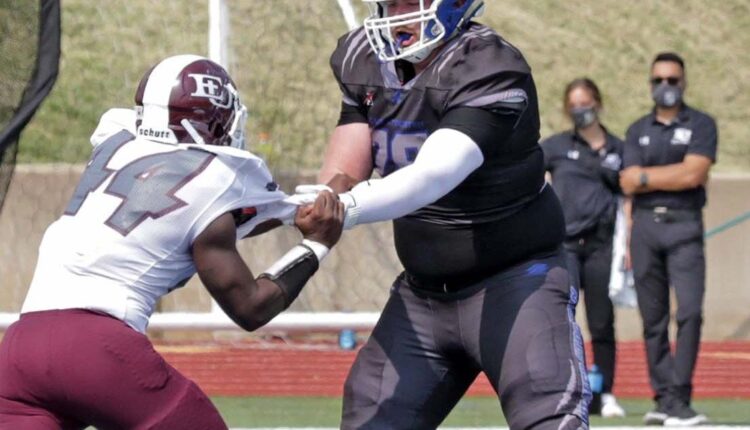 CANTON, Mo. — Day 3 of the NFL Draft was a stressful afternoon for Andrew Rupcich.

After a superb collegiate career at Culver-Stockton, the offensive tackle awaited a call from one of the many teams that scouted him.

The fourth round passed. Then the fifth, sixth and finally the seventh.

A Nashville area code popped up.

“A rush of serotonin just hit my body,” Rupcich said. “I don’t know how else to explain it, just pure happiness.”

Rupcich was signed as an undrafted free agent by the Tennessee Titans. Since signing on the dotted line, Rupcich has participated in the Titans’ rookie minicamp in May and a mandatory minicamp in June.

Despite coming from a small NAIA college of just over 1,000 students, this wasn’t much of a surprise to anyone around Rupcich.

Rupcich was also the only NAIA player to participate in the NFLPA Collegiate Bowl and the NFL Combine, something the three-time AFCA All-American takes pride in.

“Being able to showcase that you can do it from anywhere kind of opens eyes to high school kids trying to make the decision of where they’re going to college,” Rupcich said. “Everybody’s thought is D-1 or bust-type attitude, but it just shows for me and my school that you can come from anywhere.”

And during the process of impressing scouts, Culver-Stockton was right behind him. The Wildcat community gathered at a Canton restaurant to watch ‘Rupe’ play in the Collegiate Bowl.

Some members of the coaching staff also traveled to Indianapolis for the combine – something Culver-Stockton offensive line coach and offensive coordinator Sean Chase will never forget.

While Rupcich has the NFL size and physicality down, Chase says one thing that makes Rupcich an NFL offensive lineman is his love for football.

“He loves competing, huge competitor in practices, in games, that’s just something he absolutely loves doing,” Chase said. “He loves the mental side of the game and wanted to learn as much as he could and have a lot put on his plate.”

Off the field, the 23-year-old is highly praised as not only a football player but a human being.

Head coach Tom Sallay says Rupcich did everything right during his time at Culver-Stockton.

Sallay said Rupcich was a good student with a 3.6 grade-point average, never missed anything and was a great person around the Canton community.

Rupcich also built bonds with his teammates and coaches at C-SC. This includes Korbin Marcum, a quarterback for the Wildcats from 2017-20.

“I’d love to say (he’s) a big teddy bear but that’s what everybody says,” Marcum said. “He’s the friendliest guy and the biggest party animal, all in one. If you could pick one person to be your friend for life, he’s a big candidate.”

“He’s somebody that I wish could’ve been in the program forever,” Chase said. “He’s always the first guy to come into the offices just to say hi to the coaches, to hangout. I used to have to kick him out of the office sometimes because him and some of the other O-linemen would just want to hang out and talk.”

The biggest reason behind Rupcich’s success on the field is the coaching staff at Culver-Stockton, according to the four-time first-team all-conference honoree.

Rupcich gave credit to his former coaches for getting his name out there and giving him support during his five years in Canton.

The support continues with Rupcich calling the staff “a big family” as they are planning to attend his first preseason game in Baltimore against the Ravens.

“It helps fuel me, it helps me knowing that I have family in every location that they’re going to be there for me,” Rupcich said. “Everybody wants the pure best for me and it’s really nice to have and to see.”

The Wonder Lake, Ill., native came on the scene during Sallay’s first year as head coach in 2017.

Sallay was looking to turn around a program that went a combined 1-21 in two seasons before he arrived in Canton.

Since then, Sallay has led the Wildcats to two winning seasons in his five years there, including an 8-3 mark in 2021.

Rupcich played a big role in the rebuilding of Culver-Stockton, lending a hand in recruiting, being a leader and making 48 consecutive starts for the program.

“He played every single snap for five years. We were always able to count on him,” Chase said. “He was a great teammate, a great leader. There wasn’t too many times I needed to raise my voice before he did. He made my job easier with the leadership he brought.”

Now as Rupcich enters the Titans training camp Saturday, he says his biggest goal is to help his new team in any way he can. And when it’s time for kickoff in Nashville, Rupcich hopes he can fulfill his childhood dream – earn a roster or practice squad spot on an NFL team.

“That would just show that all the hard work I put in over the years is allowing me to get to this position where I am now. Now, it’s about the finishing touches, just polishing it all off,” Rupcich said. “It would mean my dream is coming true, essentially. It’s all I’ve ever wanted.”