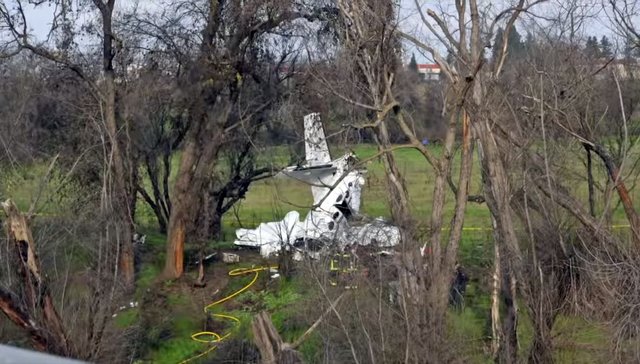 Investigators from the Federal Aeronautics Administration (FAA) are trying to determine the cause of Wednesday afternoon’s plane crash east of Mitchell Road near the Modesto Airport, that claimed one life.

Killed in the crash was the pilot, whose name was not released pending notification of relatives. There were no passengers aboard the aircraft, which typically has six to eight seats.

At approximately 1:10 pm several persons reported seeing the dual engine Cessna 414 bank and dropping just east of Mitchell Road on the Modesto side of the Tuolumne River where it was found crashed into a thicket of trees at the edge of a field.

Modesto Police Sgt. Robert Gumm said the twin-engine plane had taken off from the 10L runway and experienced some kind of problem shortly into the flight. A flight tracker showed the plane flew over Ceres in a southwesterly direction and then headed northwest making it as high as 3,000 feet and reaching the Paradise Road area before contacting the Modesto Airport control tower to say he was returning for an emergency landing. A number of people saw the doomed aircraft passing over the center of Ceres low to the ground in the pilot’s attempt to return to make a landing. Just before the crash the plane was seeing banking as it came over Mitchell Road.

The plane was reportedly hanged in Concord. The pilot may have been a resident of an east Bay Area.

Mitchell Road was closed to traffic in Ceres through the night to allow emergency workers and investigators to access the crash site.

Second Half Surge Propels Hawai’i Past No. 8 Fresno State