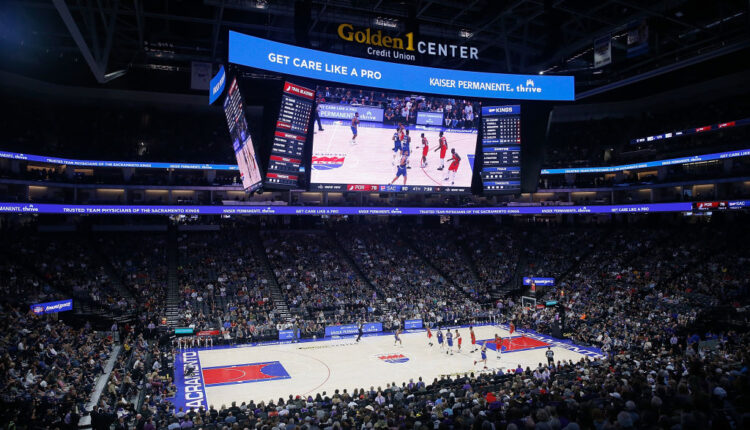 A general view of the court at the Sacramento Kings’ Golden 1 Center in Sacramento, California.

During free throws for the visiting Philadelphia 76ers, the Kings flashed a Dallas Cowboys logo on the video board to elicit boos from a 49ers-friendly crowd. “Lots of boos have followed,” Sactown Sports 1140 Kings beat writer Frankie Cartoscelli tweeted Saturday night. “49ers fans in attendance are ready for tomorrow.”

The boos weren’t quite enough Saturday, though, as the Kings fell to Philly 129-127.

The 49ers, meanwhile, host the Cowboys at Levi’s Stadium in the NFC’s divisional round at 3:30 pm Sunday. The winner will advance to the NFC Championship and travel to Philadelphia to take on the top-seeded Eagles, who decimated the New York Giants Saturday night, 38-7. Philadelphia quarterback Jalen Hurts dominated (16-for-24, 154 passing yards, three total touchdowns), as did the Eagles defense, which held Giants quarterback Daniel Jones to 135 passing yards and zero touchdowns. The Philly D racked up five sacks and one interception.

It’s the second-straight postseason meeting between the Niners and Cowboys — San Francisco dispatched Dallas in the wild card round last year in Arlington, Texas. The now-infamous Cowboys loss, wherein Dallas failed to even get off a final play down six, was compared to the death of Jesus this week by head coach Mike McCarthy.

Grant Marek is SFGATE’s Editor in Chief. He’s spent the last 21 years in various editorial roles for the likes of Thrillist, Yahoo! Sports, the SF Examiner, The Desert Sun, The Santa Clarita Signal, and Sports Illustrated. He’s a UC Berkeley graduate, and has lived in the Bay Area for 18 years. Email: [email protected]