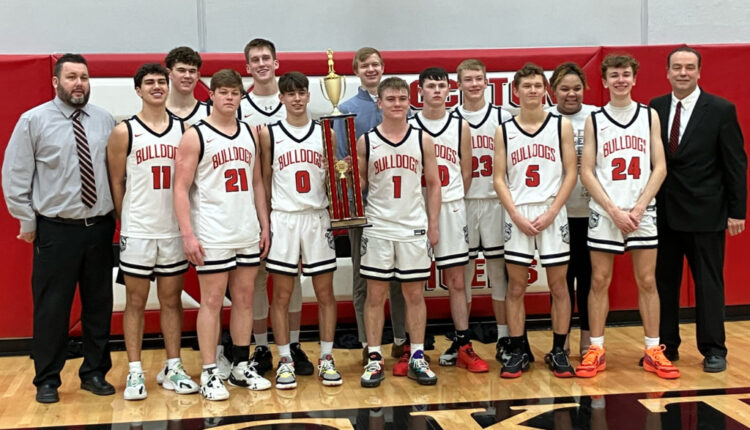 By Brennan Stebbins (For OzarksSportsZone.com)

It was barely a month ago that the El Dorado Springs boys basketball team edged Stockton for a one-point win at home.

The Cedar County rivals matched up again on Saturday in the championship of the 53rd Annual Stockton Tournament and this time the Bulldogs put the Tigers away early.

Landon Murry poured in 30 points and El Dorado Springs took 20 shots from the free throw line in the fourth quarter as the Bulldogs earned a convincing 64-39 win to avenge last year’s loss in the tournament finals.

And the difference from last month’s 42-41 win?

“For us it was the worst shooting game we’ve had the entire season,” Johnson said. “Our percentages were way low. The lowest in two point field goals, three point field goals and free throw shooting. And Landon struggled. I ended up having to put a freshman in at point guard in the first quarter because he was struggling.”

After a four-point first quarterer, Murry poured in 12 in the second, eight more in the third, and then made six free throws in the fourth to cap the effort.

Murry made it a 20-point game with a left-handed layup in the third and a free throw by Joe Gordon made it a 27-point game in the fourth, the largest lead of the night.

Gordon also provided a highlight in the final period with a breakaway dunk after almost getting pulled from the game.

“He really wanted to get a dunk tonight,” Johnson said. “The running joke was he was shooting a free throw and my son Jake was coming in the game and I said watch and see, Joe’s going to miss this so he’ll stay in the game and they were like, he won’t do that – and he missed it.

“I looked at him and he was smirking, then he comes down and gets the dunk,” he said. “I’m sort of glad he did, in a way.”

Johnson said his players also had something to prove after beating Stockton when the Tigers were missing Jay Baxter.

“All we’ve heard all along is now Jay’s back, you guys are going to get beat so that’s been in their heads the whole time,” he said. “Those kids are always good friends anyway, several of my guys and Jay and there’s that friendship but you know how it is with friends, they want to beat each other. Tonight you could tell they wanted to prove a point, that it wasn’t a fluke the first time, and tonight we played much better.”

The Bulldogs made 13 of 23 at the free throw line and took 14 attempts in a span of 80 seconds early in the fourth quarter.

The Tigers were just 1 for 2 at the free throw line.

China Peak turns people away due to lack of parking

76ers, without Embiid and Harden, edge Kings for 5-0 trip