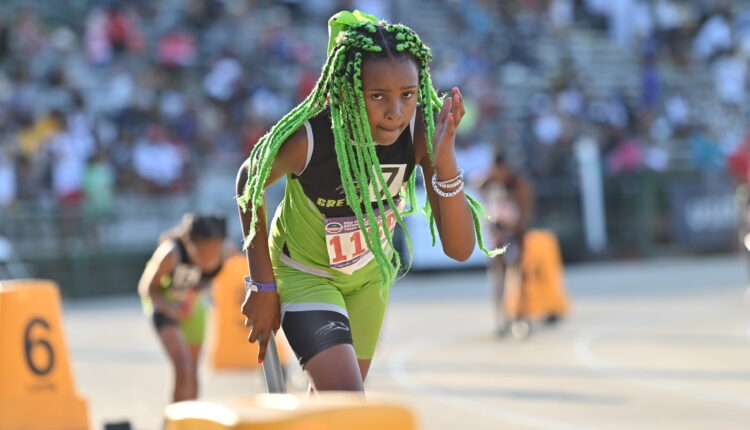 SACRAMENTO, California — It was another day of strong field performances on day four of the USATF National Junior Olympic Track & Field Championships, highlighted by a repeat champion and the closest finish in the meet so far.

Mary Taylor (Dave Bethany TC/USATF Gulf) prevailed in a nailbiter of a girls 13-14 triple jump final, where the top three finishers were separated by a mere centimeter, topped by a tie for the silver medal. Taylor, Zenobia Witt (Alpha and Omega Athletics/USATF Colorado) and Milena Sciullo (Swift Arrow Track Club/USATF USATF Three Rivers) entered the final two attempts as the only three competitors to clear 11m, but took it another level when all three jumped over 11.30m consecutively in the fifth round. Taylor’s mark of 11.32m/37-02 narrowly gave her the gold position over Witt and Scillio’s shared mark of 11.31m/37-01, setting the podium of an unforgettable final.

The excitement continued with the boys 15-16 triple jump, champion Brandon Cheeks II (CTG Development/USATF San Diego-Imperial) won comfortably with his 8.84m/22-05 jump in the sixth round, but the second through fourth finishers were separated by only two centimeters. Jerald Martin (West Coast Speed/USATF San Diego-Imperial) leaps 6.72m/22-01 in both the fourth and fifth round to narrowly take silver, with Jackson Norris (Track Houston Youth Track Club/USATF Gulf) and Tommy Schreiner (Team NoDak Youth/USATF Dakotas) taking third and fourth in 6.71m/22.00 and 6.70m/21-11.

A full list of results can be found here. Watch all the action live on USATF.TV+.