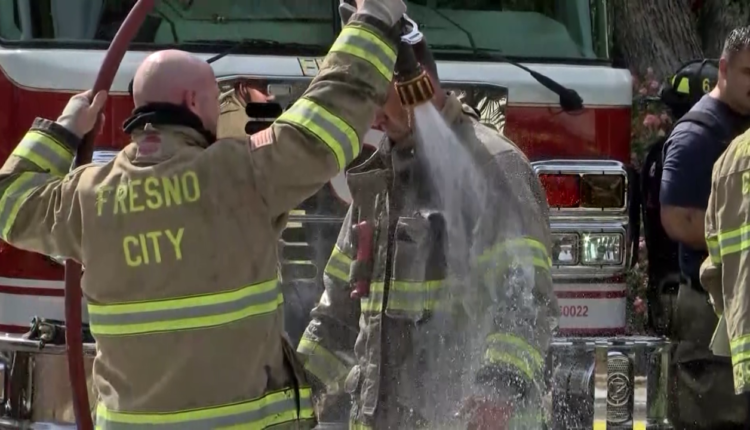 FRESNO, Calif. (KSEE/KGPE) – With these extreme temperatures in the Central Valley, Fresno firefighters are also bracing to work in the heat, physically and mentally.

Jonathan Lopez with Fresno Fire said crews make sure they’re hydrated before they come in and get enough sleep the night before.

“We try and make sure all the firefighters are physically and mentally prepared for the heat they’re going to experience,” said Lopez.

Lopez says during this time of year in the summer months, the need for firefighters is demanding as more structure and grassfires break out.

“On the scene of a fire, the incident commander have the option to call for more resources… when it looks like the fire is going to go for an extended period of time,” said Lopez.

And the extreme heat poses an additional danger for firefighters, the gear they wear weighs over 50 pounds, so they have protocols in place to make sure everyone is safe while on the job.

“Any time a firefighter has gone through two air bottles… we make sure they take their protective gear off and they’re able to rehab in the shade or in an air-conditioned environment” he adds.

Lopez says heat exhaustion can happen quickly, not just for firefighters, but anyone outside for an extended period of time.

“When someone is overworked and experiencing too much heat they may present first an altered mental status meaning they’re not responding appropriately to questions, they’re acting dazed or confused,” he said.

He said those are some of the warning signs you need to get out of the heat and cool down to prevent a possible heat stroke.

Equity is goal, not mandate, in California electric car rule