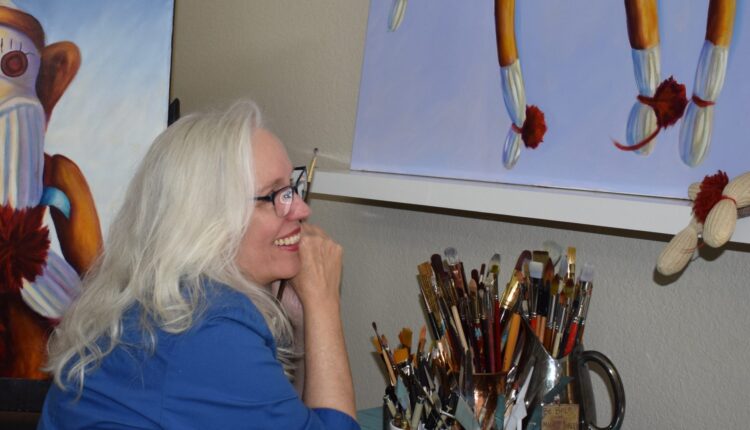 Two decades ago, Shannon Grissom cleaned out an old box filled with her late mom’s keepsakes. What was once an unlikely discovery of a sock monkey turned into a painting subject, now the illustration on an oracle card deck.

“I didn’t play with sock monkeys as a kid, didn’t have one. But I thought, ‘He’s really cool,’ and he made me smile,” Grissom said.

She said it was a way to process the grief and remember the best parts of her mom, and she kept painting.

“Now all that’s left instead of the grief is all the good stuff,” Grissom said.

Over the past 20 years, her sock monkey paintings have been licensed on golf club head covers and carried on tour by PGA pros. Now they’ve landed on oracle cards, sold online at Walmart, Barnes & Noble and Amazon. The boxed set includes 46 oracle cards and a 128-page guidebook. She hopes the cards help people discover their playful energy, embrace the nostalgia and open up to love.

“I’ve always wanted to bring joy to people through my artwork and the feedback that I”m getting on this is that it makes people smile, it’s making people look at the bright side – that people who’ve never even seen oracle cards , don’t even know what they are enjoying these,” Grissom said.

There’s always been a metaphysical component to her work, Grissom says. She herself looks at oracle cards everyday, but never imagined a day where she would write and illustrate her own for others to enjoy.

“When I painted them, each painting was created with a state of being in mind, so it wasn’t just a cute image,” Grissom said.

Creating an oracle card deck has always been a dream of hers, but wasn’t fully realized until the pandemic closed down one of her art displays.

She said she hunkered down, and channeled the writing on the cards.

“I just heard in my mind’s ear, ‘It’s not coming from you, just write,’ and it was just channeled,” she said.

After pitching her product to Beyond Words Publishing, an imprint of Simon & Schuster, she was picked up almost immediately.

“You’re built over time and you evolve over time. That’s how the paintings come out as well,” Grissom said.