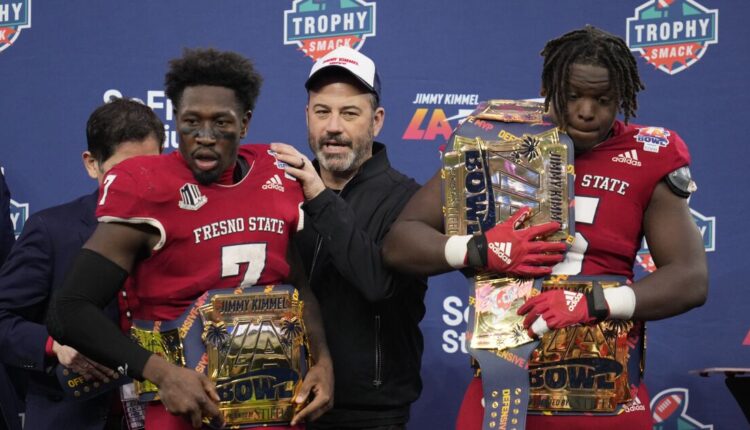 The Jimmy Kimmel LA Bowl is not like other bowls.

No other bowl game is named after a living person, let alone a late night host. No other bowl game has a camel mascot that has a striking resemblance to Jimmy Kimmel named Jimmy Kamel. It’s meant to be quirky and fun.

Before kickoff, Kimmel was the star of the show. The 55-year-old comedian joined the Washington State marching band as they took the field. Equipped this year as he was last year with a clarinet, Kimmel stumbled along trying to execute WSU’s complex drill, missing all his dots.

After his big performance, the bowl’s namesake addressed the sparsely filled stadium — attendance was listed as 32,405 — calling the game a “tax write-off” and joking that most of the attendees were holding their seats for Taylor Swift’s sold-out concert run at SoFi Stadium in August.

The first half of Fresno State’s 29-6 win over Washington State matched the wonky energy of the bowl’s host with Bulldogs quarterback Jake Haener nearly injuring himself after colliding with a cameraman and Cougars quarterback Cam Ward running out of the back of the end zone for a safety.

Washington State coach Jake Dickert credited the Bulldogs defense, but ultimately chalked up the loss to his team’s inability to find its tempo.

“I think it was just a rhythm thing. I don’t think we ever got into a rhythm,” said Dickert, whose team ended the year 7-6. “We never established running the football, which is obviously a key piece to what we always want to do.”

Running back Jordan Mims shined bright for Fresno State (10-4) with 209 rushing yards and two touchdowns, including a two-yard scoring run with 8:29 left in the fourth quarter. His performance led to him wearing the bowl’s unique championship belt around his waist after the game.

“It’s been, you know, surreal,” Mims said of his performance and his team’s nine-game win streak. “It just feels good to leave a mark like this on a 10-win season.”

Fresno State fan Courtney Findley had plenty to root for during the game. The 20-year-old is transferring to the school next year and is married to assistant student coach Nathanael Findley, who relays signals on the Bulldogs sideline.

“I drove all the way from Bakersfield today to be here,” said Courtney Findley, who also works as a preschool teacher. “I drove from Fresno to Bakersfield and Bakersfield here — it’s been like a five-hour drive.”

Findley enjoys being able to get an “inside look of the game” thanks to her husband’s stressful job.

Speaking on the peculiarity of bowl’s nature, Findley found the event’s quirks amusing.

Elsewhere in the stadium, Guillermo Rodriguez, Kimmel’s lovable sidekick and breakout star of “Jimmy Kimmel Live” was enjoying the atmosphere at SoFi.

“It’s a lot of fun. Everybody’s so happy, everybody wants to see a good game,” Rodriguez told The Los Angeles Times. “After all this pandemic and all this, we had to wear a mask and right here you feel free, you know? You watch the game and everything is good.” Jimmy Kimmel performs with the Washington State marching band before the LA Bowl at SoFi Stadium on Saturday.

Contributing to his lightness was the fact that he was taking questions at the event and not asking them. He is usually sent out to interview the biggest athletes at Super Bowls and NBA Finals for “Jimmy Kimmel Live.”

When asked whether he enjoyed working the Super Bowl more or the Jimmy Kimmel LA Bowl, Rodriguez had a clear favorite.

“I think here … because I work less,” Rodriguez said while letting out a laugh. “Super Bowl media, oh my god, it’s a lot of work. It’s intense because we have to accommodate [to when players] have time….this is more fun.”

Aside from the extravaganza of the game, Rodriguez noted that he feels good that the bowl will benefit the Boys & Girls Club LA Harbor and LA Metro.

“You gotta help if [someone] needs something, you know? If you have it, it’s good to give,” he said. “If you can help, anybody any charities, it’s good.”

Rodriguez also gave some insights about Kimmel and his camel counterpart.

Rodriguez confirmed that Kimmel was actually playing his clarinet alongside the Washington State band.

“He loves to play the clarinet, that’s one of his hobbies,” Rodriguez shared. “He loves that and he’s playing for real.”

While talking about his affection for Jimmy Kamel, Rodriguez had an important warning for those looking to meet the eclectic mascot.

“Oh, the camel is a lot of fun. Just be careful—he might throw up on you.”