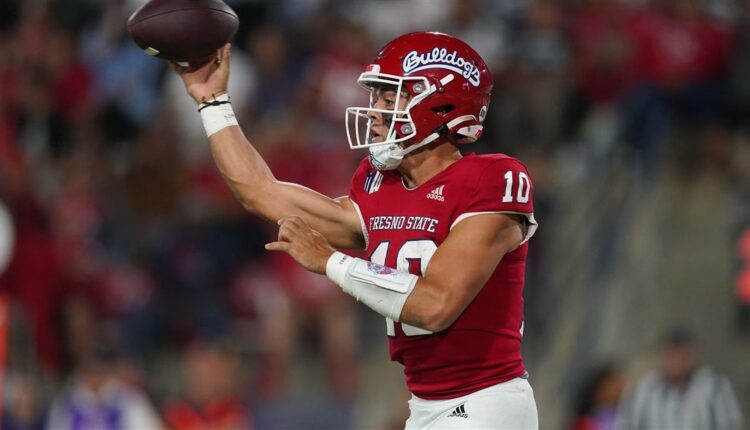 The winner of Fresno State versus San Diego State (both 2-1 in conference) on Saturday could ultimately decide the Mountain West’ West Division title. And the Las Vegas oddsmakers are projecting the Bulldogs as a touchdown-plus favorite.

When looking at past betting trends for the two programs, Fresno State has rarely fallen as a home favorite of a touchdown or more in recent memory. The Bulldogs are 26-4 at home when favored by seven or more points in the last decade. But many of those games had lopsided spreads of 20+ points.

In narrowing down home games where Fresno State has been favored by between five and nine points – well, there has not been one at Valley Children’s Stadium since 2017. The Bulldogs defeated Nevada 41-21 as 7.5-point favorites. The Bulldogs have won their last three home games with favored spreads between five and nine points. The last such loss came against San Jose State in 2011 as 6.5-point favorites.

On the opposite side, San Diego State has lost its only game as a touchdown-or-more road favorite this season. The Aztecs were 22.5-point underdogs at nationally-ranked Utah and fell 35-7. They do have two wins in their last five tries as a program: In 2019 they defeated UCLA 23-14 as 7.5-point road underdogs and in 2018 they won 19-13 at Boise State as 13-point underdogs. In 2018, the last time the Aztecs visited Fresno State, they fell 23-14 to the Bulldogs as 10-point road underdogs. In road games with underdog spreads of five and nine points, SDSU has won five of its last nine – but only one of three since 2019. The other wins came between 2009-13.

The 3-4 Bulldogs are 2-5 against the spread this season but covered in their back-to-back wins going into this week. The 4-3 Aztecs are also 2-5 against the betting spread, coming off a spread-covering win of 23-7 at Nevada as seven-point favorites.

A big wrinkle in this game could be the availability of Fresno State star quarterback Jake Haener, who has been considered week-to-week for the past five weeks since an injury at USC. But back-up QB Logan Fife comes off his best performance in the Bulldogs’ 41-9 win at New Mexico.

“I think that’s becoming pretty evident that any young quarterback that starts out the first game, what is it his fourth now, but each week he gets more comfortable,” Fresno State head coach Jeff Tedford said of Fife. “He’s more poised, he never gets shook up during the game. He’s always running the offense and making sure everybody is where they need to be. And he threw some really good balls today as well.”

Saturday’s contest, with the Old Oil Can rivalry trophy also on the line, will kick off at 7:30 pm PT at Valley Children’s Stadium. The game will be nationally televised by FS1.