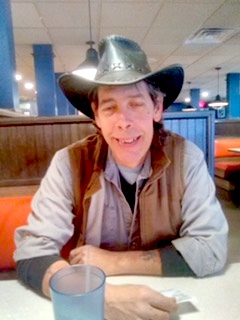 Submitted photo A benefit for longtime area resident Pat Green will be held from noon-5 pm Saturday, June 25, at the Stockton Fire Hall.

A benefit is set to be held for Chautauqua County resident Pat Green.

Green is a longtime area resident, having lived in Silver Creek, Forestville and Cassadaga. In 2009, Green suffered a back injury leading to surgeries in 2010 and 2011, which also eventually led to him becoming permanently disabled. In 2017, he suffered a heart attack, which would be his first of three.

On March 15, Green was taken to UPMC Hamot in Erie, Pa., for treatment of chest pain, and was later transferred to the Cleveland Clinic. He has had a balloon and heart pump implanted along with a left ventricular assist device (LVAD).

“He’s been home for the last week and a half,” said Stephanie Green, his wife. “We do have to go back to Cleveland for checkups.”

Green is also in need of a new defibrillator and has been evaluated for a heart transplant, but was denied at this time because his lungs are too weak. He currently has to wear a battery pack or be plugged into a wall unit, and cannot go swimming or do anything water-related, to avoid the risk of his controller and heart pump stopping. There will be no update on this for at least a year, Stephanie Green said.

“This is one of the reasons for the fundraiser, because when it happens they expect you to be able to pay for the flight,” she said. “There are a lot of people, though, that have had LVADs put in and then were put back on the list for a heart transplant, so that’s what we’re hoping for.”

On June 16, Green also wants to be “going back in” for a cardiac catheterization procedure.

A benefit for Green will be held Saturday from noon-5 pm at the Stockton Fire Hall, 28 Stockton-Kimball Stand Road, Stockton. The benefit is to help with medical, travel and living expenses.

“We will be having a basket raffle, hot dogs, drinks and a bake sale,” said Aimee Ames, one of the benefit organizers. “Everything has been donated to us and can be bought with donations.”

“Everybody can call or text me if you have questions, or to find out more about donating or gift baskets,” Ames said. “Right now money is our main goal, so I would just like people to come out to the event and donate.”