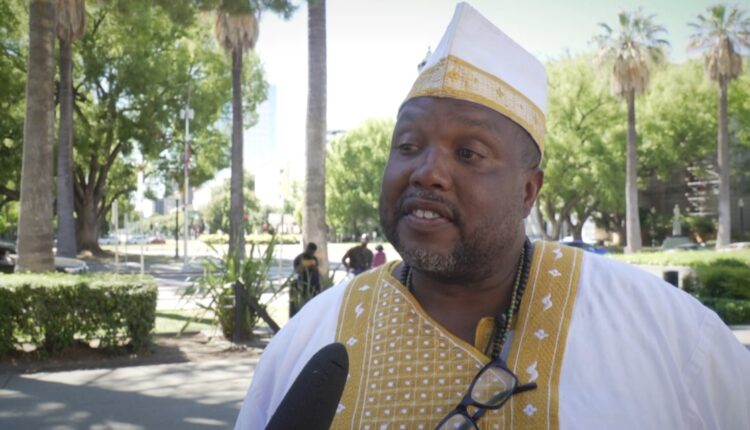 While Father’s Day has been nationally recognized and celebrated for more than 100 years, the holiday celebrating the emancipation of enslaved people in America known as Juneteenth became a Federal holiday just one year ago.

Juneteenth marks the day enslaved African Americans in Texas were given the news by Union soldiers they’d been emancipated on June 19, 1865. The date came two years after the Emancipation Proclamation by President Abraham Lincoln and one year after Congress had abolished slavery through passage of the 13th amendment.

Fathers across the Sacramento region chose to spend their special day at Juneteenth celebrations across the area.

Jerry Johnson visited the Capitol with his wife and adult daughter Sunday. He has been celebrating the holiday for years, Johnson said.

“It’s not just Black America. It happened in America so all American’s should celebrate the history,” Johnson said.

Marvin Fisher, an African American father of a biracial daughter, said the holiday has him reflecting.

“It’s a beautiful,” Fisher said. “This is a monumental moment in life, to reflect on where we’ve been, where we’ve come and who we are as a people.”

Michael Harris, an organizer of the National Juneteenth Observance Celebration, said the day he was reflecting on the cost of America’s deadliest war. Harris is a father whose adult daughter worked as a nurse and passed away from coronavirus during the pandemic.

“Even though it was a long time ago, there was generations that didn’t have a father on both sides because they died in battle for slavery to end,” Harris said. “And so as a nation, we need to reflect on that and look to the future to make Juneteenth a positive holiday for all Americans.”

Sacramento City Councilman Sean Lololee attended a Juneteenth event in Del Paso Heights in his district. He said it’s important to celebrate this event but that the work is not done. He made calls for investments in communities of color for business, youth and job.

The Origins of Juneteenth: Marking the end of slavery in the US