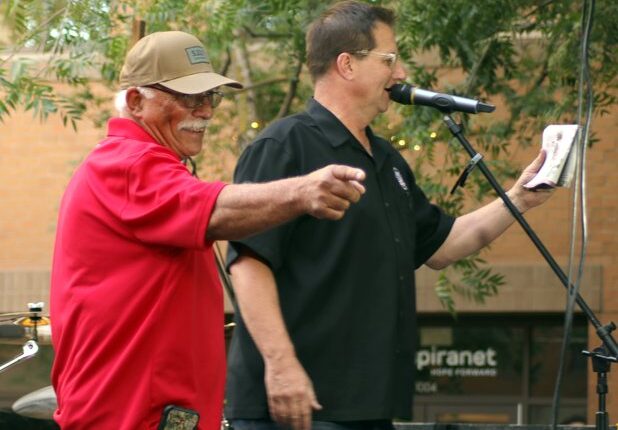 Turlock car enthusiasts Bob Rose and Ron Pippin were inducted as a “Legend of the Cruise” and their names placed on the Modesto Historic Cruise Route and Walk of Fame during Wednesday’s Graffiti celebration in front of the Tenth Street Plaza in Modesto.

Other recipients of the honor included Dan Vierra, a Lady of Mercy High graduate of 1961 who grew up on a dairy east of Turlock; and Vern Silva, a 1965 Turlock High School graduate.

Rose, a 1973 Downey High School graduate, has been a car enthusiast since a teen watching his father work on cars. He accepted the award and said it was a big honor.

“I just kind of fell in love with cars,” said Rose. “I built my first car at 22 years old. I’ve had several of them, I’m building one right now. I’m in between stages right now.”

Bob Rose of Turlock points to his star on the Walk of Fame noting that he is a 2022 “Legend of the Cruise” (JEFF BENZIGER/The Journal).

Earlier in his life Rose cruised McHenry Avenue on weekends.

“That was our enjoyment,” said Rose. “I had cars when I was young. My dad was a car guy. I grew up in a car culture from my dad and then everybody I hung with was a car person. My first car was a ’47 Ford pickup and I had other friends at school that had pickups and we’d always ride together.”

The retired landscape contractor remembers that his first vehicle was a ’38 Chevy four-door master. He later got into building cars “from the ground up.”

Rose is a member of the Faros Car Club which gathers once a month and plans club outings and activities and help out with community car events.

An adviser to the non-profit Graffiti USA Museum being constructed in the former Lyng’s building at 610 N. Ninth St., Modesto, Rose is excited about the progress being made.

“It’s going to be a great thing – we’re almost ready to start construction,” said Rose. “Our plans are finally finalized. We’re getting through the permitting with the city.”

The 45,000-square-foot building is less than a mile from the original Burge’s Drive-In, the legendary turnaround point in the Modesto cruising route of the late 1950s and early 1960s. Plans are for the museum to feature a vintage diner façade, a replica ’50’s diner, replica street scenes modeled after 10th and 11th streets, a radio history exhibit, American graffiti memorabilia and an exhibit highlighting the life and career of George Lucas, the Modesto native who produced the movie and went onto create the Star Wars empire.

Pippin is a 1975 Downey High School graduate who is helping in creating the museum. 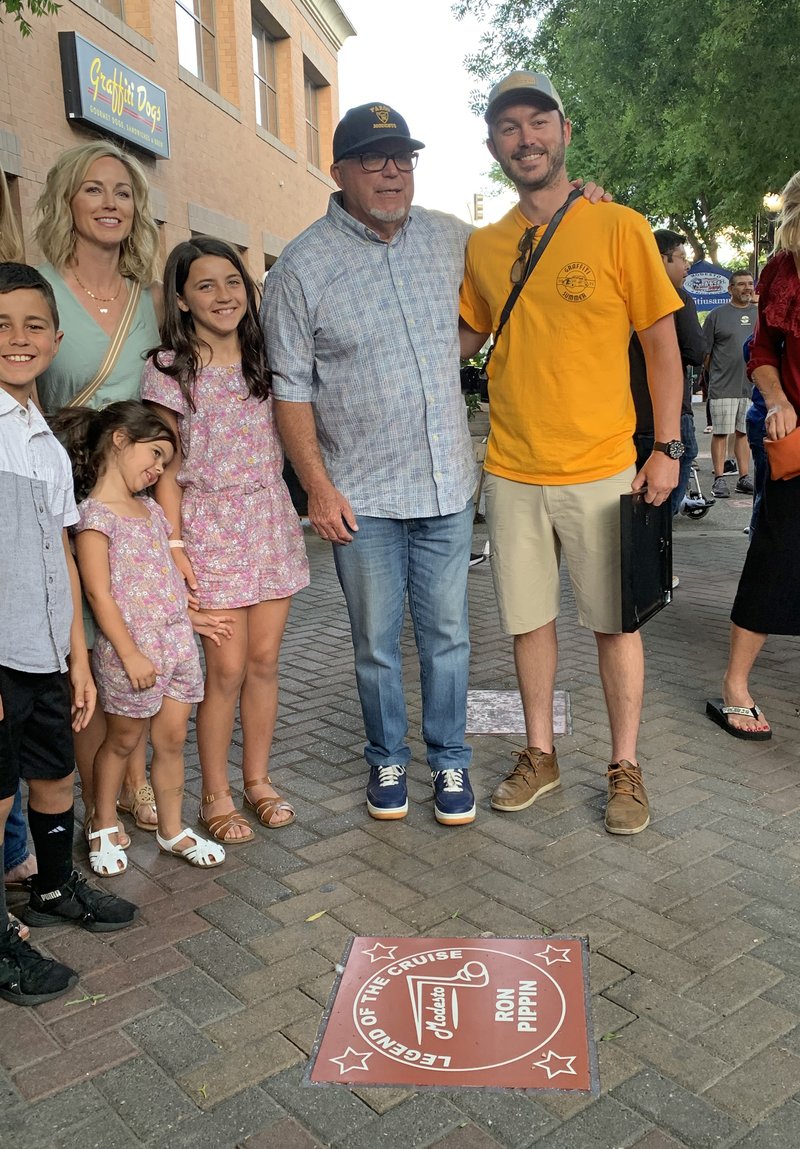 Family members join Ron Pippin of Turlock during the Wednesday unveiling of his “star” on the Modesto Historic Cruise Route and Walk of Fame (JEFF BENZIGER/The Journal).

“Ron Pippin’s networking with the construction industry has saved the Graffiti Museum countless dollars, countless hours, countless time and we owe a big debt to Ron and his team for bringing the builders’ community together, the Valley Builders Exchange,” said emcee Chris Murphy , founder of the Modesto Historic Cruise Route and Walk of Fame.

Pippin is president of the Faros Car Club, of which he has been a member since 1972. Through the decades he has remained embedded in the local car culture and today collects cars, vintage gas, oil and automotive related artifacts and signs.

Also given a star on the Modesto Walk of Fame was the Deacons Care Club, founded in 1962 at Downey High School in Modesto and still meeting. Twelve members of the club get together twice a year to remember and talk about their love of vintage automobiles.

Modesto City Councilwoman Jenny Kenoyer, who is battled cancer at age 87, was also named a “Legend of the Cruise.” She was also the grand marshal of Friday evening’s Graffiti Parade in Modesto. Kenoyer has been a supporter of the Graffiti USA Museum and the return of cruising.

Murphy led the crowd on Tenth Street into a moment of silence for the passing of actor Bo Hopkins, one of the stars of the movie American Graffiti who passed away May 28 at age 84. Hopkins appeared regularly in the Modesto Graffiti Parade and was a member of the Faros in the George Lucas movie.

Murphy called for audience members to show up at the Tuesday Modesto City Council which was to consider lifting the ban against cruising.

“A lot of people don’t realize that the cruise, back in the early 50s, in the late 40’s, people would come back from the war and they would cruise,” said Murphy. “People would come back from Vietnam and they would cruise. It wasn’t just the high school kids that were cruising; it was a lot of people from all ages that cruised 10th and 11th (streets). When Burge’s (Drive-In) closed in ’67 the McHenry (cruise) started to happen up there and there were all ages of people out there cruising and it was truly amazing.”

One of those who cruised in Modesto after coming home from Vietnam in 1968 was Vern Silva, a 1965 Turlock High School graduate. His first car was a 1957 Chevy which he spent “senior ditch day” working on. Vern, who raised a family with wife Josie of 54 years, was past president of the Modesto A Street Rod Association and an original member of the Untouchables car club in Turlock. Today he helps friends with car repairs and building cars from the ground up.

“Street rodding was a great family sport with things for the whole family to do at shows,” said Silva. “At that time we had the roadster that soon became too small for our family.”

“Vern was a mechanic, gunner in UH-1 Huey helicopter during the day and gunner by night and cruiser for life,” said Murphy in introducing Silva.

“We’ve had a lot of great times cruising and I’m overwhelmed,” said Silva, who used to cruise 10th Street and who recently drove his 1932 Ford Roadster to Canada.

“We hope to make it to Louisville, Kentucky in the next couple of years,” said Silva. “We’re not sure which one of our cars we will take – the 1957 Chevy, 1932 Ford Roadster, 1965 Buick Riviera or our son Randy’s 1969 Camaro but we know for sure it will be another adventure.”