Grenfell in numbers on the fifth anniversary of fire 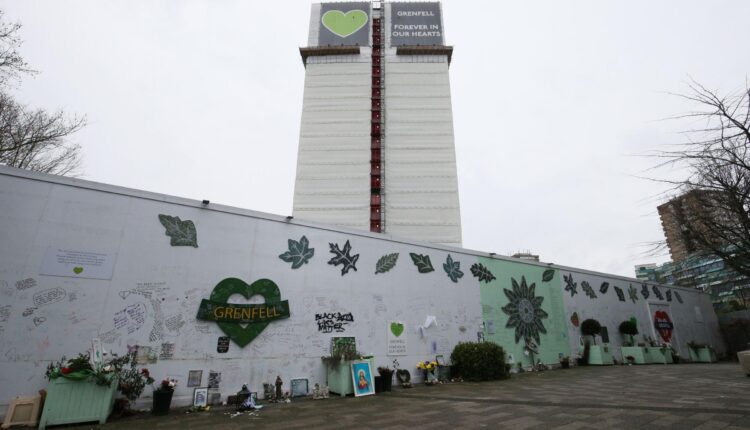 In the five years since the Grenfell Tower fire, there have been four housing secretaries, three evacuated families are still awaiting permanent homes, and two phases of a public inquiry into the tragedy.

Grenfell survivors and bereaved family members will mark the fifth anniversary of the deaths of 72 people on June 14 2017.

That poignant number is being displayed around North Kensington on green hearts, which have become a symbol of the tragedy.

It is the one statistic that will forever be associated with the fire.

It is five years since the Grenfell Tower disaster (Nicholas. T. Ansell/PA)

Here, the PA news agency breaks down the other statistics behind the tragedy and its aftermath.

– The response since the fire

201 – households needed rehoming after the fire. Three of these are still in temporary homes, according to the the Royal Borough of Kensington and Chelsea.

486 – buildings over 18m tall that were identified as having Grenfell-style cladding on them.

1,149 – Buildings in London that require emergency measures such as waking watches due to fire safety issues.

£406 million – approximate amount spent by the Royal Borough of Kensington and Chelsea on its response and recovery efforts as of May of last year.

1,730 – days since the opening of the Grenfell inquiry.

644 – the total number of core participants in the inquiry, including civil servants, politicians and survivors.

£149 million – amount spent by the inquiry as of March 2022. According to figures obtained by The Guardian, the overall cost – including legal fees not covered by the inquiry – is on course to exceed a quarter of a billion pounds.

96 – the number of people who former Department for Communities and Local Government secretary Lord Pickles said died in the Grenfell fire during his testimony to the inquiry.