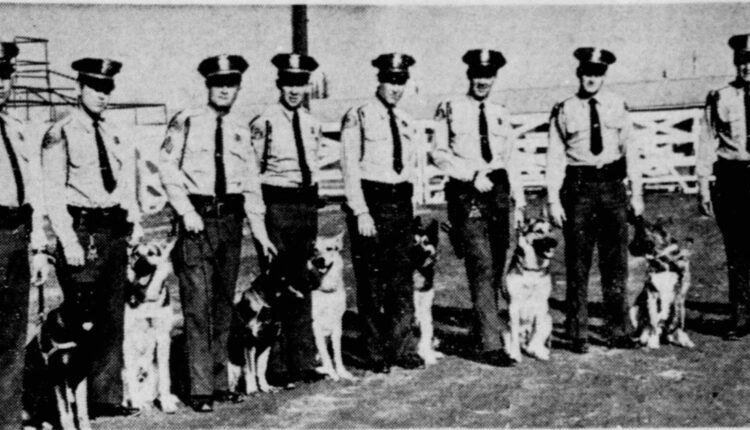 Realizing that his partner needed immediate assistance, the deputy tore through a three-quarter-inch plywood wall and attempted to chomp through a chain-link fence, breaking a canine tooth in the process. After emergency repair work on the tooth, the deputy earned the name Goldfanger. This was not an ordinary deputy and his partner was not actually in any danger. Instead, the deputy was a 94-pound German shepherd named Duke and his partner, Deputy Dave Merritt, what in a training session for the Kern County sheriff’s canine corps.

The integration of dogs into law enforcement dates to World War II and the establishment of the Quartermaster K-9 Corps. After the attack on Pearl Harbor, the American Kennel Association joined with Dogs for Defense to encourage dog owners to donate qualified dogs to the Quartermaster Corps where they were then trained as war dogs and inducted into the armed forces. Proving to be a success in both the European and Pacific theaters of war, the addition of canine officers to law enforcement agencies during the postwar era spread across the nation.

The Kern County Sheriff’s Office was the first sheriff’s department in California to establish a canine corps. It was initiated in October 1960 by Sheriff LeRoy Galyen with approval of the county Board of Supervisors. Galyen first got the idea to implement the program in Kern County after seeing a demonstration of the Stockton city police’s canine unit. Galyen believed the program would be useful because, as he stated in the Dec. 19, 1966, Bakersfield Californian, “As population grows, crime increases, and there are never enough men to answer the calls.”

As the German shepherds who made up the canine corps were donated by community members, it cost the department about $500 to train each dog and about $180 a year for food and medical expenses. The bond between the human and dog partners was quickly formed as the two went home together after their shift. The first group of dogs to join the department included seven German shepherds and a Japanese Akita.

According to an article in The Californian from Feb. 1, 1976, “Only one in 20 dogs donated to the county qualifies for the corps. To be accepted for training a dog must show friendliness to people and steadiness in unfamiliar surroundings.” The use of canine patrol units also saved the county $80,000 per year that would otherwise be paid in salaries for additional officers.

The dogs also served the community in ways beyond fighting crime, which included demonstrations at the Kern County Library to youngsters who participated in the “Summer Reading Circus.” The women’s clubs, PTAs and scouts’ groups were also treated with demonstrations by the canine officers – more than 50 within the first five years of the program’s inception.

The canine corps was temporarily halted in 1977. The decision was not based on a negative reflection of the program but more about cost effectiveness at the time. As Sheriff Al Loustalot explained in the Nov. 21, 1977, Californian, “Programs come and go.” Eventually the program did return, as did the implementation of a canine unit within the Bakersfield Police Department in 1988.

Julie Plata is a historian and lecturer at Cal State Bakersfield and Cerro Coso Community College. The opinions expressed here are her own.