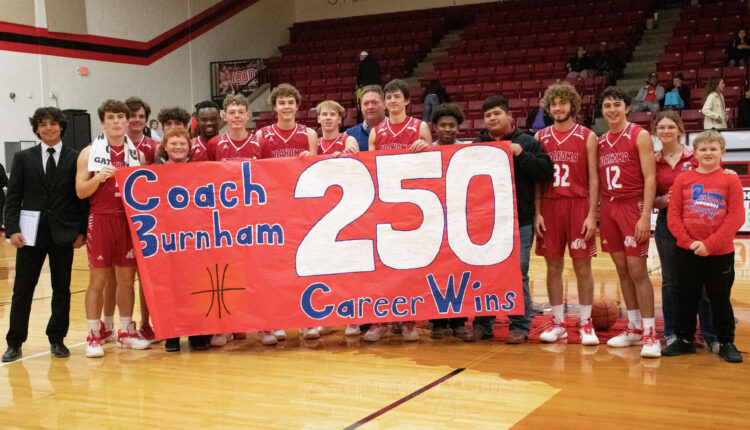 The Greenwood boys basketball team rolled to a District 3-4A road victory at Fort Stockton on Tuesday.

Conrad Morris led the Rangers with a game-high 19 points, Jovan Lopez had 16, Tatum Pierce had 15, and Shawn Kelly and Ty Presley each added eight.

Coahoma boys basketball coach Lonnie Burnam earned his 250th career win when his Bulldogs defeated Ballinger, 51-47, on the road in a District 6-3A game on Tuesday.

Ryan Shifflett led the Bulldogs with 13 points, Boyd Cox and Billy Bailey each had 10 points, while Austin Perkins, Devon Bennett and Landon Wells each added six.

Andrew Delgado had a game-high 34 points for Ballinger.

Coahoma next travels to Jim Ned at 8 pm Friday.

Zach Day scored a game-high 24 points to lead No. 10-ranked Midland Christian to a decisive TAPPS 1-5A road victory over Fort Worth Southwest Christian on Tuesday.

Day had six 3-pointers on the night. Josiah Wray added 15 points for the Mustangs and Andrew Fox had eight.

The Mustangs next host no. 8 Fort Worth Christian at 7:30 pm Friday in a key district game at McGraw Event Center.

the no 9-ranked Garden City boys basketball team steamrolled past Robert Lee in a District 11-1A game at Robert Lee High School on Tuesday.

Holy Cross fell to No. 8-ranked Amarillo Accelerate Christian in a TAPPS 1-1A home game on Monday despite an impressive performance from Ben Bowman.

Bowman led all scorers with 38 points, along with 13 rebounds, five steals and two blocked shots.

The Greenwood girls had no problem in a road blowout win over Fort Stockton on Tuesday.

Ballinger used a 25-9 run in the second quarter to spark a District 6-3A home victory over Coahoma on Tuesday.

Ballinger led 8-6 after the first quarter before the big second quarter helped the Lady Bearcats take a 33-15 halftime advantage.

Coahoma next travels to face Jim Ned at 6:30 pm Friday.