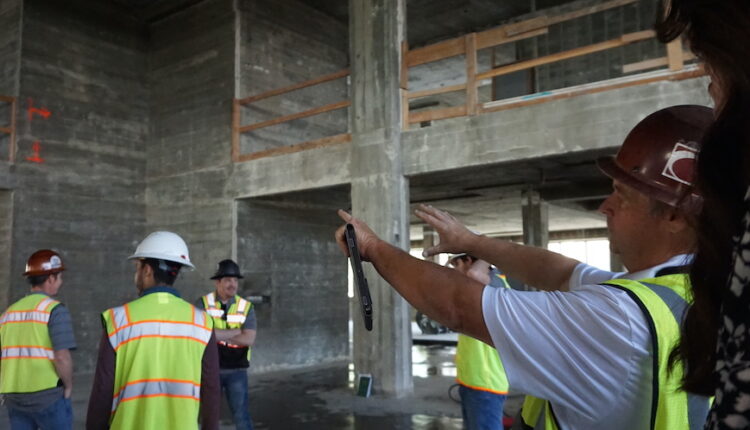 What contractors say would have been a project easier to demolish and rebuild is instead being restored, bringing more than 60,000 square feet of Class A office space to Downtown Fresno.

Representatives with Lance Kashian & Co. announced the renovation of what they are dubbing the Mariposa Building at 2314 Mariposa St., across from the Fresno Police headquarters.

“When the owners of River Park considered what they could or should do to help the Downtown revitalization, we knew we had to get involved,” said Tracy Kashian, senior vice president of marketing for Lance Kashian. “We knew it would take time, money and commitment, but we recognize the importance of having a strong downtown.”

The Mariposa Building at 2314 Mariposa St. is across from the Fresno Police headquarters in Downtown Fresno.

The 1940s-era three-story building with two levels below ground is currently being gutted and prepared for restoration.

Developers hope to have the project finished within 12 months, said Kashian.

The plan is to take the building to a shell and prepare it for tenants, whether that be a single tenant, as developers have done with the Rowell Building, or multiple tenants. Lance Kashian leased the nearby Rowell Building to the Fresno County District Attorney’s Office.

Elevators have to be relocated and centered to the building. That means taking down the several-inches-thick layers of concrete used to support the building.

Smith said there were only a handful of inspectors with the State of California to look over elevators.

The building was constructed in 1948 and the techniques used to erect the building are emblematic of the time.

Where framing would now consist of steel studs, builders used 2×6 wooden studs and encased them in concrete.

“The bones are phenomenal,” said Gonzalez.

Kashian said the concrete textures are a work of art.

Below the building was more office space that is being opened up to include 35 parking spots accessible to tenants.

On the exterior, some of the finishes will change, but features such as architectural shelves will be kept to preserve some of the more distinguishing features. A mechanical screen will be added to the exterior.

Many Downtown Fresno office buildings have the same kind of construction, said Smith, including the Small Business Administration building, where his company worked in 2009.

“You just have to have a good engineer who understands how they built this,” Smith said.

When River Park Properties III purchased the Mariposa building in 2017, the building was vacant, said Kashian.

They purchased the building for $2.2 million from The Craig and Cynthia Davis Family Trust, according to a deed filed with the Fresno County Assessor’s Office.

Kashian said she did not know who the last tenant was. A filing with the California School Directory listed one tenant as Outdoor Education School, which opened July 1, 1980 and closed June 30, 1989 under the Fresno County Office of Education.

Jimmy Cerracchio, President & CEO of the Downtown Fresno Partnership said while the Brewery District has attracted after-hours traffic, the daytime workforce is what fuels Downtown.

“Daytime workers are currently the backbone of Downtown Fresno and our economy down here,” Cerracchio said.
Cerracchio hopes the revitalization serves as an inspiration to other property and business owners.

“What do you do with this crazy building?” Smith said. “You know you could put a little spackle and some paint and put a Band-Aid on it and maybe move some people in. Or you could spend the money, which is substantial. It’s a project that’s over a year for us to bring it back into some sort of facility you can rent and be proud of renting.”

McClatchy students in Sacramento walk out to protest gun violence

Montana Hires a Medicaid Director With a Managed-Care Past