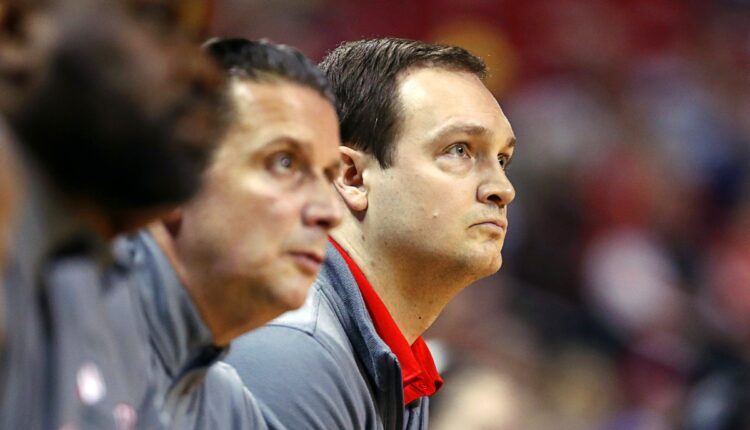 UNLV played with fire, and after 40 minutes of lackluster basketball on Saturday afternoon, they were handed a loss by lowly Fresno State, 76-63.

It’s the worst loss of the season for the Scarlet and Gray, who have now dropped four in a row to fall to 1-6 in the Mountain West (12-7 overall). That league record puts UNLV in a tie for last place with Wyoming.

Fresno State became the latest team to slice up UNLV’s defense, as the Bulldogs shot 54.3% from the field and registered their second-highest scoring performance of the season. Isaiah Hill made 7-of-12 from the field and tallied a game-high 28 points.

UNLV’s offense turned clunky in the second half, as Kevin Kruger’s squad made just 33.3% over the final 20 minutes. EJ Harkless led the team with 15 points but did so on inefficient 3-of-13 shooting.

UNLV will return to Las Vegas to host Wyoming on Tuesday; the loser of that game will find himself alone in last place.

UNLV is trying to make a run, but time is running short. With 3:50 remaining, Fresno State is still holding a 66-59 lead.

The Scarlet and Gray used a 6-0 run to get as close as 61-57, but Fresno has made five of its last seven shots to extend the lead.

UNLV is shooting just 38.1% from the field in the second half. EJ Harkless has a team-high 15 points, but it’s come on 3-of-12 shooting. If he can heat up — and UNLV can get a few stops at the other — there might be a chance for a comeback.

UNLV struggling to hang around at Fresno State

Fresno State continues to scorch the nets, increasing their lead to 52-47 with 12:21 remaining.

The Bulldogs have shot 55.6% from the field since halftime, including a pair of identical alley-oop dunks by Jordan Campbell. UNLV has few answers on the defensive end; Fresno has made 20-of-37 overall and 7-of-15 from 3-point range.

Jordan McCabe just knocked down a 3-pointer from the wing that prompted Fresno State coach Justin Hutson to call timeout. Remember that shot later if UNLV is able to keep hanging around.

Fresno State could not miss over the first 20 minutes, and at halftime the Bulldogs have built a surprising 37-33 lead over UNLV.

Coming into the game Fresno State ranked 321st (out of 363 Division-I teams) in offensive efficiency, averaging 0.92 points per possession. But they shot 53.6% in the first half and scored at an astronomic rate of 1.32 PPP. Isaiah Hill was the main catalyst, pumping in 13 points on 4-of-7 shooting.

UNLV has done its best to keep up. The Scarlet and Gray are shooting a respectable 50.0% from the field, led by strong halves from EJ Harkless (eight points), Keyshawn Hall (seven points) and Keshon Gilbert (six points). That trio has combined to shoot 7-of-11.

Eli Parquet played two stints in the half and totaled 14 minutes, which is more than most probably expected in his first game back from injury. The senior guard has chipped in two points, but UNLV is a minus-6 with him on the court so far.

This game hasn’t started the way UNLV hoped. With 10:33 left in the first half, slightly Fresno State has a 21-17 lead.

The Bulldogs have scored at will so far, knocking down 9-of-14 from the field and 3-of-4 from 3-point range. Isaiah Hill already has nine points to lead Fresno.

On a positive note, Eli Parquet checked into the game at the first media timeout, giving UNLV an important piece of its rotation. And freshman Keyshawn Hall has picked up where he left off on Tuesday at Fresno State, as he’s got four points in five minutes on 2-of-2 shooting.

UNLV will try to snap an ugly three-game losing streak this afternoon, when Kevin Kruger leads his squad on the road at Fresno State (3 pm, CBS Sports Network).

UNLV has been limping along with a thin rotation for the past six weeks, ever since starting guard Eli Parquet went down with a knee injury Dec. 10. Everyone else’s minutes got stretched beyond their ideal norms, and it seemed to adversely affect the team’s overall performance, especially late in games.

That’s why it’s such a big deal that Parquet is nearing his return. He participated in practices Thursday and Friday and seems likely to play today at Fresno State. Even if he can only give the team 15 or 20 minutes, it will still be a welcome development considering Parquet’s impact on the defensive end.

Don’t expect Saturday’s contest to be an up-and-down affair. Fresno State plays at one of the slowest paces of any team in the nation, sitting 332nd out of 363 teams in KenPom’s adjusted tempo rankings.

That could be a problem for the Scarlet and Gray. They’ve matched up with two other extremely slow teams this season — Washington State (No. 339 in adjusted tempo) and San Jose State (No. 349) — and are 1-1 in those contests.

“They do an unbelievable job of playing most games at the pace they want to play at,” Kruger said. “We can’t get discouraged, and we can’t take a break. The second you relax, that’s when they can really hurt you. We’ve got to do a really good job of being focused and locked in and understanding that we’ve got to guard a lot of each shot clock.”

UNLV has had a very stable rotation this season, but Kruger made his first performance-related tweak to the starting lineup against Utah State on Tuesday when he swapped out center David Muoka and replaced him with Victor Iwuakor.

Muoka had started the first 17 games of the season, but Kruger said he wanted Iwaukor to provide a spark to the starting unit.

It was a drastic change. Iwuakor got 32 minutes of playing time, while Muoka logged just three minutes.

The move did not produce the desired results. The starters got outscored, 12-10, in nearly seven minutes of court time, which followed a pattern set through the first 17 games. UNLV has consistently been better with Muoka at center, posting better offensive and defensive ratings than when Iwuakor mans the middle.

Still, Kruger must have a hunch, because he said he’s planning to stick with Iwuakor in the starting lineup against Fresno State and, presumably, beyond that. We’ll see if it pans out.

When: Saturday, 3 pm at the SaveMart Center (Fresno, Calif.)