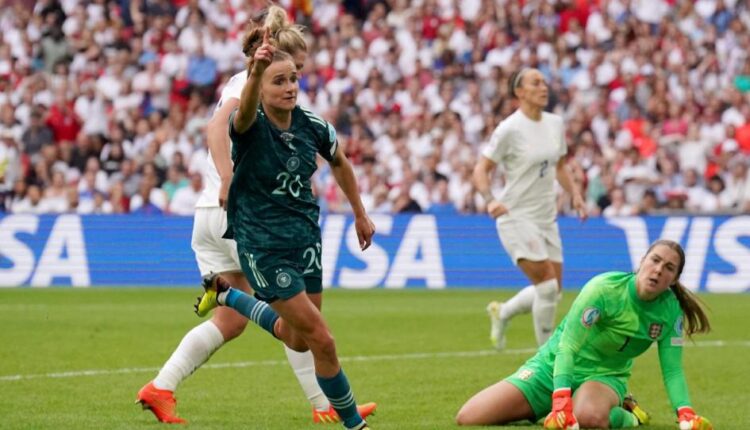 1856 – Back under way at Wembley with no further changes to the respective teams.

1851 – Full time! England 1 Germany 1. The final is going to extra time.
England, with Alex Greenwood and  Jill Scott sent on as late replacements, pushed for a winner in the closing stages but could not break down the German defence.

1836 – GOAL! Germany equalise! Sydney Lohmann feeds fellow substitute Wasmuth in the area and her low cross is turned into the roof of the England net by the impressive Magull.

Sealed with a kiss 😘

1834 – An attendance of 87, 192 has been announced at Wembley – a European Championship finals record.

1830 – Germany are pushing hard but are England holding firm as they still lead through Toone’s goal heading into the final 15 minutes.

1822 – Chance! Germany almost draw level straight away as Magull’s blistering drive comes back off the crossbar.

1819 – GOAL! England take the lead! It’s not Russo who makes the breakthrough but fellow replacement Toone. Keira Walsh’s superb 40-yard pass picks out the run of Toone in behind the Germany defence and the 22-year-old’s finish is equally sublime, lifting the ball over the outcoming Frohms.


1812 – Wiegman decides she has seen enough and makes a double change, sending on Manchester United duo Ella Toone and Alessia Russo for Kirby and White. Can super-sub Russo work her magic again for the Lionesses?

1805 – Chance!  Germany rampant at the start of the second half and England are relieved to see Lina Magull’s shot from near the penalty spot whistle just wide.

Strong start to the half! Waßmuth can’t find a way past Earps from the angle, before Magull fires one just wide 😬 (50′)

1803 – Chance! Early opportunity for Wasmuth after Millie Bright fails to cut the ball out near the touchline,  but the Germany substitute is denied by Mary Earps.

1800 – Germany kick off the second half having made a substitution at the break, with Jule Brand replacing Tabea Wasmuth.

1745 – Half-time! England and Germany go into the break locked at 0-0 following a first half where clear-cut chances have been at a premium.

1737 – Chance!  White is unable to keep her left-footed shot down after being picked out on the edge of the area by Mead, the striker’s effort climbing just over the crossbar.

1726 – Chance! Germany come close to taking the lead as Marina Hegering tries to bundle home a corner, but a host of England players on the line manage to keep the ball out. There was a VAR check after that incident for a possible handball, but nothing was given. 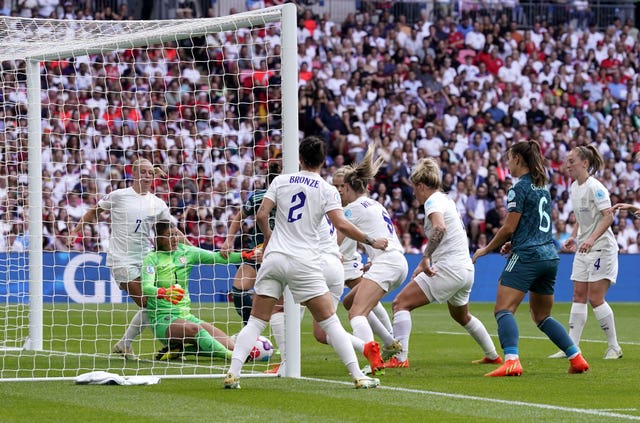 1723 – The Lionesses, who have won just two of their previous 27 meetings with Germany, have just picked up two yellow cards in quick succession with Georgia Stanway and White going into the book.

1719 – England are pushing for the opener and Lucy Bronze – having earlier made an important block at the other end – draws another save from Frohms with a header from a corner, although it is comfortable for the Wolfsburg number one.

1704 – Chance! Fran Kirby’s cross to the far post picks out Ellen White but her header is straight at Germany goalkeeper Merle Frohms. Good start from the hosts.

1654 – Huge breaking news coming out of Wembley – Germany captain and leading scorer Popp is out of the final!

Germany have announced that the 31-year-old striker suffered a muscle problem in the warm-up and has been replaced by Lea Schuller in the starting line-up.

It is a massive blow for both Germany and Popp, who missed the last two Euros through injury.

ℹ️ @alexpopp11 has suffered muscular problems in the warm-up. Lea Schüller replaces her in the starting XI 🔁

1645 – Now just 15 minutes to go until kick-off at Wembley. Both teams will be making their final preparations as the crowd – fast approaching capacity – gears up for showtime.

Just soak it in 🤩 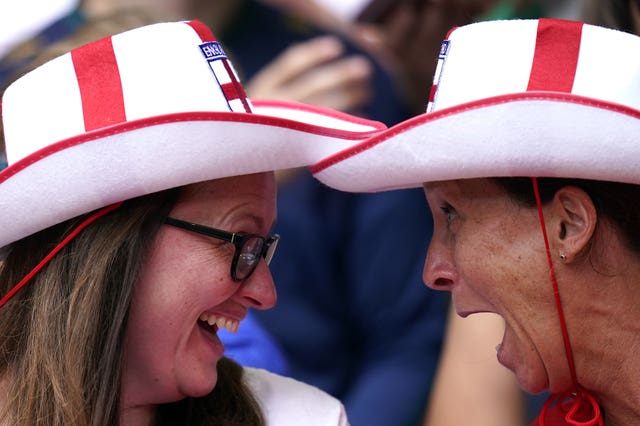 A record crowd is expected at Wembley (Danny Lawson/PA)

The @Lionesses squad are soaking up the atmosphere ahead of kick-off. Sarina Wiegman has named an unchanged team for the sixth @WEURO2022 match in a row pic.twitter.com/VwSWg1f86C

1610 – Wiegman believes the final will be one to enjoy for the fans.

“I think they will play a little more physical and we hope to have the ball a little more and play our possession game, but it’s going to be really close.”

Asked what her final words would be to her players before kick-off, she replied: “I don’t know yet. We know everything. Our plan is really clear. Everyone is really, really prepared and the final words will come in the dressing room.”

Wembley is filling up ahead of the ⁦@Lionesses⁩ bid to make history with a first European Championship #ENGGER #Lionesses #WEURO2022 pic.twitter.com/XFNcuj8Qjj

Unsurprisingly, England manager Wiegman has named an unchanged side for the sixth Euro 2022 match in a row.

Voss-Tecklenburg has also opted against making changes to her starting line-up from her side’s semi-final victory over France.

Your #Lionesses team for the #WEURO2022 final! 👊 pic.twitter.com/pqYxnGcVMM

An unchanged @DFB_Frauen starting XI to face the @Lionesses 📋

1543 – Better news for Germany forward Klara Buhl. She was ruled out of the final earlier this week after contracting Covid but she tested negative on Sunday which means the 21-year-old will at least be able to cheer her team-mates on from the stands at Wembley.

There is some good news to report, however! Klara has now tested negative and won’t have to sit alone like this anymore 😁 She will be supporting us from the stands in Wembley! 🙌

1530 – England go into the final having won all five of their matches at Euro 2022, scoring 20 goals and conceding just once.

Germany also boast a 100 per cent record at the finals, while scoring 13 goals and conceding one. 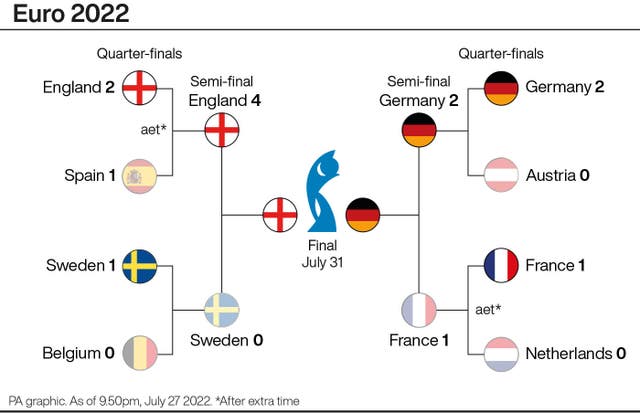 England and Germany fans gearing up for the @WEURO2022 final. Kick-off is at 5pm pic.twitter.com/c1kP5Y5aZP

1520 – More messages of support for England.

Absolutely buzzing for this!! So proud of every single player and staff member for taking this country on an amazing journey… one last game, one last push… COME ON MY GIRLS BRING IT HOME 🏴󠁧󠁢󠁥󠁮󠁧󠁿🏆 #Lionesses https://t.co/DjxZDiBJAW

1510 – The team coaches have arrived at Wembley Stadium, less than two hours to kick-off now.

Wembley way is already packed ahead of the @WEURO2022 final and such a great atmosphere pic.twitter.com/HxryMnP8RA

1450 – England have never won the Women’s Euros before, with their best performances coming in 1984 and 2009 when they reached the final before losing to Sweden and Germany respectively.

Germany, in stark contrast, have a formidable record in the competition. They have won eight of the 12 editions to have been played, with the next-most successful nation being Norway with two wins.

The good news for England is that in Sarina Wiegman they have a coach who knows what it takes to win the Euros. The Dutchwoman led the Netherlands to victory five years ago on home soil, and her experience could prove invaluable to the Lionesses. 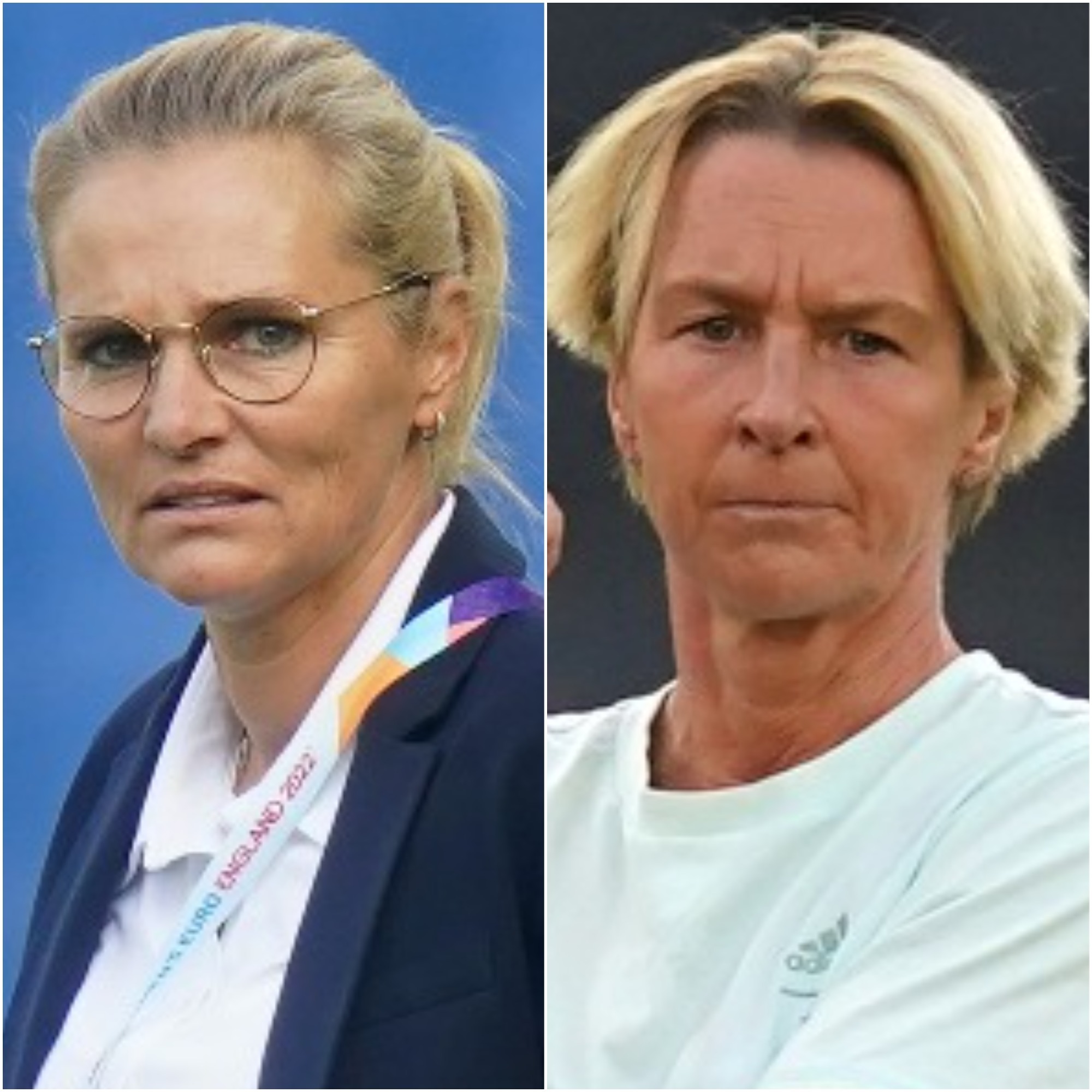 And so to the final… pic.twitter.com/l885Hfxu08

1420 – The Lionesses have received a “best of luck” message from the Duke of Cambridge while seven-year-old Princess Charlotte said: “I hope you win”. Prime Minister Boris Johnson, Labour leader Sir Keir Starmer and England men’s team captain Harry Kane are others who have sent their best wishes.

1415 – Support has been pouring in for the players ahead of the final.

Good luck to everyone involved in the Women’s Euro Final and especially my club mates @ellatoone99 , #MaryEarps and @alessiarusso7 🔴

Wishing the @Lionesses the best of luck today. It’s been an unbelievable effort so far and just one last game to go. Enjoy the occasion. Come on England 🏴󠁧󠁢󠁥󠁮󠁧󠁿 #Lionesses

1410 – An interesting sub-plot to the final will be the battle to win the Golden Boot as the tournament’s leading scorer. 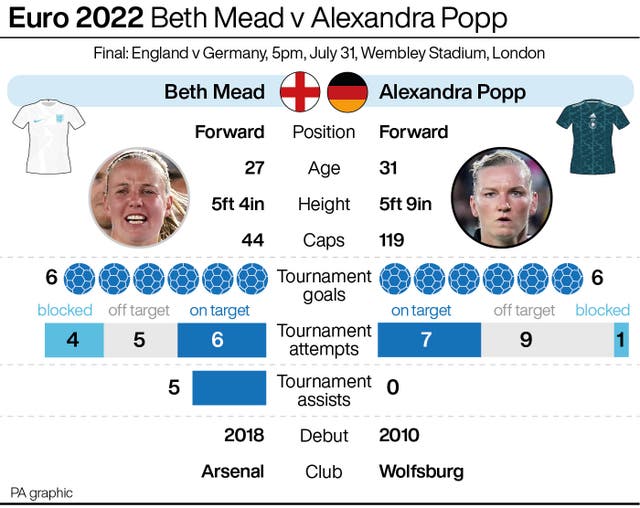 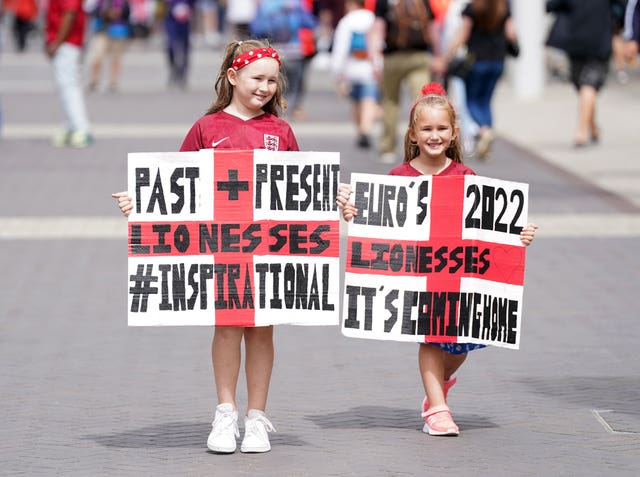 
1405 – With the 88,100-capacity Wembley Stadium sold out for the clash, a number of attendance records are likely to be set today.

The all-time record for a European Championship final – men’s or women’s – was set in 1964 when 79,115 spectators saw Spain take on the Soviet Union at Real Madrid’s Bernabeu stadium, while the previous record attendance for a women’s international in Europe is the 80,203 that watched the 2012 Olympic final between USA and Japan at Wembley.

1400 – Good afternoon and welcome to the PA news agency’s Euro 2022 final blog. Stay here for all the build-up, key match action and post-game reaction as England and Germany clash at a sold-out Wembley Stadium.