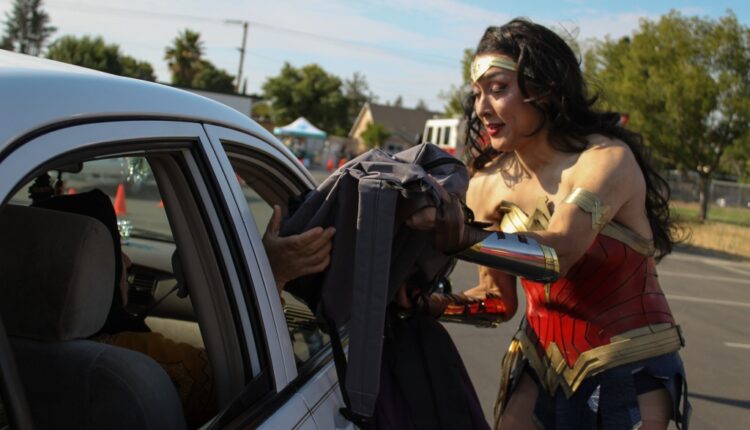 The event was aimed at supporting more than 1,000 local students from families preparing to send their children back to school while navigating uncertain times due to the COVID-19 pandemic.

“It’s needed this year more than ever, especially with the rise in the cost of living,” Jeneba Lahai, executive director for the YCCA, said. “We’re just trying to provide tangible support.”

Lahai explained that with the help of community donations the YCCA planned on distributing 1,600 backpacks filled with school supplies for K-12 students.

She noted that some families had been lined up in their cars since 3 am just to make sure they’d be able to get much-needed school supplies for their kids.

The alliance and volunteers from several local organizations handed out new backpacks filled with school supplies, snack bags and health and safety resources for students from kindergarten through twelfth grade, according to a YCCA press release.

Bernadette Austin, cubmaster for West Sacramento Pack 49, attended the event with several cub scouts who volunteered to hand out bags with food and snacks to families.

“West Sacramento is incredibly diverse,” Austin began. “We’re ethnically, racially and economically diverse so it’s great to be able to provide opportunities for the different members of our community to come together and support one another.”

She added that West Sacramento also offers lots of opportunities for youth to give back – such as Out of the Box and Wes Sac Kids Give – to the community throughout the year.

“I think it’s a great way to model giving back so that they learn volunteerism and community service before they become adults,” Austin stressed.

Kalani Makanani handed out backpacks to families during the event dressed in a Wonder Woman costume to make the experience fun for kids.

“We’re just here to work and support the kids,” Makanani explained. “I’m with a group called League of Heroes Inspired and our group supports children. We’re hoping in the future to make visits to terminally ill children and kids with cancer.”

Makanani noted that some of the league members are also TCA (Therapeutic Cosplay Actor) certified.