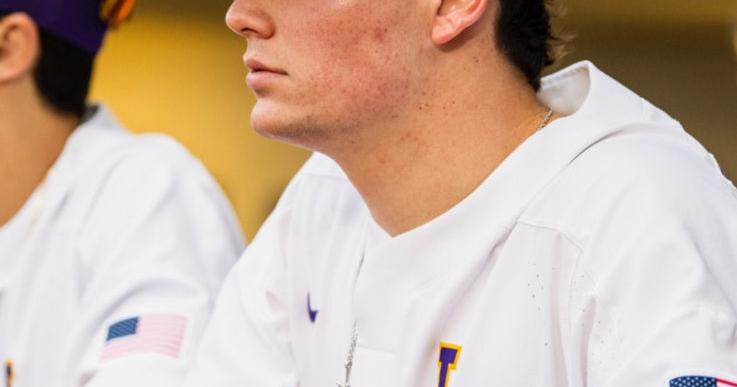 A meandering college journey spanning three sports and three schools in four years has taken another turn, as Easton McMurray is headed back to the pitcher’s mound.

His father Brock told The Californian on Wednesday that McMurray will be playing for The Master’s University, at NAIA school in Santa Clarita. This will reunite McMurray with his sister Emma, ​​a member of the Mustangs’ swim team.

Coming out of Liberty, McMurray got the chance to fulfill his dream of playing baseball at LSU. But he immediately found himself dogged by shoulder and neck injuries that drained his motivation to play the sport.

After abortive attempts to pick up football and tennis at Bakersfield College, McMurray was drawn back to baseball as a position player, this time at Fresno City College during a shortened 2021 season. Working with player development program Driveline Baseball, McMurray eased his way back into pitching, regained his velocity and is apparently ready to take on college baseball again.

Top golfer: Maverick Pavletich is no stranger to success in Ventura County, where he was Junior Tour Player of the Year in 2018-19, but earlier this month he opened his offseason with a significant victory further up the coast. The former Garces and current University of the Pacific golfer picked up an impressive win going into his senior season, taking first place at the Paso Robles City Golf Championship by shooting a second-round 68 for an overall score of 143. Pavletich had three top- 10 finishes for the Tigers last season, highlighted by a 7-under 206 in the Visit Stockton Invitational, and looks to build momentum entering the fall.

Running the road: It did not take long for Cal State Bakersfield to start populating its dormant athletic calendar with late-summer events. After posting its swimming and diving schedules earlier this month, the school unveiled the women’s soccer schedule as well on Wednesday. The Roadrunners will look a lot different after taking a big step back in Sebastian Vecchio’s third season as head coach with a 3-14-2 record — the 2022 roster currently lists 14 new players. CSUB opens the year with a pair of home exhibitions before the beginning of the season proper on a five-game road trip. Big West Conference play begins at home Sept. 15 against CSUN.

Bucking the trend: One of Bakersfield’s top football prospects is off the market, as Liberty defensive end Grant Buckey announced his commitment to USC Wednesday. Buckey, an incoming senior who is listed at 6-foot-5 and 265 pounds, had six sacks for the Patriots last season, and had previously picked up offers from schools such as Arizona, Oregon, UCLA and Stanford. The Cardinal’s offer was particularly noteworthy because Buckey’s older brother Zach and father Jeff, a former NFL offensive lineman, have both played at Stanford. But Buckey opted for a different path, choosing to join the Trojans just a few days after his official campus visit.

Even more movement: The transfer portal never sleeps, of course, but one of the week’s most notable transactions did not involve an athlete. After nearly seven years in Bakersfield, former CSUB Assistant Athletics Director for Special Projects Logan Belz made his official departure on June 13, following former Director of Athletics Kenneth “Ziggy” Siegfried to Evansville, where he will serve as Associate Athletics Director for Revenue Generation. Belz served as an indefatigable ticket salesman for the Roadrunners while also working on a variety of fan engagement projects, and his departure creates another hole for CSUB to fill as it looks for Siegfried’s full-time replacement.

Ridgeview alum and professional basketball player Erica McCall was on the Washington Mystics’ roster entering the spring but was quietly waived before the WNBA season began, as she said on Instagram. But McCall, the scion of one of Bakersfield’s prominent basketball families, won’t be waiting long for her next opportunity. On June 2, she signed with Spanish club Perfumerías Avenida of Salamanca. McCall has previously played in Hungary and Turkey and hosts a podcast about overseas basketball.

Pennridge High students use STEM to build guitars from scratch