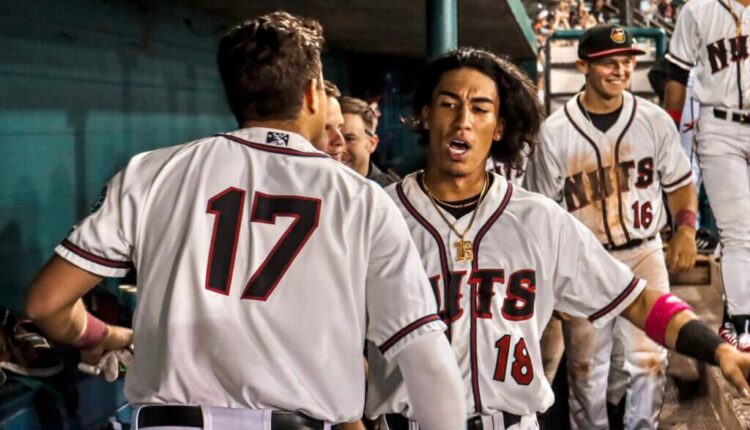 MODESTO, Calif. — The shortstop has an arm, though chances are you’ll never get to see it unless you show up hours before a Modesto Nuts game and subject yourself to the blistering sun to watch the team work out at John Thurman Field.

There, out on the outfield grass, you might see Nuts shortstop Edwin Arroyo show off his arm — but not his right one. When he wasn’t playing shortstop as a teenager, Arroyo — who is ambidextrous — pitched left-handed and he isn’t shy about showing anyone who wants to see.

“You should see Edwin … tossing the ball around in the outfield,” said Nuts manager Austin Knight. “It’s impressive.”

Make no mistake, though, the Mariners are far more interested in Arroyo’s right arm, his range and, of course, his bat, all three of which have shown up in a big way for the Nuts this season.

In fact, there might not be another position player in the organization — or player period — who has seen his stock rise as fast as Arroyo’s has this season.

Heading into Tuesday’s game at home against Lake Elsinore, Arroyo ranks seventh in the California League in batting average (.317). He has the 12th-most hits (69) of any player in the minor leagues, which is quite a feat considering he’s 18 — he turns 19 on Aug. 25 — and one of the youngest players in the league.

A switch-hitter, Arroyo had 10 home runs and has knocked in 43 runs with nine steals for the Nuts (27-30). He has a wRC+ of 138 and while he has a 22 percent strikeout rate, that’s not awful for a player so young who is routinely facing more experienced pitchers nearly every night.

To be sure, Arroyo is turning a lot of heads this season in Modesto.

“I made a comment the other day to one of my buddies back home, saying I think our shortstop is the best player right now in all of minor-league baseball,” Knight said. “It’s the hitting … but he’s making the routine play instinctually, high-level plays at shortstop, and he runs hard and he’s unafraid on the bases.”

There isn’t just a belief within the organization that Arroyo will remain at shortstop, but that his bat will continue to be a factor from each side of the plate as he matures. He’s hitting .292 this season against left-handed pitching and .324 against right-handed pitching.

“I’ve pretty much been a switch-hitter my whole life,” Arroyo said.

Arroyo comes from good bloodlines, as his father, also named Edwin, played professionally in Puerto Rico. The elder Arroyo then worked on coaching his son. The two are close and talk every day. When Arroyo signed with the Mariners last summer, he and his family came to T-Mobile Park and dad made a stop in the team store.

“(Edwin Sr.) was just as excited to go to the team store as Edwin was,” said Scott Hunter, the Mariners’ amateur scouting director. “He looks like he can still play.”

The Mariners knew they were getting a sure-handed shortstop with good range and a strong throwing arm when they selected Arroyo in the second round of the 2021 draft. The only question was if his bat would catch up to his defense. He hit just .211 in his professional debut last summer in the Arizona Complex League.

This season, though, Arroyo started hitting right out of the chute and was named the organization’s position player of the month for April when he hit .288. In May, he raised the bar, hitting .314. He’s hitting .372 in 10 games this month. Professional baseball, it seems, suits Arroyo well.

“Honestly, I’ve been waiting for this moment my entire life, I’ve been working for this,” he said. “It’s a long season, but this feels good. I’m just going to keep doing my job and helping the team and try to become a better player.”

Even if that means his pitching days are officially over.

“I really liked pitching, and it was a good experience for me,” Arroyo said. “Whenever (former teams) asked me to pitch, I would never say no. I can get a little wild sometimes, but it’s always fun. But I like hitting more.”