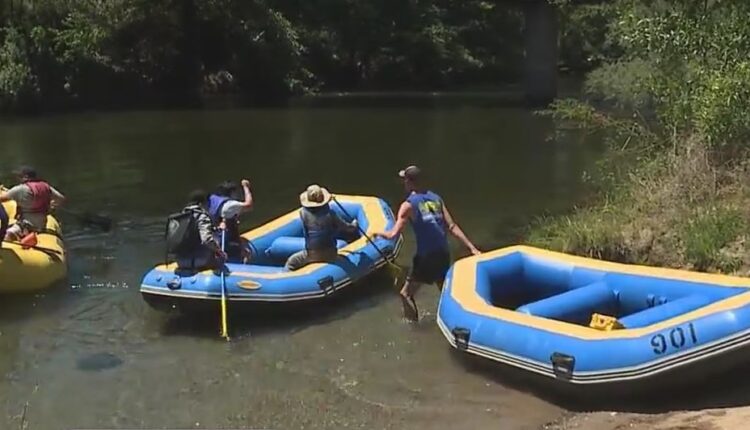 MODESTO, Calif. (KTXL) — Modesto firefighters are reminding people of the importance of water safety after rescuing six people from the Stanislaus river Sunday near Knights Ferry.

“We have definitely seen an increase in numbers of people coming out here,” Joshua Jacobson said.

Jacobson, with Sunshine Rafting Adventures, said they launch 70-80 rafts a day along the Stanislaus River.

“I’d say we try our best to make sure that everybody’s informed about what they’re kind of getting into,” Jacobson told FOX40.

“The rafting does look quite fun. I never, never rafted before so it’s something I would definitely want to do,” visitor Charles Marovic said.

Trying to stay cool this summer? These are the rivers, lakes, pools and water parks in the Sacramento area

They said they make sure their customers are wearing life vests and give a safety briefing before customers get into the water. However, they said they see plenty of private rafters who aren’t as prepared.

“Most people think this is just a lazy river, and at times, it is. But there’s also other aspects of worrying about trees and then just making sure that you have the right equipment for going down this river,” Jacobson said.

On, Sunday, Modesto Fire crews made six water rescues on two different calls where rafters overturned and couldn’t make it out of the fast-moving water.

Autry, with Modesto Fire, said thankfully everyone made it out safely so far this weekend but said unfortunately there are drownings in the area every year.

“A slow year we run usually around 60 water rescues. In a busy summer, we can run anywhere between 100 to 150 water rescues,” Autry said.

Jacobson said they try to give visitors advice when heading down the river and said their staff often helps pull people from the water.

“We try to work well with the fire department and private rafters at the same time. We also have all of our employees stationed out there so if any private rafters need help, they can go to our people on the water who will help them out,” Jacobson explained.

Firefighters are reminding people of basic water safety tips including always having a float plan, meaning to let someone know where and when you plan to start and finish a trip out on the water.

“Wear a Coast Guard-approved life jacket, try to avoid alcohol, and if you’re not a great swimmer, we suggest that you just stay out of the water,” Autry said.

Modesto Fire is also reminding people of its life jacket loan program where people can borrow however many vests are needed in order to stay safe.