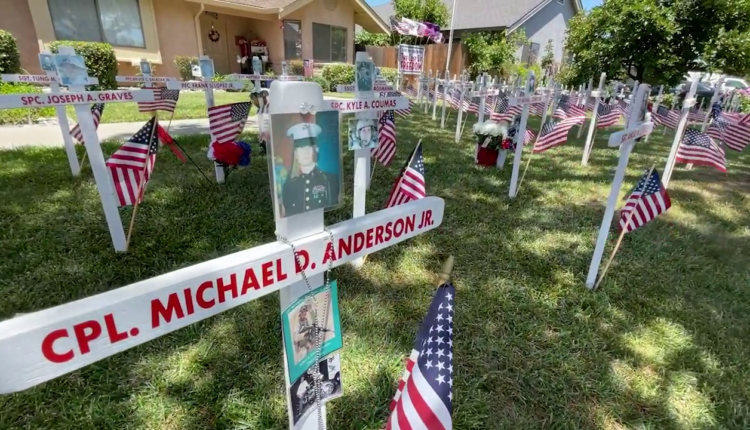 MODESTO, Calif. (KTXL) — Lawns around the country are filled with American flags this weekend to remember the fallen, one lawn in Modesto honors the fallen who grew up and went to school there.

Every Memorial Day weekend, Dan Joseph brings out the crosses, the names, and the pictures of local men and women who died serving our country.

“Men and women that went to school here, lived here, was raised here. And then they decided to defend our country and then they went and died and died for that freedom,” Joseph said.

Many celebrate the unofficial start of the summer on Memorial Day weekend but there are families and flags to remind you why we’re able to celebrate.

“Yes we’ll have barbecues, yes we’ll have picnics, and that’s all great. I’ll do it. But the bottom line is, we got to remember, we got to memorialize… the ultimate sacrifice that these guys made to keep us free,” he said.

Joseph explained that his reasoning for this tradition was so that people in the area won’t be forgotten.

“The number one fear of a Gold Star family is that the memory and the sacrifice that their loved one gave for our freedoms will be forgotten. And that was my main motivation for doing this memorial is so that I can keep the memory of their loved ones alive.”

According to Joseph, people stop by frequently from neighbors to veterans and even parents.

Mike Anderson Sr. lost his son in 2004 during combat in Fallujah, Iraq. For Anderson Sr. the time spent remembering his son is worth it all.

“This is a memorial backflip for my son corporal Michael D. Anderson JR, the United States Marine Corps as of the Date of Death, and Were in Iraq Along with the Marine Corps Globe, An ancho,” Said Anderson Sr.

“He had a whole life ahead of him. He raced BMX bicycles, he rode and raced motorcycles as a young man, rode Harley’s as he got older. Typical California boy, blonde hair, blue eyes, and had a good time in life and decided to go fight for this nation,” he continued.

Joseph says there are 82 crosses on his lawn and 60 of them memorialize local warfighters who passed on but he says not all 60 died in combat.

“Some of these soldiers and Marines committed suicide and as far as I’m concerned, they’re a casualty of war,” he explained.

Anderson says he is grateful to have met Joseph and to be able to work side by side with him to bring awareness to these names and faces.

“I’ll spend time at the cemetery. I’ll Spend Time at a Number of Different Events This Weekend Speaking At Some of Them, But to Be Able to Come To A Person’s Home and See This Similar to A Little Arlington If You Will … there from here Locally, so for somebody to represent and have their names posted for everybody to see… It’s tremendous,” said Anderson.

KHN’s ‘What the Health?’: Taking a Shot at Gun Control